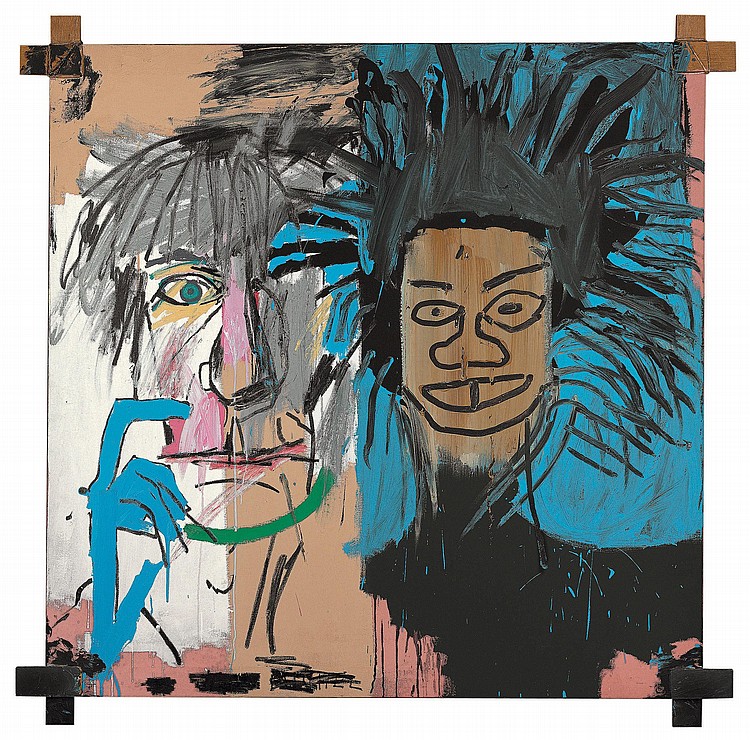 'Down to meet Bruno Bischofberger (cab $7.50). He brought Jean-Michel Basquiat with him. He's the kid who used the name 'Samo' when he used to sit on the sidewalk in Greenwich Village and paint T-shirts, and I'd give him $10 here and there and send him up to Serendipity to try to sell the T-shirts there. He was just one of those kids who drove me crazy... And so had lunch for them and then I took a Polaroid and he went home and within two hours a painting was back, still wet, of him and me together. And I mean, just getting to Christie Street must have taken an hour" (A. Warhol, 'October 4, 1982", The Andy Warhol Diaries, ed. P. Hackett, New York, 1989, p. 462).

Painted in 1982, Dos Cabezas is the historic painting that resulted from Jean-Michel Basquiat's first meeting with his idol, Andy Warhol. Basquiat painted Dos Cabezas, a double portrait showing Warhol next to Basquiat, within only hours of meeting his hero, had it delivered to the Factory, the paint still wet, emphatically indicating the younger artist's enthusiasm and excitement on meeting the King of Pop. Stylistically, the two artists appear diametrically opposed: the cool silkscreens and deliberate distance that Warhol employed in his work is a million miles away from the vivid, vigorous scrawl with which Basquiat rendered the two heads in this painting. However, this contrast led to the important friendship between Basquiat and Warhol, which would have a marked effect on both artists in the coming years and would be immortalized in Julian Schnabel's celebrated 1996 biopic, Basquiat, where they were respectively played by Jeffrey Wright and David Bowie.

Warhol had long fascinated Basquiat, and he read about Warhol often. During the late 1970s, Basquiat sold T-shirts and postcards decorated with his own designs, becoming a well-known figure, and indeed Warhol himself actually bought one of his postcards then. But it was on October 4, 1982 that their friendship truly began. The meeting came about through Bruno Bischofberger, the art dealer. Bischofberger had an arrangement with Warhol that the latter would make portraits of any young artists in the dealer's stable, usually in return for a painting of Warhol's choice. This arrangement benefited everybody, as it meant that Warhol remained in constant touch with art scene developments, while the younger artists benefited from his attention. However, this hit a whole new level with Basquiat, whose own energetic pictures inspired Warhol to return to painting, not least in their Collaborations. Meanwhile, Warhol sponsored the young artist - he later found him a studio on Great Jones Street that would remain Basquiat's base until his death - that gave him some much-needed stability. This friendship began in 1982, a year Basquiat would later reflect upon by saying: "I had some money; I made the best paintings ever. I was completely reclusive, worked a lot, took a lot of drugs. I was awful to people" (J. Basquiat, quoted in R. Marshall (ed.), Jean-Michel Basquiat, exh.cat., New York, 1993, p. 241).

Bischofberger, who facilitated the meeting, recalled the events in question in an essay published in the exhibition catalogue for this year's Andy Warhol: The Last Decade, currently taking place at the Baltimore Museum of Art:

"Warhol photographed Basquiat with his special Polaroid portrait camera. Jean-Michel asked Warhol whether he could also take a photo of him, took some shots and then asked me to take some photos of him and Warhol together. We then wanted to go next door to have the customary cold buffet lunch. Basquiat did not want to stay and said goodbye. We had hardly finished lunch, one, at most one and half an hour later, when Basquiat's assistant appeared with a 150 x 150 cm (60" x 60") work on canvas, still completely wet, a double portrait depicting Warhol and Basquiat: Andy on the left in his typical pose resting his chin on his hand, and Basquiat on the right with the wild hair that he had at the time. The painting was titled Dos Cabezas. The assistant had run the ten to fifteen blocks from Basquiat's studio on Crosby Street to the Factory on Union Square with the painting in his hands because it wouldn't fit into a taxi" (B. Bischofberger, 'Collaborations: Reflections on and Experiences with Basquiat, Clemente and Warhol", pp. 198-202, Andy Warhol: The Last Decade, exh. cat., Milwaukee, 2009, pp. 199-200).

Joe Torton, the assistant in question, recalled that he had to stop a van in the street to carry the Dos Cabezas to the Factory, having seen Basquiat create it in a frenzied whirlwind of activity upon returning to the studio, basing it on the Polaroid of the two artists taken by Factory photographer Christopher Makos. Basquiat had grabbed a picture of restaurateur Mr. Chow from a series he was creating, and then covered it with this new double portrait before dispatching Torton to deliver it to Warhol (see P. Hoban, Basquiat: A Quick Killing in Art, London, 2008, p. 140). According to Bischofberger, 'The whole Factory and everyone who was there was admiring it, and Andy said, "I'm really jealous. He's faster than I am.' Those were his words. I can still hear him saying that" (Bischofberger, quoted in ibid., pp. 140-141). Bob Colacello recalled Warhol admiringly telling Basquiat, "I mean, you're faster than Picasso. God, that's greaaaat" (B. Colacello, quoted in ibid., p. 141).

Warhol, the silkscreen master, appreciated speed, and would often produce many works each day with his assistants. However, he owed this speed to the technological processes he used, printing his works from a pre-fabricated template. By contrast, Basquiat derived the speed so evident in Dos Cabezas from passion, from an expressionistic surge of activity in the wake of meeting his hero. Basquiat even explored the contrast between the two in the picture's dichotomy: he presents Warhol as a glacial figure, pale, his head topped with one of his notorious wigs; this starkly contrasts with the thrusting black marks Basquiat used to depict his own hair, as recorded in Warhol's portrait of him. Basquiat presents it as a thrusting group of black tendrils snaking into the picture surface's right half, as reminiscent of Franz Kline's paintings as of Basquiat's hair as recorded in Warhol's portrait and contemporary photographs.

Dos Cabezas remains their only joint portrait. However, Basquiat and Warhol would create several portraits of each other during the following years, reflecting their intense, often volatile friendship - richly documented in Warhol's narrated diaries from 1983 onwards, which include numerous references to Jean-Michel and his various activities. They paid mutual pictorial tribute to this friendship in the Collaborations they created, first alongside Francesco Clemente and later just with each other. We can see a more tragic, human aspect of it revealed by the spiral into which Basquiat descended following the sudden death of his mentor, during what was supposed to have been a routine operation. This picture, then, dates from their relationship's optimistic beginnings, when Basquiat was on the way up and Warhol was bouncing back, riding a wave of enthusiasm with a new generation of New York artists. Dos Cabezas is a calling card, a tribute offering, and the foundation of one of American art's most important friendships.