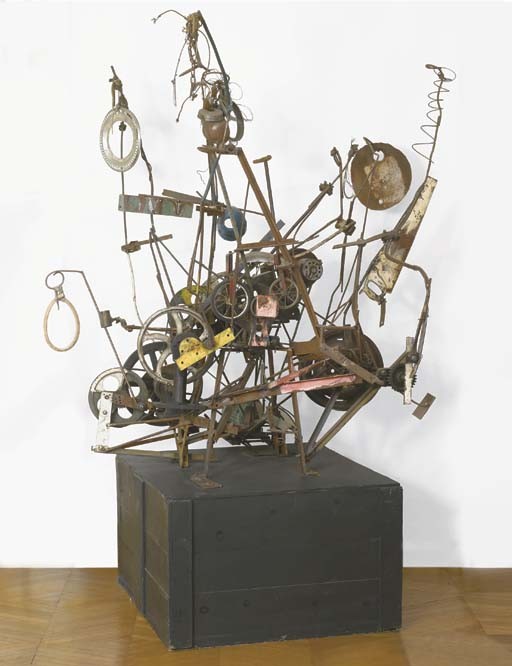 Acquired directly from the artist by the present owner.

PROPERTY FROM THE COLLECTION OF MICHELINE & CLAUDE RENARD

Residents walking through Stockholm's Nyroplan, one of its central squares, in 1961 were treated to an amazing sight: a mad contraption, a sculpture that was busily and frenetically trying to saw away at its own plinth. Executed by Tinguely in Stockholm in 1961 as part of the travelling Art in Movement exhibition, which had been in Amsterdam's Stedelijk Museum and which then went to the Louisiana Museum in Denmark, Narva is a large and historic example of Tinguely's moving sculpture, one which has been celebrated for its use of colour as well as its use of movement.

The year before Narva was created, Tinguely had been one of the signatories of the manifesto of Nouveau Réalisme. This movement, driven by the French poet and critic Pierre Restany, provided a loose umbrella to a variety of artists that included Arman and Yves Klein. The key link between all the artists was less an overall view of art or the world than the use of unusual materials. For Klein, this meant people, transcendental monochromes and other visual guides to a spiritual world, but to Tinguely it meant the use of found objects. He sought to create something that did not represent, that did not refer to anything outside itself. Instead, Narva comprises the junk and scrap of the real world, rearranges them in a new way and breathes into them new life. The various odds and ends that comprise this work speak of the salvation of salvage. These discarded elements emerge from and chart modern existence, with the endless sense of movement, the thrust of the machine age, of the jet age, of the capitalist age all rendered pointless, and therefore ridiculous. This machine sways, wheels spin, a saw moves around: it is not a constructive creation. Instead, in Narva Tinguely has surpassed Wilde's assertion that 'all art is quite useless', and has pointed to the absurdities not only of sculpture, but of technology and of life. The self-destruction inherent in Narva's constant sawing is an iconoclastic attack on the status of art in the world. In Stockholm, it appeared to try to cut down and escape from its own plinth, struggling against its being placed on a pedestal.

Tinguely pointed out that movement was the only great constant and certainty in life. We are all mortal, our lives are limited. What, then, asks Tinguely, is the point of living for tomorrow, when we should focus on today? Narva demonstrates this perfectly by constantly moving and shifting in a never-ending dance. This is not a monument to last a thousand years, but instead a monument that charts and celebrates each individual and finite moment, commemorating each passing second as it passes. This is accentuated in Narva, whose saw is a constant reminder of the sculpture's own mortality, and indeed is even a threat to itself. Narva thus exhorts us to 'Live in time. Be static. Be static - With movement. Resist the anguished fear that leads you to halt movement, crystallize the passing moment and kill what is alive. Stop insisting on self-destructive "values". Be free, live! Stop "painting" time. Stop building cathedrals and pyramids destined to fall into ruins. Breathe deeply. Live in the present: live in time and according to time for a wonderful and absolute reality' (Tinguely, 1959, quoted in ibid., p. 56).

To make this reality more wonderful, Tinguely has adorned various parts of Narva with colour. In doing this, he was adding to the entertaining appearance of his sculpture, but was also returning to his roots. The occasional pieces of metal that have been painted, including the saw itself, recall the lines and forms of Russian Suprematist painting. Some of Tinguely's earliest kinetic sculptures had been moving reliefs: in his Meta-Malevich works, forms reminiscent of Malevich's paintings moved in various directions and at various speeds, creating a strange and random ballet of Suprematist forms. On one hand, these works marked a brilliant evolution of the Suprematist ethos, and succeeded where many of them had failed, while on the other they punctured the rigidity and formality of those same works. In Narva, their legacy is further disrupted by the absence of a blank field. Instead, loosely coloured pieces of scrap metal now ape the forms and fields of Malevich.

This use of moving colour recalls one of Tinguely's most important influences - Alexander Calder. Years later, the young artist would recall that it was Calder who had opened the door for him, creating a medium in which he could work. It is not only in Narva's sense of colour that Calder is recalled, but also more crucially in its sense of fun. For Calder made sculptures that were filled with joy, that were toys for grown-ups (and sometimes for children too). Tinguely too used fun and humour in his work, which are all the more accessible and democratic because of it. They are eccentric contraptions that capture the viewers' imaginations. In Narva, the mad professor-like assemblage of scrap elements to create a beguiling moving sculpture, one that was successfully shown in central Stockholm and the next year in the Seattle World Fair, has strong hints of the complex, toy-like mobiles of Calder. Einstein is reputed to have stood enthralled in front of Calder's A Universe in the MoMA for forty minutes, watching its permutations as chance drove its rotations; one can hardly imagine what he would have thought of Tinguely's works, which push the role of moving parts to crazy and capricious new extremes.

There is an enchanting whimsy, an absorbing lack of logic in this ecstatically pointless machine. But Tinguely has gone further than Calder, has evolved his discoveries in order to fit his own ideas: in Narva, the sense of movement and play form a deliberate and humorous subversion of the utilitarian technology that has created automobiles, radios, aeroplanes and even factories such as the one where Tinguely's father used to work. Narva is a cheery attack on the age of the machine. In this, Tinguely embraces and celebrates a world of chaos. The idea of harnessing movement and the moment, of creating kinetic works that are driven by chance, by the fortuitous discovery of scrap and by the blind hazard of Tinguely's own mechanics all evolved from his fascination with DaDa and Duchamp. A native of Switzerland, he had known of the DaDaists' works and of Schwitters before he discovered - and became friends with - Duchamp. It was not only the role of chance, but also their destructive and iconoclastic drive that fuelled Tinguely to push his works further. Narva, sawing away at itself, is destroying art, capturing chance, assaulting redundant concepts of beauty, undermining the role of the artist, essentially fulfilling agenda of the DaDaists. The movements of the sculpture and its various components are driven as much by chance as by anything else. Its appearance, cobbled together from incongruous bits and bobs, is a whirring delight that attacks technology and, through it, the hegemony of logic and reason.