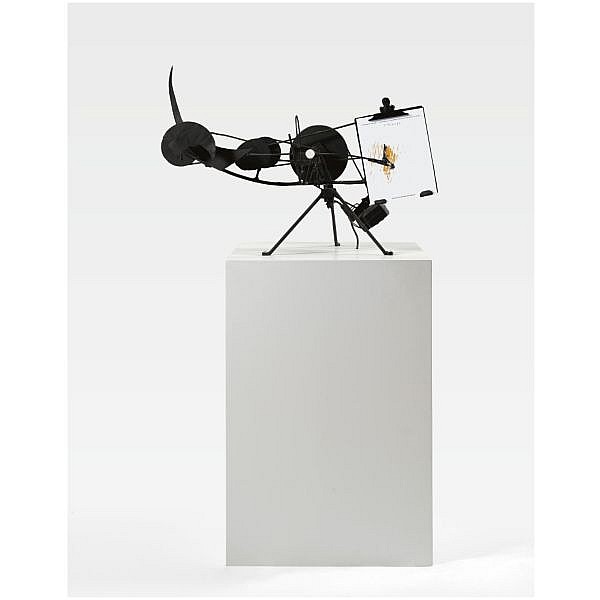 Galerie Denise René - Hans Mayer, Krefeld
Acquired directly from the above by the present owner in 1969

Executed in 1959.
PROPERTY FROM THE HELGA AND WALTHER LAUFFS COLLECTION
Executed in 1959, this is an extremely rare example from Jean Tinguely's iconic and breakthrough series of meta-matic drawing machines. Both witty and sincere, it embodies Tinguely's pioneering endeavour to dissect the nuts and bolts of artistic production. Following in the steps of Dada, Tinguely made a systematic attack on the traditional criteria of the art world - the unique work, the crafted product of the artist's talent, and its traditional presentation. Portable machines such as this one were designed to allow the spectator to produce abstract works of work automatically. With its drawing arms outstretched, Métamatic No. 7 plays out an impish imitation of the role of the artist. At the same time it is something of a caricature of the utilitarian, mechanical world, and demonstrates Tinguely's critical posture towards technological optimism. Funnily enough, the rather fragile-looking body continues to destabilise its mechanical status: its tense tendons, charming little feet, the cheeky flick of the tail, and delicately inter-connected wires make it utterly idiosyncratic. Appropriately, the machine's drawing action was more haphazard than logical, resulting in an unpredictable drawing. Perched on a pedestal by means of a thin steel tripod, Métamatic No. 7 stands as a masterpiece of irony. Other works from the small series are housed in the collections of the Musée National d'Art Moderne, Centre Georges Pompiou, Paris; the Moderna Museet, Stockholm; the Museum of Fine Arts, Houston and the Stedelijk Museum, Amsterdam. In a cunning defraction of artistic responsibility, Tinguely conceived of an artwork as a machine that could in turn produce its own artwork. Métamatic No. 7 represents a radical advance from Tinguely's early interest in the Surrealist practice of automatism, and his emphasis on the accidental and fascination with gesture confirms his alliance with Duchamp, whose 'roto-reliefs' set a decisive precedent. Movement was the central focus of Tinguely's work, however this piece represents a break from the Futurists' plain obsession with technologically-driven movement; Tinguely poses the question, movement to what end? By formalising the process of creation as a mechanical action, Tinguely also evinced a highly imaginative reaction against the dominant expressionist trends of the 1950s Action painting and Informal painting. His thought-provoking machines were such a new invention that, as Pontus Hulten describes, required a new terminology: 'The question as to what Tinguely's machines ought to be called had arisen with his first exhibition. None of the names that had been suggested -- 'automata', 'mechanical sculptures', 'mobiles' -- was really satisfactory; the last was too closely associated with Calder. My suggestion was 'meta-mechanical', by analogy with 'metaphysical', and on one of my daily visits to the Bibliothèque Nationale I was able to check in the Grand Dictionnaire Larousse that 'meta' can be used to mean 'with' and 'after' -- which seemed just right. Also the association of ideas with words like 'metaphor' and 'metamorphosis' seemed to me to be very appropriate.' (Pontus Hulten, Jean Tinguely: 'Meta', London, 1975, p. 16). The Méta-matics were first exhibited at the Galerie Iris Clert in Paris in July 1959 - a single room that was to emerge as an important hub for the Nouveau Réalistes (Tinguely had collaborated with Yves Klein on the installation Vitesse pure et stabilité monochrome the previous November). Arranged on plinths, the drawing machines were coin-operated by the exhibition-going public using special coins that Tinguely fabricated for the occasion. The exhibition was one of several ways in which Tinguely pursued his idea of the 'pure present' in 1959. In March he scattered 1500 copies of the manifesto Für Statik from an airplane over Düsseldorf. In November he arranged the Cyclo-Matic Evening at the Institute of Contemporary Arts, London, where two recordings were superimposed on top of one another at different speeds while a woman walked through the audience handing out drawings from a manual Méta-matic and two cyclists raced against each other on a Super-cyclo-Méta-matic. Meanwhile in the first Paris Biennale he installed the enormous Méta-matic 17 on the forecourt of the Musée d'Art Moderne de la Ville de Paris - a car-like machine made out of scrap materials that created 40,000 drawings by means of a balloon filled with exhaust gas. Métamatic No. 7 was therefore at the nub of an incredible year: somewhere between happenings and kinetic art, it was prophetic of concerns to be taken up by Nouveau Réalisme in the years ahead. Tinguely's drawing machine provides an acute insight into the artist's proclamation that 'everything moves' and 'there is no immobility', as expounded in Für Statik, his tract of 14 March 1959. His unique way of dealing with the problem of art-making in an age riddled with mechanical reproduction was to turn attention to the mechanical instrument of reproduction itself. Entirely coated in black paint, this quizzical, humorous object stands as a kind of drawing, frozen in space and yet retaining the potential to move. It undermines the very concept of the hand-made art object, and instead, on delicate metal legs, champions the qualities of spectacle, possibility and participation. Tinguely's examination of the relations between the artist, the artwork and the audience can be seen at its keenest in the poetic concept of the drawing machine, among which Métamatic No. 7 is a resounding exclamation mark.