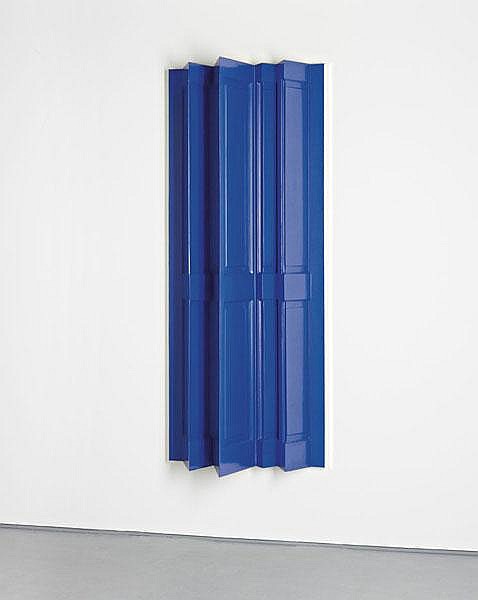 Jim Lambie’s Doors sculptures are deservedly the best-known of all his works. Their references are as rich as their colours are striking. The found objects are transformed to play on the tensions inherent in dualities such as art and craft, and decoration and function, and, as with most of Lambie’s work, these are explored with reference to music. The title of the present lot, Night Divides the Day, is taken from the song lyrics of ‘Break on Through (To the Other Side)’ by the psychedelic rock band The Doors. Even though the music is not part of the work, its overt reference to a well-known song by a famous band has a significant impact upon the viewer. As the artist has stated in an interview in 2005: “I want to suggest the way a space changes when you put a record on. I want to set up this intense psychological space.” ( www.telegraph.co.uk/culture/art/3647142/In-the-studio-Jim-Lambie.html).
Lambie’s work presents a contorted, bright blue monochrome door, which is hung on to the wall like a painting. The volume of the work against the flat wall underlines its spatial aspects and sculptural qualities, which extend into the space it occupies. While this can be seen as a take on minimalist sculpture, his work references other key 20th-century art movements. The abstraction is here not lyrical, but has a Pop art dimension in its use of an everyday object and bright primary monochrome colour. Cut up and stripped of its utilitarian purpose, Lambie’s door becomes a deconstruction of a door an enigmatic postmodern icon for our times.
“Dismembered doors, cut up and folded in on themselves also bear mirrored surfaces in a crude visual pun, in part after William Blake (‘If the doors of perception were cleansed everything would appear to man as it is, infinite’, William Blake, The Marriage of Heaven and Hell, 1793), albeit via Aldous Huxley’s Doors of Perception (1954), in turn via Jim Morrison’s The Doors – and more particularly, via a much replayed performance of the band’s ‘Light My Fire’ on the Ed Sullivan Show, when the band performed on a studio set dressed with hanging household doors.” (Rob Tufnell, ‘Psychedelic Soul’, in Jim Lambie: Voidoid, Glasgow, pp. 49–51)