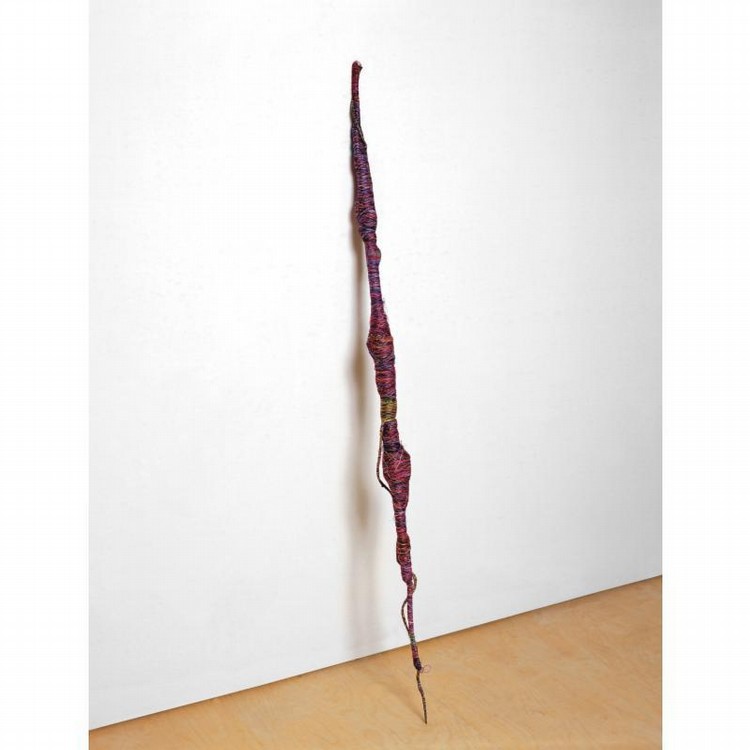 Donated by the artist, courtesy of Sadie Coles HQ and The Modern Institute/Toby Webster Ltd

Plastic bags, buttons, discarded gloves, belts, magazine cut-outs, threads of wool -- Jim Lambie draws his materials from the attic, the market stall or the jumble sale; from the clutter and visual noise of our daily lives. He arranges these in simple configurations -- a line, a circle -- or manipulates them through simple gestures such as cutting, tying or sticking. This economy of means is in inverse proportion to the sheer punk splendour of his work, which combines colour and line to inject a psychedelic rush of energy into the prosaic and the everyday.

Lambie's works often start from, or at least contain, a hard edge that is then broken down and opened out. The outer perimeter of a vinyl record might be pulled inwards by the coloured threads with which it has been covered, rainbow rays that simultaneously draw the eye into the centre and vibrate with the energy of an explosion caught mid air. Others are slower in rhythm: seven punctured plastic bags of different colours hang low on hooks, eking coloured paint that streaks the walls before congealing into formless pools of colour on the gallery's floor. With each of Lambie's works, a physical object sets the parameters for his intervention, and is then abstracted to a point where it hovers between sculpture and image.

Perhaps his best-known work is Lambie's Zobop, an ongoing series of patterned floors. These are made with strips of differently coloured adhesive vinyl, applied to follow the contours of the walls in ever-decreasing concentric configurations that eventually cover the entire floor. To a certain extent, Zobop explains the architecture of the space by mapping out its shape, while incorporating itself by fusing with, rather than resting on, the floor. Yet the overall effect is to prize open the solidity of bricks and mortar, which the artist renders almost illegible through a syncopated, vortex-like configuration of colour and line. This disruptive force redefines rather than illustrates the space, transforming it into a psychologically charged environment that speaks of an altogether different use.

While Lambie's work spans a number of artistic references -- drip painting, Fluxus, Minimalism, Op Art to name but a few -- his language is more closely aligned with the mental dreamscapes of Surrealism, marked out with the attendant props of a pop cultural iconography that shapes our waking world. Music appears especially important; indeed Zobop is reminiscent of the multi-coloured dance floors of the 1970s and 80s. Other works may consist of record decks covered in coloured glitter, record covers cut and opened into Rorschach images, or speakers covered in mirrors and sparkling, tight fitting tank-tops. Objects such as these have been manipulated in a way that deprives them of their functionality, conjuring up and rendering manifest the experiences and emotions that music can generate in its ability to transform the mundane.

Psychedelicsoulstick, created by the artist especially for this auction, is part of an ongoing series, which began in 1998. It consists of a bamboo stick that has been tied up with different coloured thread, while mundane, discarded articles such as empy cigarette packets, an old watch or some guitar lead are woven into it like objects in a time capsule. The crafted quality of the work is emphasised in the materials and the process -- fingers that might have plucked on guitars strings or sown garments for the body have created here an object that vibrates like a shimmering rainbow, carrying within its genetic make-up the promise of music to come. A second line snakes it way around the main stick, this one entirely made of tightly wound material. The two elements come together in several places with bulbous forms that resemble a cocoon or chrysalis, here too suggesting the possibility of a transformation that stems from deep within the work.

Psychedelicsoulstick recalls André Cadere's Barres de Bois Ronde of the 1970s, which the artist would carry round the city, give to friends or casually prop up against walls, as though not quite belonging, in gallery exhibitions. Cadere hoped that each Barre would offer a starting point for conversation, and would chose the colours of each work according to a system which, however, would also carry within it one mistake. Lambie's soul stick, by contrast, is all mistake; a criss-crossing vortex of interconnecting line and colour that follows no predetermined order but revels instead in chance and coincidence. Like a shamanistic, ritual object, it possesses an extraordinary energy that radiates out and fills a room, amplifying the abstract, in-between and irrational spaces that are Lambie's terrain. Nominated for the Turner Prize in 2005, Jim Lambie has exhibited around the world with recent shows at the 54th Carnegie International in Pittsburgh (2005), the Lyons Biennale (2005) and the Hirshhorn Museum in Washington, DC, in 2006. He was one of a group of artists representing Scotland at the Venice Biennale in 2003. AT