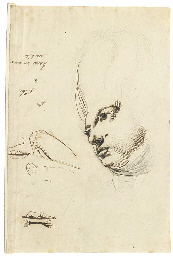 The head of Martha Hess, with studies of fingers and mouths ( recto ); Two compositional studies for classical scenes ( verso ) inscribed 'She knows no more about it' graphite, pen and brown ink, countermark M 111/4 x 7 3/8 in. (284 x 186 mm.) PROVENANCE Harriet Jane Moore (1801-1884), and by descent as part of an album of drawings by Fssli; Christie's, London, 14 April 1992, lot 11. NOTES This portrait of Martha Hess can be compared to three portraits from Fssli's Roman sketchbook now in the Kunsthaus, Zurich, G. Schiff, Johan Heinrich Fssli 1741-1825, Zurich, 1973, nos. 573 and 575-6. Fssli drew all four portraits during his six-month stay in Zurich in 1778, his only return to his homeland after his self-imposed exile in 1762. During this period he was involved in a number of artistic projects, but seems to have been more closely involved in a number of intense love affairs and near-affairs, notably with Martha Hess' married sister Magdalena Schweizer-Hess. Both sisters seem to have been of an unusually emotional nature: Magdalena claimed to be able to divine earthquakes and underground springs, and could be induced into a hypnotic trance while having her hair brushed, while Martha was prone to falling into a state of religious ecstasy. The effect that the excitable Fssli had on the sisters, and they on him, seems to have been profound. Martha Hess died of consumption shortly after Fssli's departure in December 1779, which has led to immaginative readings of the inscription and pictogram on the present lot. The present drawing was part of an album of drawings gathered by Harriet Jane Moore (1801-1884), daughter of Fssli's close friend James Carrick-Moore and one of the elderly artist's favourites when a young girl. Fssli's letters are scattered with references to Harriet and her sisters, M. Butlin, Introduction to Christie's sale catalogue, London, 14 March 1992. Fssli's connection with the family seems to date from his friendship with Dr John Moore, Harriet's grandfather, in Rome in the 1770s. Fssli seems to have been closest to his second son, Harriet's father James, with whom he travelled to Paris in 1802. He gave a number of drawings to Harriet during his life, and she added to this group by purchases in the saleroom and from acquaintances of the artist. The drawings were mounted in an album after 1837, and on Harriet's death in 1884 passed to a distant realtive by whose descendants it was consigned for sale in 1992.