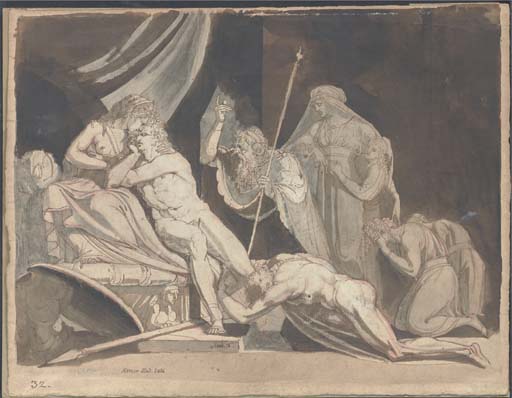 THE ESTATE OF DR. BERNARD BRESLAUER

The present drawing is one of six versions of the composition that Füssli executed in Rome between 1771 and 1776. The earliest composition, in the Kunsthaus, Zürich, dates from the year after Füssli's arrival in Rome. Another version, dedicated to the Swedish sculptor Johan Tobias Sergel (1740-1814), dating from 1776, is in the Nationalmuseum, Stockholm. Tracings of these two drawings are in Füssli's Roman sketchbook in the British Museum. The sixth version is in the Graphische Sammlung, Zürich (G.Schiff, op. cit., nos. 377, 380, 378, 381, 382).
The most developed versions are the present one and the one in Stockholm, both dated 1776. In these Füssli accentuated the contrasts between light and shade by adding a dark wash in the background. The main difference between these two drawings lies in the treatment of the priest: in the Stockholm drawing, as in the other versions, the priest has an entreating pose, whereas in the present composition, his look is more threatening and his hand points in the same direction as his sceptre.
Füssli worked in Rome for eight years from 1770. There he joined the group of English artists such as Alexander Runciman, John Brown, Thomas Banks and George Romney, and the Swedish sculptor Johan Tobias Sergel to whom the version in Stockholm was dedicated. By 1773 Füssli was one of the leading figures of that group and, according to Thomas Banks 'among the Students of Painting, Fuseli cuts the greatest figure', (letter to Nathaniel Smith, 31 July 1773, in C.F. Bell, Annals of Thomas Banks, Cambridge, 1938, p. 16). When Füssli left Rome in 1778 he gave Sergel a group of thirty sheets, among which was the other version of Meleager.
Upon his return in England in 1778, Füssli renewed contact with his former patrons, William Roscoe and Thomas Coutts. The latter, one of the richest men of his time and founder of Coutts Bank, had influenced Füssli's decision to go to Rome. Coutts remained a close friend and active supporter of the artist until his death in 1822. Füssli was also a friend of the banker's daughters Susan (1771-1837) and Sophia. Susan, who later became Countess of Guilford, owned one of the largest collections of Füssli's work. He often visited her in her house on Putney Hill and played with her two daughters Susan and Georgina. It was at their house that Füssli died in 1825. The Countess of Guilford and Sir Thomas Lawrence bought no less than 804 drawings by Füssli directly from the estate of the artist. Two years later at the sale of the artist's studio organized at Christie's, 28 May 1827,Lawrence bought a fifth of the lots. Later on, much of these reappeared at the sale of Lawrence's collection and it was again the Countess who purchased most. Her own collection, including the present drawing, was bequeathed to her eldest daughter, Susan, Lady North, who died in 1884.
The present drawing illustrates verses from Homer's Iliad in which Achilles is told the story of Meleager in the hope that it will persuade him to return to the battlefield. Oeneus, Meleager's father, King of the Aetolians, had incurred Artemis' wrath. The goddess had sent the Calydonian boar to lay waste the land. At a memorable hunt in which all the local princes participated, Meleager killed the beast which Atalanta, a young princess, had first wounded. The hero in gratitude for her help had presented her with the trophy of the hunt, the boar's skin. This had enraged the other princes and especially Meleager's uncles, the brothers of his mother. A fight ensued during which Meleager killed his uncles. His mother, as a result, cursed him. Distraught, Meleager withdrew from action depriving his city, Calydon, of an essential force against the Curetes, who, guided by Artemis, had besieged the Aetolians' capital. At this key moment the elders of the city came to Meleager to plead for his intervention. In the episode depicted Meleager, refusing to leave his wife, Cleopatra, is stigmatized by the High Priest, Meleager's sisters and the elders. Cleopatra eventually pleads herself in favor of the Aetolians. We are grateful to Professor D.H. Weinglass for his help in writing this entry: he will publish the drawing in his forthcoming translated, revised and updated English edition of Gert Schiff's catalogue raisonné of Füssli's work.