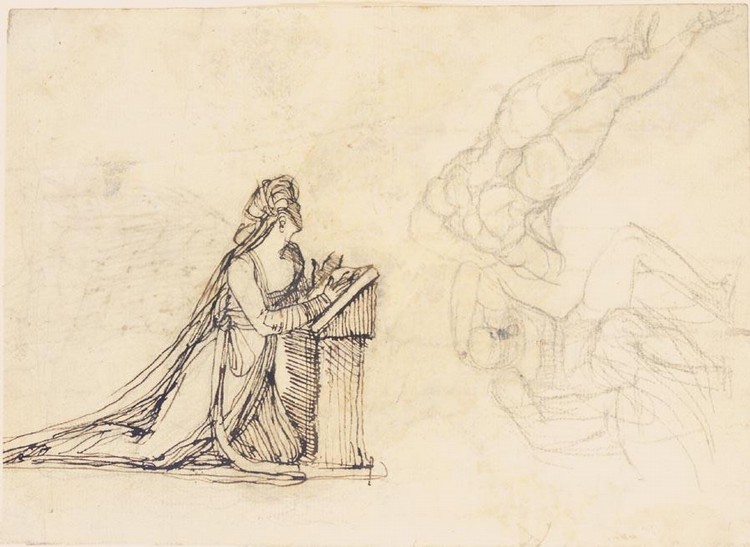 A LADY KNEELING AT A PRIE DIEU AND STUDIES OF TWO NUDES (RECTO); A STRIDING NUDE AND LOVERS EMBRACING (CROSSED OUT) ( VERSO)

A LADY KNEELING AT A PRIE DIEU AND STUDIES OF TWO NUDES (RECTO); A STRIDING NUDE AND LOVERS EMBRACING (CROSSED OUT) (VERSO)

The subject of the present drawing by Fuseli appears to be the Annunciation. The female figure is most likely the Madonna and it is possible that the nude figures are studies for angels.

There is a comic allusion on the verso of the drawing to Sir Joshua Reynolds, who had encouraged Fuseli to become a professional artist and who was President of the Royal Academy until his death in 1792. The inscription also includes the name, written in the same formal hand, of William Hunter. It is likely that this is William Hunter the anatomist (1718-1783), a friend of George Stubbs, A.R.A., and a Fellow of the Society of Antiquaries. Hunter formed a collection of anatomical and pathological material and also of coins, medals, manuscripts and books that formed the basis of the Hunterian Museum. John Hunter (1728-1893), the anatomist and surgeon, whose collection is now at the Royal College of Surgeons, was his younger brother.

The present drawing was once part of an album belonging to Harriet Jane Moore. She was a daughter of James Moore (later, Carrick-Moore) and the granddaughter of Dr John Moore, M.D. (1729-1802), family physician to William Lock of Norbury. Fuseli may well have met Moore at one of Lock's family gatherings or perhaps the pair met earlier during Fuseli's Roman years, when Moore was also in Italy with the Duke of Hamilton.

Dr Moore's son, James (1762-1860), became a great friend of Fuseli's and they corresponded regularly. James also owned a number of Fuseli's works. It was his daughter, Harriet Jane (1801-1884), whose name was inscribed inside the cover of the album in which this drawing was once mounted.

We are grateful to Professor David Weinglass for his assistance in cataloguing this lot.