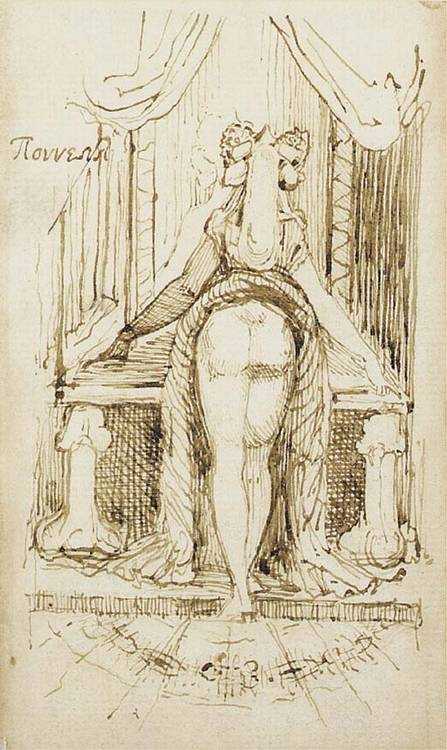 Callipyga: Mrs Fuseli with her skirts lifted to her waist standing before a dressing table with phallic supports
inscribed in Greek (upper left)
brown ink
6 1/4 x 3 3/4 in. (15.9 x 9.5 cm.)

Fuseli's contemporaries recognised his prediliction for the erotic back view in his drawings of women as one of his stylistic trademarks. (The Greek word 'callipyga' means 'beautiful buttocks'). Fellow artists like Rowlandson and Turner deliberately included such quotations in their own work. The present drawing previously assigned to '1810-1820' is in fact datable to the 1790s. It has been imaginatively elaborated from the artist's compositionally related but non-phallic A Woman Standing at a Dressing Table (G. Schiff, op. cit. 1973, no. 1069, 1790-1792; National Gallery, Ottowa) from the same period, showing her garbed in a simple dress. Both drawings clearly display, however, Fuseli's customary fetichistic preoccupation with fantastic and extravagant coiffures, frequently with obvious phallocentric elements. Two other strongly phallic drawings executed at about the same time as the Callipyga are also misdated to post 1810 (G. Schiff, op. cit. 1973, nos. 1616-1617). A further important common element of this group is the identity of the woman depicted, namely Fuseli's beautiful and fashion-smitten wife Sophia, over two decades younger than he. Her features, her remarkable hairdos, and her 'exquisite symmetry of form, [characterised by] all the fulness and perfection of the antique' (Mary Balmanno, op. cit., p. 200), are the centre-piece of that remarkable gallery of over 150 fantasised 'portraits' of her (not all of them flattering) created by Fuseli during the 1790s. These often merge into his erotic oeuvre, with its frequent 'Sado-Mannerist' representations (the phrase was coined by Jeffrey Daniels) drawn from history, literature and mythology, of defenceless men held in thrall by cruel tormentresses (e.g. Adam and Eve, Samson and Delilah, Gunther and Brunhild). Fuseli's Greek inscription, with its double meaning, 'I suffer pain' and 'I inflict pain' is an apt allusion to this imaginary world ruled over by femme fatales.

We are grateful to Professor David Weinglass for his help in preparing this catalogue entry.

Christie's generally offer property consigned by others for sale at public auction. From time to time, lots are offered which Christie's International Plc or one of its subsidiary companies owns in whole or in part. Such a lot is offered subject to a reserve, unless otherwise stated. This is such a lot.
No VAT will be charged on the hammer price, but VAT at 17.5% will be added to the buyer's premium which is invoiced on a VAT inclusive basis