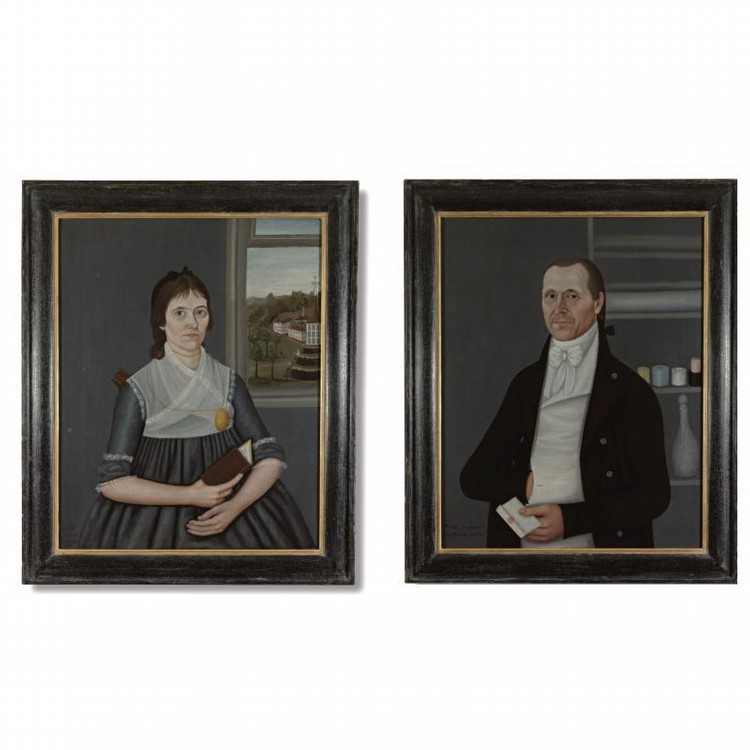 The Portrait of Elizabeth Stone Coffin is signed and dated: Ae 39 June 10, 1801 J. Brewster Pinxt
Elizabeth Stone Coffin is shown half-length, seated with the carved ear of a Chippendale chair visible over her right shoulder; depicted in a characteristic three-quarter face pose; wears a black ribbon in her hair, a transparent lace fichu over a blue-green silk dress edged with lace; her necklace of gold beads complements a gold locket or miniature secured over her heart; holds an open, leather-bound volume and the deep folds of her dress flow downwards beneath her arms; seated before a window opening on a townscape with various buildings and a terraced steeple or architectural folly along with a man and woman walking in the landscape; posed against a soft grey colored ground.

The Portrait of Major Daniel Coffin is signed and dated: Ae 49 June 13, 1801 J. Brewster Pinxt
Major Daniel Coffin is shown half-length wearing an aubergine colored jacket with pewter buttons, white waistcoat and stock; rendered in a three-quarter facial pose, hair tied back with a ribbon; stands in front of a highly stylized, abstract set of shelves on which are displayed bolts of material, spools of thread and a decanter, all painted against a gray ground; holds a letter with a red wax seal in his left hand; his right hand is in his waistcoat. On the top stretcher, verso, is written the name "Maj David Coffin" in chalk.

See Jeanne-Marie Zebrowski's "Just Plain Folk" in Maine Antique Digest, January 1981, p. 22A. This pair of portraits is described as "tops in Brewster so far." The article explains Mary Allis' purchase of the portraits at auction at Butterfield and Butterfield in San Francisco for $121,000 in 1981 only to find a dilemma - seven private collectors and two dealers wanted to buy the portraits from her. She subsequently held a private auction for the paintings "in which bids were opened in the presence of a lawyer." Stephen Score, dealer in Essex, Massachusetts, subsequently confirmed that he purchased the pair "at an undisclosed price in excess of $200,000." Nina Fletcher Little was one of the underbidders.

Score sold the paintings to Eddy Nicholson, the influential collector of Americana in the 1980s. Early in 1992, Marguerite Riordan, acting as agent for the Laracys, bought the Brewster portraits from Eddy Nicholson who was in the process of selling his entire collection. The Laracys laughingly recall, "We never did meet Eddy Nicholson, but I can tell you it took two years to agree on a price with him."

John Brewster, Jr. had a long and successful portrait painting career despite being a deaf-mute from birth. He was born in Hampton, Connecticut to Dr. John and Mary Durkee Brewster, who encouraged him at a young age to cope with his disability by learning to read and write. He displayed a talent for painting, which was fostered by studying with an established portrait painter, the Reverend Joseph Steward (1753-1822) and began painting likenesses in the 1790s. By 1796 he had moved to Buxton, Maine, to live with his brother Royal Brewster between periods of itinerancy. He traveled widely in Connecticut, Maine, Massachusetts, and eastern New York State in search of portrait commissions. In 1817 Brewster enrolled in the Connecticut Asylum for the Education and Instruction of Deaf and Dumb Persons in Hartford, learning new methods of non-verbal communication. He returned to Maine in 1820 and resumed his career as a portraitist. Brewster's extant portraits show his ability to produce delicate and sensitive likenesses in full-size or miniature, and in oil on canvas or ivory. In 1854 Brewster died at age eighty-eight.υ1

Although Brewster displayed an extraordinary ability to live and work in the hearing world, he often depended upon family ties to further his portrait career. The portraits of Major David coffin and Elizabeth Stone Coffin are prime examples of the importance of family connections. Major Coffin was a nephew of the eminent Harvard minister Paul Coffin, whose daughter Dorcas married Brewster's brother Royal in 1795. Pastor Coffin was originally from Newbury, Massachusetts.υ2

These likenesses are the earliest documented portraits of Brewster's extended 1801 sojourn in Newburyport, which suggests that the Coffins played a role in bringing the artist to the town. Brewster's nine documented 1801 Newburyport portraits include: this pair, executed in June; portraits of Captain and Mrs. William Wise, painted in August; and the five well-known portraits of the James Prince family painted in November.υ3 Brewster placed advertisements in the Newburyport Herald as late as January 22, 1802.

David Coffin was born in Newbury in 1763, the son of Major David Coffin (b. 1733), who was lost at sea in the year after his namesake was born. The sitter's older brother, Nathaniel (b. 1761) was lost at sea in 1781. David married Elizabeth Stone in Newburyport (which separated from Newbury in 1764) in 1786, and between that time and 1805 the couple had 11 children. Their eighth child, Ebenezer Stone coffin, was born in October 1801, indicating that Elizabeth Stone Coffin was several months pregnant when she sat for this portrait.υ4 David Coffin must have been involved in shipbuilding, a major industry in Newburyport, as he filed a claim in 1798 for $7800 for the loss of a schooner, the "Betsy and Lucy," which was confiscated by the French in their war with England.υ5

Brewster's portraits from the turn of the 19υth century are some of his best, and this pair is executed with the same penetrating characterizations, subtly muted palette, and economy of detail as his other mature paintings of the Mygatt, Cutts, and Prince families.υ6 Of particular note is the background to Elizabeth's portrait. This cluster of buildings has no known relation to the architecture of Newburyport, and seems to arise out of the artist's imagination. Brewster painted architectural detail in other portraits, such as his likeness of Lucy (Knapp) Mygatt and son George. Early in his career he added this same type of detail to the background of his 1795 likeness of his parents John and Ruth Avery Brewsterυ7 but then painted it out in favor of a landscape view. In Elizabeth's portrait, however, Brewster creates a miniature city, complete with an unusual round structure on a three-level terrace.

υ4For information on the Coffin genealogy, see Vital Records of Newbury, Essex, Massachusetts to the Year 1849. Salem, Mass.: Essex Institute, 1911 and Research Notes of Mary Adams Rolfe Regarding Tristram Coffin and Some of His Descendants, manuscript in the collection of the Historical Society of Old Newbury. Curiously, the known ages of the sitters do not match the inscriptions on the portraits; David Coffin would have been 37 when this likeness was painted, and Elizabeth Stone Coffin would have been 34. The author is grateful to Jay Anderson, Curator, Historical Society of Old Newbury, for information on the sitters.

υ6For a discussion of Brewster's mature style, see Paul S. D'Ambrosio, "Two Masterworks by John Brewster, Jr.," in Jane Katcher, David A. Schorsch, and Ruth Wolfe, eds., Expressions of Innocence and Eloquence: Selections from the Jane Katcher Collection of Americana, (Seattle: Marquand Books in association with Yale University Press, 2006): 56-65. The portraits of Comfort Starr Mygatt and daughter Lucy (1799, private collection) and Lucy (Knapp) Mygatt and son George (1799, Palmer Museum of Art, The Pennsylvania State University) are illustrated in Lane as plates 6 and 7. The portraits of Colonel and Mrs. Thomas Cutts (1796-1801, Saco Museum) are illustrated in Lane as plates 4a and 4b.

υ7The portrait of Dr. John and Mrs. (Ruth Avery) Brewster is in the collection of Old Sturbridge Village and is illustrated in Lane as plate 3. The overpainted buildings are faintly visible in the background at the center of the painting.

Distinguished American Furniture and Folk Art: The Collection of Susan and Mark Laracy