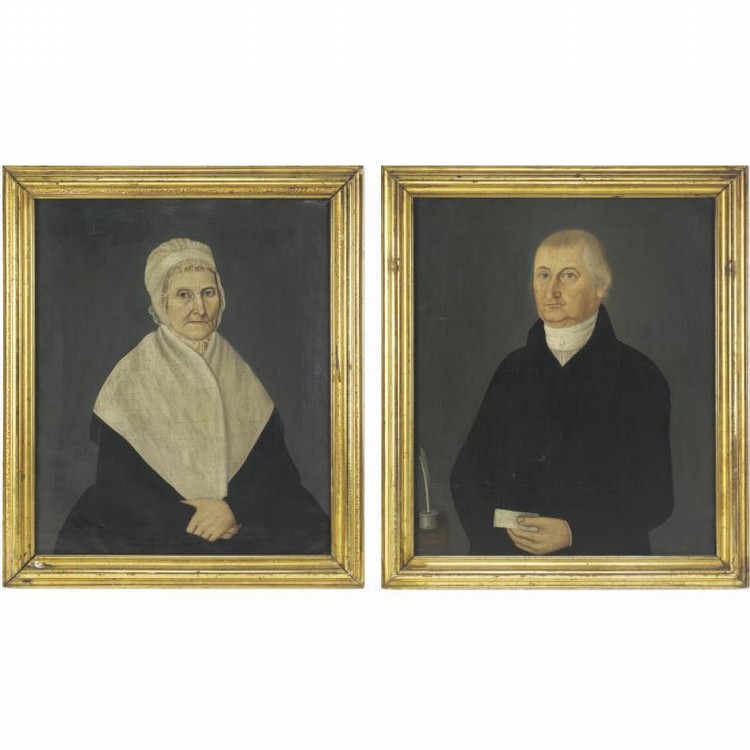 A DISTINGUISHED GENTLEMAN WEARING A BLACK COAT AND VEST HOLDING A FOLDED LETTER AND A WOMAN WEARING A LACE-TRIMMED WHITE CAP AND SHAWL: A PAIR OF PORTRAITS OF ELI MYGATT AND LUCY KNAPP MYGATT OF DANBURY, CONNECTICUT

Eli Mygatt (born January 25, 1742 and died October 1807) and Mary Boughton Mygatt (born 1744 and died May 29, 1831), were married on March 20, 1784. Eli had six living children at the time. Mary, aged forty at the time of her marriage, would bear three more children over the ensuing five years. Eli Mygatt was a Colonel from Connecticut during the Revolutionary War, and shared in the defense of Danbury, Connecticut, when it was burned by the British on April 27, 1777. He was a prominent merchant in Danbury, a purveyor of dry goods, lumber, groceries, drugs and also a partner in a silver and gold business. Eli represented Danbury in the Connecticut General Assembly at intervals for 23 years. He died suddenly in New Haven in October 1807 during the fall session of the Assembly. President Timothy Dwight of Yale University preached the funeral sermon before the burial in New Haven. In 1988, Sotheby's sold the Brewster portrait of Eli's son Comfort Starr Mygatt (by his first wife, Abigail Starr) and his granddaughter Lucy, daughter of Comfort. If this pair of portraits were painted in the same year, Eli would have been 57 and Mary 55 years old.

In 1983 with the publication in The Clarion of information about Comfort Starr Mygatt of Danbury, Connecticut, and his ledger entry for "John Brewster, Portrait Painter," a search began for the Mygatt portraits. The amount of 16 pounds, 10 shillings, was charged Mygatt "By Portrait Painting as the agreement," suggesting that several portraits were included in the commission. The discovery of these two portraits and presumably last pair of portraits, indicate that this was a highly important commission for the young artist.

John Brewster, Jr.'s characteristic penciled inscriptions on the top stretcher of his paintings has led to the identification of more than sixty of his portraits. Having exhibited an early "Genius for Painting," his first instructor in Hamptons is said to have been the painter Joseph Steward. He painted in the early 1790s in Connecticut, but soon thereafter followed his younger brother to Maine and spent parts of 1796 and 1797 painting in Portland. He returned to Connecticut and advertised his profession in Hampton and Chelsea in 1797 and 1798. He made his permanent home in Buxton, Maine, and the bulk of his mature work is to be found in that state. In 1817 the first permanent American school for the deaf and dumb was founded in Hartford, Connecticut, and at the age fifty-one years Brewster registered and attended the institution for three years, before returning to Maine in 1820 to continue his professional career. He died in Buxton on August 13, 1854, at the advanced age of eighty-eight.