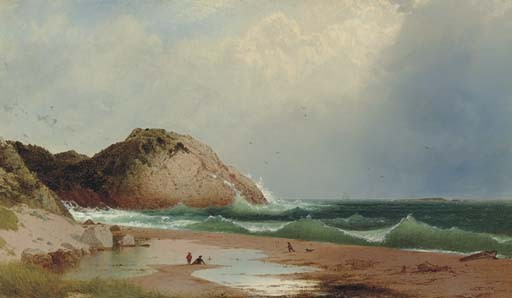 Berry-Hill Galleries, New York.
Acquired by the present owner from the above.

John F. Kensett sought and achieved considerable acclaim for his depictions of the national landscape. In 1847, following his seven years of study and travel abroad, Kensett returned to America and immediately embarked on a career grounded in the close study of nature. Writing two decades later, the nineteenth-century historian Henry Tuckerman made note of his early success: "He commenced a series of careful studies of our mountain, lake, forest, and coast landscape; and in his delineation of rocks, trees, and water, attained a wide and permanent celebrity. Year after year he studiously explored and faithfully painted the mountains of New England and New York, the lakes and rivers of the Middle States, and the Eastern sea-coast, selecting with much judgment or combining with rare tact the most characteristic features and phases of each. Many of these landscapes, patiently elaborated as they were from studies made from nature, at once gained the artist numerous admirers and liberal patrons." (Book of the Artists, American Artist Life, New York, 1967 ed., p. 511)

"In the mid-1850s, Kensett began to turn away from what might be called an early Hudson River School pictorial mode--with contorted tree trunks, zigzagging recession into deep space, and an emphasis on wilderness subjects--toward a quieter, more atmospheric and contemplative mode. After making this change, he was consistently praised for his lyricism, his fidelity to nature, and his unpretentiousness. An early assessment of this mature and distinctive style appeared in The Crayon, in a review of the National Academy of Design Exhibition of 1858: 'Kensett's pictures are, to our mind, remarkable in many points, --for refinement of taste, treatment of distances, rendering of atmospheric effect, and a happy expression of the broad light of day and of a specific time of day. His perception of the poetry and harmony of nature in these respects, is remarkably subtle and delicate. There is no ostentation in his pictures, no insincerity or negligence, no affectation of color, or aim to force striking contrasts. So far as we can see in his works, he paints faithfully whatever excites his sympathy.'" (O.R. Roque in J.P. Driscoll and J.K. Howatt, John Frederick Kensett: An American Master, exhibition catalogue, Worcester, Massachusetts, 1985, p. 153)
Kensett turned his attention to coastal estuaries such as the Shrewsbury River in New Jersey, and to dramatic views of Newport Harbor, in Rhode Island. Beginning with his series of paintings in 1859 depicting Eagle Rock at Manchester, Massachusetts, Kensett embarked on a theme that captivated him for the remainder of his career, namely the depiction of coastal beaches and the sea. Of Eagle Rock, he produced at least three versions, including the present work and a larger example which is likewise dated 1859. Here Kensett includes the essential elements of the larger version, varying only their placement and emphasis in the composition. On an expansive beach, the artist depicts two boys with a toy sailboat which they have launched onto a tidal pool, while another child and dog run along the water's edge. Towering behind them are the crashing surf and the most prominent element of the composition, Eagle Rock. The contrast of the children and the wild scenery behind them appears to be Kensett's central theme. In addition to the painting's Luminist effects of light, it is Kensett's contrast of the awesome and the sublime, the rock and the wave, with the children at play which gives the painting its poignancy.

It is perhaps the artist's contemporary, Henry Tuckerman, who best summarizes Kensett's achievement with a poetic tribute in his Book of the Artists: "His best pictures exhibit a rare purity of feeling, an accuracy and delicacy, and especially a harmonious treatment, perfectly adapted to the subject. Here it may be an elm-tree, full of grace and beauty, crowning a scene of rural peace, which steals, like nature's own balm, upon the heart of the spectator...now it is the dark umbrage, and now the shelving glen; here a ridge of stone and there a stormy mountain-cloud, or exquisite beach with greenly-curving and snowy-fringed billows--and all seem so instinct[ive], both as to form and hue, tone and impression, with nature's truth, that they win and warm, calm or cheer, the heart of her votary, like the voice of one beloved, or the responsive glance of a kindred soul." (Book of the Artists, p. 511)