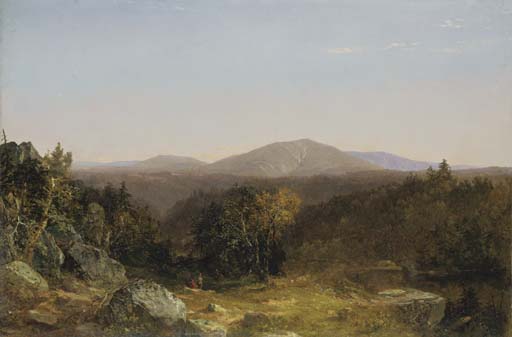 Property from the Descendants of Sophia M. Goodridge

Even at the outset of his career, John F. Kensett achieved considerable acclaim for his depictions of the American landscape. After seven years of training abroad, Kensett returned to America in 1847 and immediately embarked on a career grounded in the close study of nature. Writing in 1867, Henry Tuckerman made note of his early success, "He commenced a series of careful studies of our mountain, lake, forest, and coast landscape; and in his delineation of rocks, trees, and water, attained a wide and permanent celebrity. Year after year he studiously explored and faithfully painted the mountains of New England and New York, the lakes and rivers of the Middle States, and the Eastern sea-coast, selecting with much judgment or combining with rare tact the most characteristic features and phases of each. Many of these landscapes, patiently elaborated as they were from studies made from nature, at once gained the artist numerous admirers and liberal patrons." (Book of the Artists: American Artist Life, New York, reprinted 1967, p. 511)

Kensett's inspiration for the present painting, View of Mount Washington, was almost certainly his sketching trip of 1850 to the White Mountains. That summer, Kensett toured with his fellow artists Benjamin Champney and John Casilear. As noted by art historian John Driscoll, "Champney recalled that in the vicinity of Bridgeton and Fryberg, Maine, 'we caught our first view of the air-drawn lines of the Mount Washington Range.' On 8 July Kensett made his first known sketch of Mount Washington and began formulating his ideas for the most ambitious painting he had yet undertaken, a canvas of 40 by 60 inches that would embody his philosophical and artistic beliefs." (John Frederick Kensett, New York, 1985, p. 63) The painting was The White Mountains--From North Conway of 1851 (Wellesley College Museum, Wellesley, Massachusetts), a depiction of a settled, pastoral landscape. In it Kensett paints a broad valley with farms and in the middle distance, the village of North Conway. Rising toward a cloudless sky, Mount Washington dominates the horizon. Seeming to epitomize the idea of a bucolic landscape, the painting quickly became a sensation and was widely reproduced.

View of Mount Washington relates closely to several other works of the 1850s by Kensett which are likewise characterized by broad mountain vistas--often painted on a similarly large scale. Paintings such as Camel's Hump from the Western Shore of Lake Champlain (1852, High Museum of Art, Atlanta, Georgia), Conway Valley, New Hampshire (1854, Worcester Art Museum, Worcester, Massachusetts) and October Day in the White Mountains (1854, The Cleveland Museum of Art, Cleveland, Ohio) are each grand depictions of the American landscape from on high. In these and many other works of this period, the theme of settlement is not far removed, suggested by a home, a wagon, a boat or a distant steeple. Among Kensett's largest landscapes, View of Mount Washington is one of the few in which the wilderness is pristine. The work is also representative of Kensett's increasing interest in the effects of brilliant light, which impart a sense of serenity to his best work.

In the wildness of its landscape, Kensett's View of Mount Washington can be seen as a pendant composition to The White Mountains--From North Conway. Painting the same mountain range, the artist has chosen a similarly elevated vantage-point. The first hints of autumn color are just beginning to appear in two foreground trees. The landscape is untouched and its primitive beauty is reinforced by a subtle narrative in the middle ground where Kensett has placed a small gathering of Indians, hinting that the scene before us dates to a much earlier time, before the onset of settlement. By the time this work was painted, the wilderness had long receded westward. In View of Mount Washington, Kensett strives to recapture what was lost and to recreate an iconic landscape image emblematic of America.

These basic themes of the wild and settled landscape were also much remarked upon in Kensett's day. An anonymous reviewer praising Kensett's landscapes in the 1852 exhibition of the National Academy of Design captured the dichotomy of his work in the depiction of a landscape of national character: "American landscape must by its very nature be very different from that of any other country...the artist in [America] looks to the free, unbroken wilderness for the highest expression of the new world motive, and thence with some mingling of human sympathy to the clearing and the log-cabin; the strongest feeling of the American is to that which is new and fresh--to the freedom of the grand old forest--to the energy of the wild life. He may look with interest to the ruins of Italy, but with enthusiasm to the cabin of the pioneer; to that in which our country excels all others, the grandeur of its natural scenes--its boundless expanses and the magnitude of objective." (John Frederick Kensett, p. 67)

For Tuckerman, who recognized Kensett's devotion to European subjects as well as American ones, the artist's views of his native land were the consummate proof of his success. "The calm sweetness of Kensett's best efforts, the conscientiousness with which he preserves local diversities--the evenness of manner, the patience in detail, the harmonious tone--all are traceable to the artist's feeling and innate disposition, as well as to his skill. If we desired to carry abroad genuine memorials of native scenery--to keep alive its impression in a foreign land--we should select half-a-dozen of Kensett's landscapes." (Book of the Artists: American Artist Life, p. 514)

This painting will be included in the forthcoming John F. Kensett catalogue raisonné being prepared under the direction of Dr. John Driscoll.