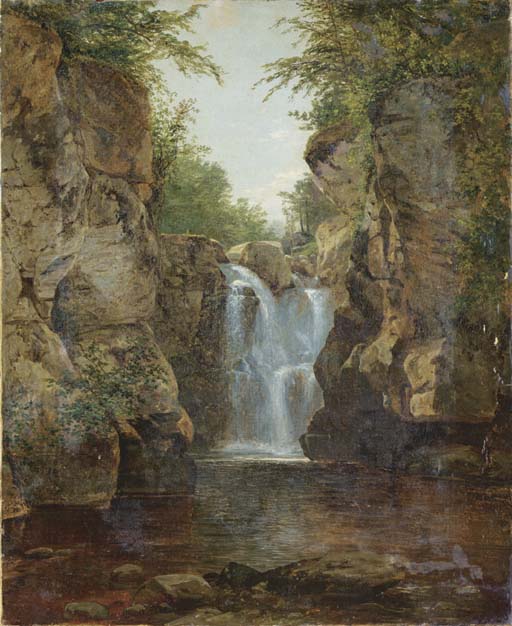 Photographs of Paintings by J.F. Kensett at The National Academy of Design in 1873, pl. 23, illustrated.

John Frederick Kensett's body of work during the 1850s reveals a mastery of capturing the American landscape, ranging from expansive sweeping views of the White Mountains to more intimate portrayals of woodland interiors. This decade "was a period of growth, experimentation, and change for Kensett, a prelude to the final years of his career in which he would define a personal and evocative style." (J.P. Driscoll, exhibition catalogue, "From Burin to Brush: The Development of a Painter," John Frederick Kensett: An American Master, New York, 1985, p. 63) The present painting, Bash Bish Falls, was executed during this significant period and demonstrates the fundamental contemplative relationship with nature that was central to Kensett's artistic triumphs.

The most influential member of the second generation of the Hudson River School, Kensett involoved his early career abroad in the 1840s. The young artist spent much of his time developing his own drawing skills on numerous sketching tours throughout the European countryside with close friend and fellow artist, John William Casilear. Upon his return home to New York in 1847, Kensett's work met with great acclaim and he actively exhibited at the National Academy. The encouragement and close company of other leading artists of the day, including Thomas Cole and Asher B. Durand, provided Kensett with a devoted source of inspiration to draw from and to discuss the prominent artistic theories of the day. These artists "were committed to the idea that the unspoiled landscape, if contemplated with sufficient devotion, had the power to convey religious, philosophical, didactic, and even therapeutic meaning." ("From Burin to Brush: The Development of a Painter," p. 62) Further underscoring this belief of the thorough study of landscape were the leading transcendentalists Ralph Waldo Emerson and Henry David Thoreau whose writings would have a profound impact on Kensett and his contemporaries.

Located in the Berkshires in Massachusetts, Bash Bish Falls were a popular destination for many artists during the middle of the nineteenth century. A writer in The Crayon described the site as "one of the wildest and most beautiful cascades in the country." Kensett was known to have painted Bash Bish Falls at least five times during the first half of the 1850s, including paintings that are presently in the collections of the National Academy of Design, New York, and The Butler Institute of American Art, Youngstown, Ohio. In both examples, Kensett has depicted a small foot bridge spanning the large boulders that distinguish this specific location, over a small cascading pool set amongst trees and rocks. In the present work, Kensett takes a more direct and closely inspected vantage point of the falls, forcing the viewer to closely regard the delicate details embedded in the scene. At the same time, and comparable to other works from this series, Kensett establishes a composition consisting of a series of horizontal bands that successfully lead the viewer deeper into space and nature's sublimity.

The palette and composition of Bash Bish Falls is clearly indebted to the influence of both Kensett's time abroad and his contemporaries. The delicate handling of paint and muted palette of browns and greens are not only reminiscent of Durand but also echo the Dutch landscapists of the seventeenth century with which Kensett was so impressed. Moreover, Durand's Study from Nature (circa 1855, The New York Historical Society) is a clear precedent for the "sympathetic evocation of nature in the combination of atmosphere, light, and color." ("From Burin to Brush: The Development of a Painter," p. 82) However, in his series of woodland interiors, Kensett lends his own innovative techniques of rendering form that results in an overall dramatic scene. "The light in these paintings has a chiaroscuro not seen in the panoramic scenes. Because of Kensett's proximity to the scene and the relatively shallow perspective, contrasts between light and dark passages are more intense. The depths of the ravine, where little or no light penetrates, are dark and quiet, while exposed areas--tree trunks, rocks, and water--are enlivened by flickering touches of white which intensify the immediacy of the bright daylight. Here Kensett's textural surfaces are more animated than those usually encountered in Durand's work. Kensett's color often tends to be more heavily tinted than his mentor's and the result is a more luminous and transparent palette." ("From Burin to Brush: The Development of a Painter," p. 83)

This painting will be included in the forthcoming John F. Kensett catalogue raisonné being prepared under the direction of Dr. John Driscoll.