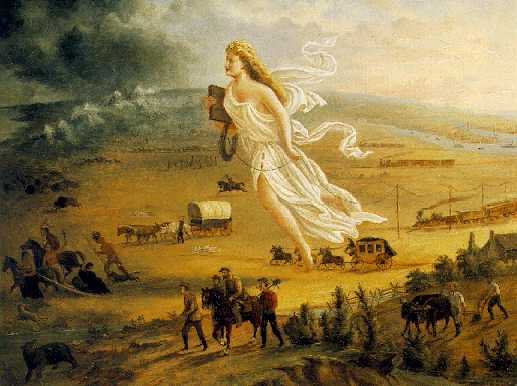 l.r. - - oil on canvas12 3/4 x 16 3/4 in. (32.5 x 40.6 cm.)PROVENANCEHarry T. Peters, Jr., Middleburg, VirginiaEXHIBITEDWashington, D.C., National Collection of Fine Arts, America as Art, April-Nov. 1976, pp. 145-146, illus. as Westward HoGrand Rapids, The Grand Rapids Art Museum, Themes in American Painting, Oct.-Nov. 1977, pp. 24-25, no. 7, illus.New York, The Brooklyn Museum, The Great East River Bridge 1883-1983, March-June, 1983, p. 11, illus.Washington, D.C. National Museum of American Art, The West as America: Reinterpreting Images of the Frontier, March-July, 1991, pp. 134-6, 354; p. 96, illus. of detail; p. 135, pl. 122, illus.LITERATUREG. Crofutt, Crofutt's New Overland Tourist and Pacific Coast Guide, Chicago, 1878, illus. of engraving J. V. Fifer, American Progress: The growth of the Transport, Tourist and Information Industries in the Nineteenth-Century West, Seen Through the Life and Times of George A. Crofutt, Pioneer and Publicist of the Transcontinental Age, Chester, Connecticut, 1988, dust jacket and frontispiece, illus.J. G. Sweeney, The Columbus of the Woods: Daniel Boone and the Typology of Manifest Destiny, St. Louis, 1992, p. 62, fig. 45, illus.This painting has been requested for reproduction in the following future publications:J. Prown, ed., Discovered Lands, Invented Places, New Haven, Fall, 1992J. Dilts, The Great Road: The Building of the Baltimore and Ohio, The Nation's First Railroad, 1828-1853, Stanford, Fall 1992Steeplechase Films, The Donner Party, documentary for PBS to be aired in Fall, 1992In 1872, publicist George Crofutt commissioned John Gast to paint this romanticized vision of westward, expansion which he described:[A] beautiful and charming female... floating westward through the air, bearing on her forehead the "Star of Empire". She has left the cities of the East far behind... and still her course is westward. In her right hand, she carries a book - - common school - - the emblem of education and the testimonial of our national enlightenment, while with the left hand she unfolds and stretches the slender wires of the telegraph, that are to flash intelligence thoughout the land... Fleeing from "Progress"... are the Indians, buffalo, wind horses, bears and other game, moving westward - - ever westward. The Indians... turn their despairing faces toward the setting sun, as they flee from the presence of the wondrous vision. The "Star" is too much for them.As Patricia Hills points out in her essay for The West as America, Crofutt's conception of the image draws on the old rhetoric of Manifest Destiny, a still persuasive harangue for publicists urging western travel." Crofutt made good commercial use of American Progress, publishing it first as a chromolithograph to promote his travel guides, and subsequently engraving it for use as the frontispiece for Crofutt's New Overland Tourist and Pacific Coast Guide, 1878-1879.The panorama depicts a chronological as well as geographic journey. The recently designed Brooklyn Bridge, which would not be completed until 1883, appears in the East in the light of the rising sun. The trans-continental railroad, completed in 1869, is shown in its infancy, nipping at the heels of the covered wagon pioneers and the Pony Express. The growth of the nation is synonymous with westward expansion, although, even in this optimistic image, it is not without a sense of loss, as the bones of the buffalo litter the plains, and the Native Americans are both literally and metaphorically pushed out of the picture by the onrushing wonders of civilization.Gast's only known painting, the importance of American Progress as an icon of the 19th century philosophy of Manifest Destiny is undeniable. This picture embodies the nation's image of itself as forward-looking and dynamic, creating progress through education, industry and science, where there was once only wilderness.