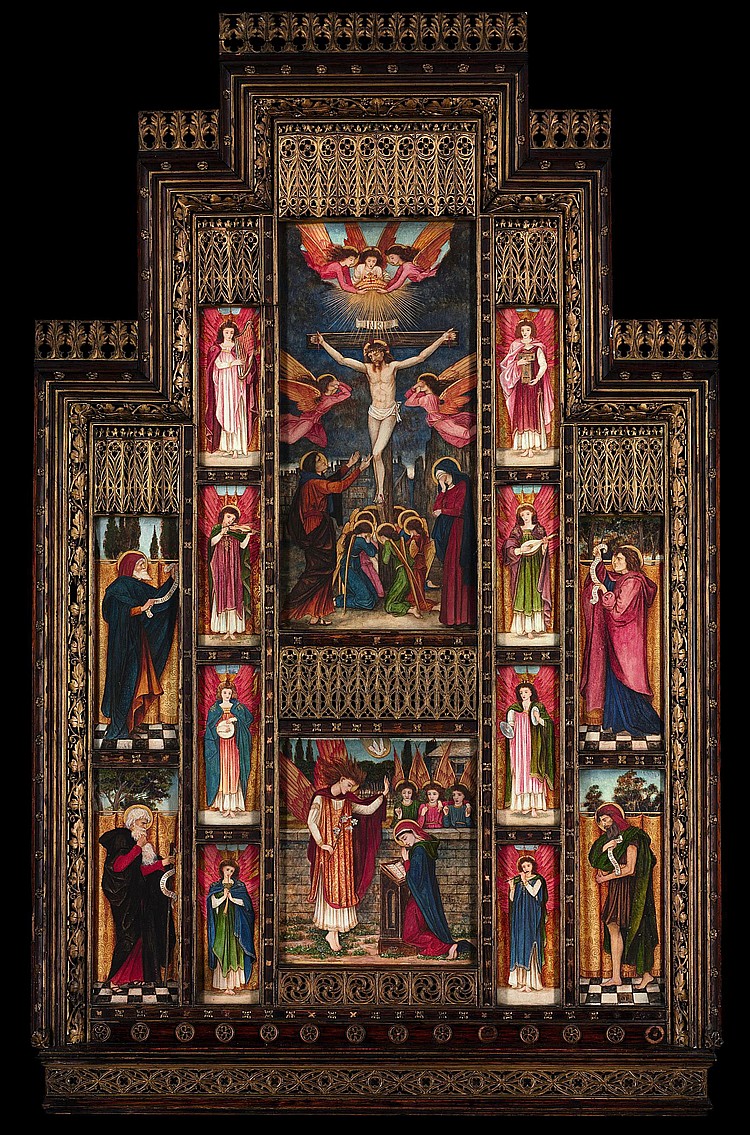 John Roddam Spencer Stanhope (1829-1908)
A Design for the Reredos at Holy Trinity, Florence including: The Crucifixion; The Annunciation; four Old Testament Prophets; and eight Angels
inscribed 'Design for the Reredos/at Holy Trinity-Florence/by/R. Spencer Stanhope' (on a label attached to the backboard) and further inscribed 'angels..?..to be red one' (on the reverse of the backboard)
pencil, pen and brown ink and watercolour heightened with touches of white and gold, on paper, fourteen watercolours in an elaborate gilt-mahogany Gothic Revival frame by Bertini of Florence
20½ x 10 in. (52 x 25.4 cm.); and smaller; the frame 54½ x 33 7/8 in. (138.5 x 85.9 cm.) overall
14 in one frame

London, Carfax Gallery, Pictures and drawings by the late R. Spencer Stanhope, 1909, no. 17.
Recently on loan to the Treasury at Guildford Cathedral.

Bequeathed by the artist to his stepdaughter, Mrs Mure.
Given by her in 1936 to Christ Church, Esher, Surrey, where it was displayed in the Lady Chapel.

To be offered on behalf of Esher Parochial Church Council

This is an elaborate study for a polyptych that Stanhope painted for Holy Trinity Church, in Via Micheli, Florence, in the 1890s. So highly finished is it, including having an ornate Gothic Revival frame similar to the one on the ultimate work, that it is virtually an altarpiece in itself. Indeed it was used as such when it was presented by the artist's stepdaughter to Christ Church, Esher, Surrey, in 1936.

Of aristocratic lineage (his mother was the youngest daughter of Thomas Coke, Earl of Leicester, the greatest agricultural reformer of his time), Stanhope suffered from chronic ill health, and this determined where he spent his adult life. After several moves in search of the right climate, he bought the Villa Nuti, at Bellosguardo outside Florence in 1873, settling there in 1880 and remaining until his death twenty-eight years later. Burne-Jones, who had known him since they had worked side by side on the ill-fated Oxford Union murals in 1857-8, and who himself profoundly influenced his style, lamented the implications of this self-imposed exile. 'It was a great pity that he ever saw Botticelli's (work)', he told his assistant T.M. Rooke in 1896. 'His absence from London has removed him...from his contemporaries and their criticism, and he's got to think more and more exclusively of old pictures to the extent that he'll almost found his own pictures on them and give up his individuality' (Mary Lago (ed.), Burne-Jones Talking, London, 1981, pp. 77-8). Yet Stanhope remains a fascinating phenomenon, a second-generation Pre-Raphaelite whose long residence in Florence and day-to-day exposure to the old masters profoundly influenced his later style and helped to give it its characteristic flavour.

Stanhope's involvement in the construction and furnishing of Holy Trinity Church represents the climax of his long collaboration with George Frederick Bodley (1827-1907), the church's architect. They had worked together earlier on the church of St Martin's-on-the-Hill, Scarborough (1862), the Chapel at Marlborough College (1875-86), the parish church at Cawthorne, Yorkshire (1875-80), and the English church, St Mark's, in Florence (1892-3). At Holy Trinity Stanhope's commitment included serving as vice-chairman of the building fund committee and selling one of his own most prized possessions, a Madonna and Child attributed to Botticelli, to pay for the church's tower.

But his greatest contribution was the execution of a series of altarpieces. The first, in which the Resurrection was represented in terms of four panels (Oberhausen and Peeters, pl. 1), dated from 1892 and was destined for the Memorial Chapel. The second, which followed four years later, comprised no fewer than fourteen panels and stood on the high altar. A third, symbolising the ten plagues of Egypt, was being planned at the time of Stanhope's death in 1908.

Alas, all three schemes were fated. The two completed altarpieces were removed and dismantled when the church was taken over by the Waldensians, a Calvanist sect, some forty years ago. The four panels of the Memorial Chapel altarpiece have re-appeared but the frame is missing, while the high altar polyptych remains completely untraced. As for the projected 'plagues of Egypt' altarpiece, the watercolour studies that were all Stanhope achieved before his death were destroyed by fire in 1991.

This makes the present painting, the highly-finished sketch for the main high altar work, all the more significant. The altarpiece itself was in tempera, a favourite medium with Stanhope, who helped to found the Society of Painters in Tempera in 1901, whereas the sketch is in watercolour. Otherwise, as is clear from an old photograph of the finished work, the difference is only one of scale. Like the altarpiece, the sketch is in an ornate Gothic Revival gilt-mahogany frame, made by the Florentine firm of Bertini which Stanhope often patronised. The iconography, too, is the same. The altarpiece is divided into five bays of varying height and width. In the central bay, the tallest and widest, are two subjects of supreme Christian significance, the Annunciation below and the Crucifixion above. To either side of these compositions are four small panels of music-making angels, while beyond these again are four figures of Old Testament prophets - Jeremiah, Ezekiel, Elijah and Isaiah, each holding a scroll inscribed with an appropriate text.

The Renaissance sources for the altarpiece are discussed at length by Oberhausen and Peeters in their article. Fra Angelico, Piero della Francesca and Botticelli are all seen as influential, bearing out Burne-Jones's comment about Stanhope's dependence on these and other masters. But the altarpiece is certainly no pastiche. Very much of its period and milieu, it could only be by Stanhope, having all the mannerisms and quirks of style that make him instantly recognisable. Above all, it shows his astonishing sense of colour. Glowing with rich reds, greens, blues and refulgent gold, it vividly illustrates another of Burne-Jones's comments to Rooke, that Stanhope's colour was 'beyond any the finest in Europe'.