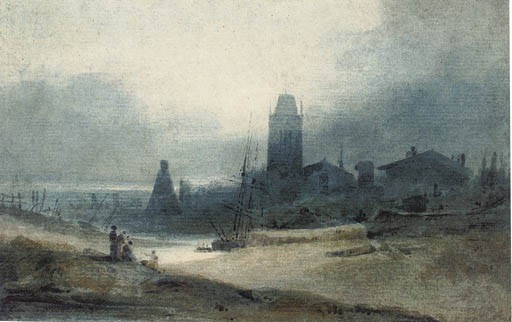 FROM THE ESTATE OF CLEM GIBSON
Lots 34-38

Clem Gibson was born in Buenos Aires in 1936 and came to England at the end of hostilities, where he had a brilliant academic and athletic career following in the footsteps of his father as captain of the Eton cricket eleven.

After military service in the 12th Lancers, he attended Clare College, Cambridge and the Université de Provence before being invited back to teach at Eton by the headmaster, Robert Birley. After a few years of teaching, he returned to Cambridge with a view to taking Holy Orders. He was eventually to decide that he had lost his vocation. He went back to teaching in the rougher end of the comprehensive system and while an amateur farmer headed a school for dyslexic boys. He was never ordained.

His passion for Norfolk School painting coincided with his marriage to Barbara in 1966 and was strengthened by his friendship with Miklos Rajnai, Norwich School expert and curator at the Norwich Castle Museum, who advised him on his purchases. He formed his collection by buying through or from Agnew's. His passion for the Norwich School of painters lasted until his death in September 2004.

Fifteen oil paintings from the collection will be included in the British Pictures sale on 8 June at King Street.

The present watercolour can be considered among the artist's most atmospheric and evocative works. Cotman has used a muted and limited palette to depict this industrialised city, just as dawn is breaking, as a romantic, picturesque scene.

The present watercolour was probably executed circa 1801, when Cotman was still a member of the Sketching Society (founded in 1799) whose members included Francia, Girtin and Varley. The influence of Thomas Girtin and the Dutch Old Masters, in particular Rembrandt's oil painting The Mill, in the National Gallery of Art, Washington, can be seen in the present watercolour. Oppé, loc.cit., writes of Cotman's early watercolours that they are 'at once heavy in their masses and delicate in their incidents, rich, even to luxuriance, in their tone but subdued in their general hue. Ambition to render momentary gradations and effects of light and atmosphere naturally realised itself in monochrome before attempting colour'.

Cotman executed two other versions of this composition, one in the British Museum formerly owned by Dawson Turner, one of the artist's chief patrons, and another signed and dated 1801 in an American collection.

Cotman's only documented stay in Bristol was in June 1800 on his way to a sketching tour in Wales. He stayed with the Norton family, drawing several of them and sketching sites in the city. Among his other Bristol views are Bristol Ferry, dated 1802.

The composition was engraved in mezzotint by Sir Frank Short, R.A. for Portfolio, 1888, 19.

British Art on Paper Including 'The Blue Rigi' by J.M.W. Turner, R.A.