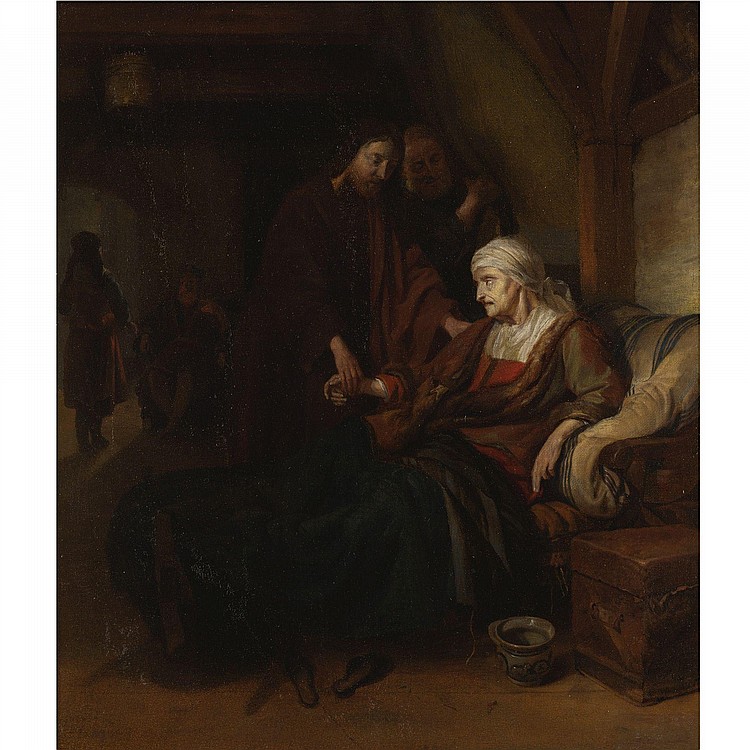 J. Smith, Supplement to the Catalogue Raisonné of the Works of the Most Eminent Dutch, Flemish and French Painters, London 1842, p. 527, cat. no. 37 (as Metsu, Christ Healing the Daughter of Jarius);
C. Hofstede de Groot, A Catalogue Raisonné of the Works of the Most Eminent Dutch Painters of the Seventeenth Century, vol. I, 1912, p.257, cat. nos. 5 (as Metsu, Christ Healing Peter's Mother-in-Law) and 6 (as Metsu, Christ Healing Jarius' Daughter);
S.J. Gudlaugsson, "Kanttekeningen bij de Ontwikkeling van Metsu" in Oud Holland, LXXXIII, 1968, p. 39 (as Metsu);
F. Robinson, Gabriel Metsu (1629-1667): A Study of His Place in Dutch Genre Painting of the Golden Age, New York 1974, p. 34 and p. 133, cat. no. 62, reproduced (as Metsu and dated 1666).
J. Giltaij in "Joost van Geel, een Rotterdamse kunstenaar", in Boymans Bijdragen. Opstellen van medewerkers en oud-medewerkers van Museum Boymans-van Beuningen voor J.C. Ebbinge Wubben, Rotterdam 1978 (with English summary), p. 142-143.
A. Waiboer, Gabriël Metsu: Life and Work, in preparation, in his section under works of questioned status, cat. no. D5, noting that J. Giltaij's attribution of the work to van Geel seems likely, based its relationship to the drawings (see note and literature).

The present picture, long considered by scholars to be a late work by Gabriel Metsu, was quite convincingly reattributed to the Rotterdam artist Joost van Geel, whose small oeuvre consists of some twenty paintings.υ1