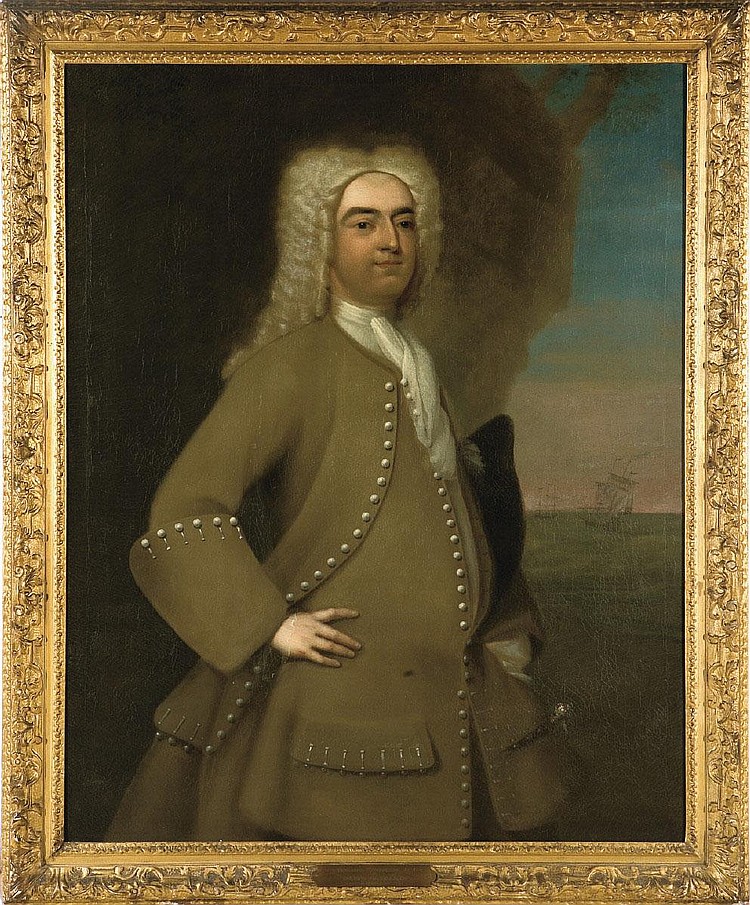 JOSEPH BLACKBURN (BRITISH, ACT. 1752-1778). PORTRAIT OF CAPTAIN NATHANIEL CUNNINGHAM, JR., CIRCA 1756. Nathaniel Cunningham Jr. (1725-1756) was the son of a wealthy prominent Boston merchant. When his father died in London in 1748, he inherited most of the estate, which was valued at 50,000 pounds and included property in Boston and Cambridge. Nathaniel Jr. married Sarah Kilby in 1754; the couple had two daughters before Nathaniel died in 1756. Buried in the Granary Burying Ground, he shares a tomb with his father, sister, and brother-in-law, the patriot James Otis.Oil on canvas, 50 x 40 inches. The reverse affiixed with museum and gallery labels.
Provenance: Descended through the family of the sitter:Mrs. James Otis (Ruth, d.1789), his sisterMary Otis Lincoln (d. 1851), her daughterMrs. Luther Stearns Cushing, her daughterMrs. Alexander S. Porter, her daughterMrs. William Stanley Parker, her daughterMr. Alexander Parker, her sonVose Galleries, Boston, 1961.Mr. and Mrs. Ellerton Jette, BostonVose Galleries, Boston, 1973Exhibited:The reverse with three labels for the Museum of Fine Arts, Boston. This painting was on loan to the museum several times during the period 1910-1948: June 27, 1910-October 5, 1910May 24, 1916 - January 17, 1917June 5, 1925 - December 18, 1931June 21, 1935 - April 30, 1948Also loaned to Colby College, Waterville, Maine, in the early 1960s.
Literature: Frank W. Bayley, " Five Colonial Painters," 1929, listed mistakenly as painted by Smibert, illustrated on p. 373." American Portraits Found in Massachusetts, 1620-1825" compiled by the Works Progress Administration, 1939, p. 100, no. 529.