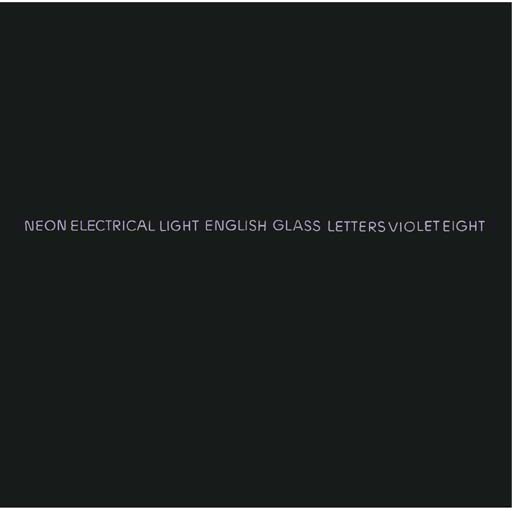 One and Eight - A description (Violet)
neon mounted directly on the wall
Executed in 1965. This work is number one from an edition of three and is accompanied by a certificate of authenticity signed by the artist.

Leo Castelli Gallery, New York
Acquired from the above by the present owner, 1987

Completely self-contained and self-referential, One and Eight - A Description (Violet), executed in 1965, is one of the groundbreaking works with which Kosuth changed the landscape of conceptual art. For it was in works from this year, especially his One and Eight series, that he first truly explored the potential, or rather the limitations, of language and art. By choosing neon as his medium, Kosuth introduces a playful quality to a work in which he illuminates the bounds and fallacy of representation itself.
The extreme literalness of One and Eight - A Description (Violet) means that it is exactly what it is. The words of which this artwork consists each form part of the description of the artwork. They refer to it, and to themselves, eight entities combining to make one. One of the key revelations in Kosuth's art was the writing of Ludwig Wittgenstein, and this work clearly adheres to the philosophers famous assertion that 'What can be said at all can be said clearly; and whereof one cannot speak thereof one must be silent' (Ludwig Wittgenstein, Tractatus Logico-Philosophicus, trans. C.K. Ogden, London, 2002, p. 27). Even the title conspires to reinforce the watertight internal validity of the work by referring to it as 'A Description'. Thus these words refer to nothing outwith the work itself, demonstrating the artist's belief that language is likewise an arbitrary and makeshift tool which refers only to itself.
As well as attacking language in this manner, One and Eight - A Description (Violet) attacks the whole notion of art and representation. The recreation, by other means, of aspects of the world around us, rendering landscapes or flowers or people, struck Kosuth as irrelevant in the modern (especially post-Duchamp) world. Instead, it is in ideas themselves that modern art gains validity and exists: 'All art (after Duchamp) is conceptual (in nature) because art only exists conceptually' (Kosuth, 'Art and Philosophy', 1969, pp. 232-234, Conceptual Art, ed. P. Osborne, London, 2002, p. 232).

On occasion, Christie's has a direct financial interest in lots consigned for sale. This interest may include guaranteeing a minimum price to the consignor of property or making an advance to the consignor which is secured solely by consigned property. Such property is offered subject to a reserve. This is such a lot