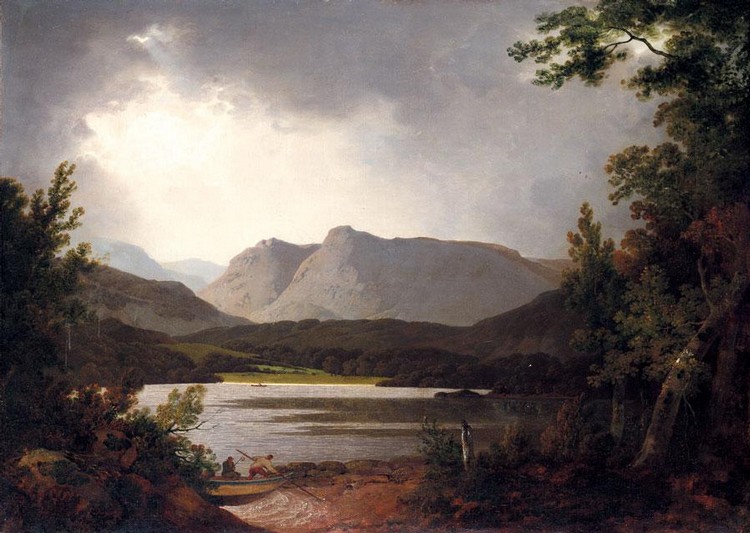 THE PROPERTY OF A DECEASED ESTATE

oil on canvas, in its original gilt frame

Probably the picture bought in 1795 from the artist by Thomas Moss Tate (died 1825);
Acquired by the Crompton family of Derby and thence by descent

This evocative landscape dates from c. 1795 and is amongst the last pictures by the artist. By the time Wright visited the Lake District it was already an essential part of the travels of anyone interested in pursuing the Picturesque. Many of these visitors found and painted scenes of dramatic impact there, but Wright was at the end of his career and his Lake District landscapes have an elegiac feel which in their own way are as truthful as his earlier more dramatic compositions.

After his return from Italy, Wright was content to chose as subjects for his landscapes either recollections from Italy or the landscape of his native Derbyshire. Nicolson remarked on "a moment of calm quite unlike anything in his work before" which he achieved in his mature Derbyshire landscapes, and on "the dream-like quality of the last Italian works". Whilst it is not clear why the mood of these late landscapes is so different, he seems to have drawn inspiration from the few rare oil paintings by Alexander Cozens and from Richard Wilson.

Wright's belated visit to the Lakes came about following a visit to Liverpool in 1793. Since his wife's death in 1790, Wright had found time to visit some of his old friends who helped to cheer his spirits. In the summer of 1793 he travelled with numerous members of his family to Bootle, a few miles outside Liverpool, where he stayed at a local hotel and enjoyed trips to the coast. His niece, who was with him on this occasion, recorded that: "His old and intimate friend Mr Thos Moss Tate of Liverpool came most evenings and staid till after breakfast... when Mr Wright had been about 6 weeks at Bootle he received a letter from Mr Gisborne, who was then at the Lakes, in which he said, he hoped the date would bring a blush upon his face for not having visited that fine & interesting country & wished he would join him there; Mr Wright & Mr Tate set off, spent a week with Mr Gisborne & returned highly delighted with all they had seen..." (Niece's memoir, MS2, Derby Public Library). This was the first of two visits to the Lakes, as he returned to Liverpool in July 1794 with his eldest daughter and from there set off again with Tate to the Lakes.

Wright's friendship with Tate went back to 1768 when he travelled to Liverpool and stayed there for three years with the intention of obtaining commissions in a city which had become a leading provincial centre for the arts. During this period he boarded with Richard Tate, a prominent local merchant and artist, and befriended his young son, Thomas Moss Tate who was to become the older artist's companion in later life. Both Richard Tate and his brother, William, were artists, and Thomas Moss Tate became Wright's pupil. Wright clearly valued Tate's opinion on his pictures - in a letter to John Leigh Philips on 20th May 1791 he wrote of a cottage scene "in wch according to the opinion of my friends particularly Mr T. Tate I have succeeded". Tate had a substantial collection of late landscapes by Wright, including a view of Borrowdale, an Outlet of Wyburne Lake, a view in Wales and some Italian and Derbyshire views. He also owned Windemere with Langdale Pikes. Benedict Nicolson believed that the present picture was a copy of a lost work but there seems no reason to doubt that it is by Wright. The quality of the painting of the sky is far too good to be the work of a copyist, and the treatment of the water is entirely characteristic of his late work. The figure pushing off the boat is not of the same standard, but appears to be a later addition. As Wright wrote to Philips on 29th May 1795: "My friend T. Tate has bought a picture I painted soon after my return from ye Lakes of Langdale Pikes seen from Low wood. When I have put a figure in, pushing off a boat, it is to be sent to Manchester for your inspection" (MS Derby Public Library). Moreover the picture comes from an old Derbyshire collection with strong local connections and is still in its original Wright frame

We are grateful to David Fraser and Sarah Allard for their assistance in cataloguing this painting.