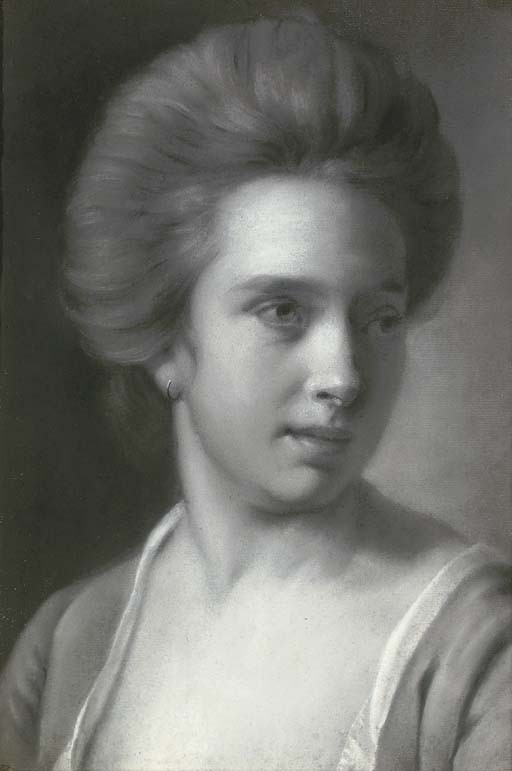 Portrait of a lady, bust-length, her head turned to the right, wearing an earring
with inscription 'Drawn by 'Wright of Derby'/N.B. This drawing will be spoilt if/touched by finger, brush or cloth.' (on the reverse)
black and white chalks
16 x 11 in. (40.3 x 28 cm.)

Property from the Collection of Denys Eyre Bower, Chiddingstone Castle

Denys Bower's childhood gives some clue to what he was to become. Born in 1905 in the village of Crich in Derbyhire, he came of a well-established Derbyshire family. His father was on the staff of the old Midland Railway, of which his grandfather was a director and pioneer of the metric system. Denys began collecting at the age of five: stamps, like most children, but already he showed the collector's eye. He began with a Penny Black and studied arcane matters such as watermarks and perforations. It was a collector's household. His father collected Chinese porcelain, his brother was an expert in Pinxton ware, and Denys collected everything.

On leaving school at seventeen he joined the staff of the Midland Bank. He now restricted his collecting to four areas: Buddhism, Egyptian antiquities (inspired by the Tutankhamen discoveries, he sought advice from Sir Flinders Petrie), Stuart and Jacobite history (he was enthralled by the activities of Prince Charles Edward in Derbyshire) and, above all, Japanese swords and lacquer.

After twenty years he married, left the bank, and removed to London, where he established a specialist Oriental gallery in Baker Street. He made his home in one of the Georgian houses in Portman Square, where he set out his collections.

After twelve happy years collecting avidly. He lost both home and gallery, but decided to buy a country house near London as his home, and admit the public for a small fee to see his treasures.

At Whitsun 1956 he opened Chiddingstone Castle to the public. Within months, with the help of a few friends, he had shifted all his possessions to the Castle and set out the collections much as they can be seen today.

Not long before the opening of Chiddingstone, Denys had met a young lady who posed to him as a French Countess. They became engaged, but after a year she suddenly broke off the engagement. Denys, distraught, decided to visit her, taking with him an ancient revolver. As he took the gun from his pocket it went off and hit the lady. She was only slightly hurt, but Denys thought he had killed her and turned the gun on himself. Denys was arrested, charged and sentenced.

Ultimately, it was the bank who had loaned him the money to buy Chiddingstone Castle, that intervened and led to a reversal of his misfortunes. Anxious about their loan, they asked their solicitors to advise on the problem. The solicitors, astounded by the quality of the collections, withdrew their initial sober advice that the Castle was not viable, suggested a plan for its redemption and joined battle with the Home Office. An appeal was made to the Lord Chancellor (then Lord Kilmuir). He immediately intervened, and six weeks later the Home Office announced the release of Denys Bower, (he had served five
years in prison).

Denys retuned to Chiddingstone and collecting. He died in August
1977.
Mary Eldridge

We do not know the exact date of Bower's purchase of the present
drawing by Wright catalogued below but he was evidently first drawn to the artist as he hailed from Derbyshire, his home county. An oil
painting of Mount Vesuvius erupting by moonlight, (23 x 28 in.)also from Chiddingstone Castle, is included in the British Pictures Sale on 8 June.

The present sitter, with her piled-up, powdered hair typical of the fashion in the 1770s, seems to be the same as in the oil painting of An Old Woman reading a letter in the Company of a Young Girl, one of four overdoors, one of which is dated 1772, at Radbourne Hall (Nicolson, op.cit., no. 203, pl. 94). Although the sitter looks somewhat older in our drawing, nevertheless it would have to have been executed before Wright left England for Rome in October 1773, returning in September 1775.

William Bemrose, who lent this drawing to the 1883 Wright of Derby exhibition, was the son of a direct descendant of the artist, Margaret Romana Simpson, who married his father, also called William, in 1858. He wrote the first monograph on the artist, The Life and Works of Joseph Wright, commonly called 'Wright of Derby', London and Derby, 1885, and owned a large collection of his works as well as a number of documents by and relating to the artist, including the account book, now in the National Portrait Gallery (see Nicolson, op.cit., pp. 22-3, 285). As well as pictures inherited through direct succession from the artist he also purchased a number of works by Wright, but a label on the back confirms that he lent our drawing to the 1883 Derby Exhibition.

British Art on Paper Including 'The Blue Rigi' by J.M.W. Turner, R.A.