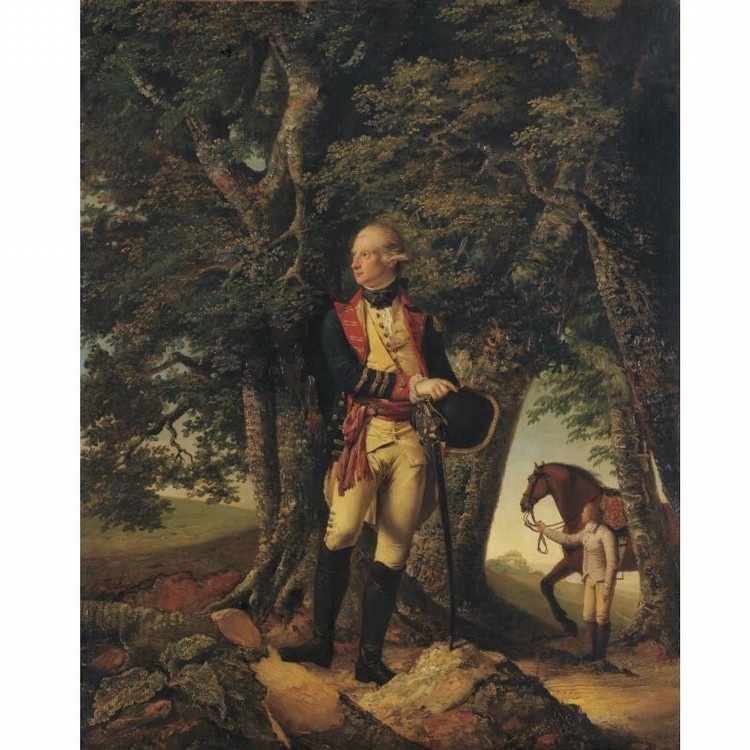 full-length in uniform, standing in a landscape with his horse and groom beyond

With Arthur Tooth & Sons, London;
From whom purchased by Mr. and Mrs. Lawrence Thaw in the 1950s.

This beautifully preserved Portrait of Robert Shore Milnes, painted in 1771/72, is among the most exceptional portraits by Wright of Derby still in private hands.υ1 It was painted when Wright had reached an artistic peak, not only in portraiture, of which he was already an acknowledged master, but in the scientific, landscape and literary pictures with which he proved himself to be among the most innovative artists of the 18υth Century.

Robert Shore Milnes (1747-1837) was the eldest son of John Milnes, a successful cotton manufacturer of Wakefield, Yorkshire, and his wife Mary Shore, the daughter of Edward Shore of Norton Hall. He entered the military, becoming first Coronet in the Royal Horse Guards ("The Blues") in March of 1770, and then Lieutenant in November 1772 and finally Captain in 1776.υ2 He eventually left the military and took up the duties of a colonial administrator, became the Governor of Martinique from 1795 to 1796, and then the Governor of Lower Canada from 1797 to 1807. Owing to ill heath, he returned to England in 1805, although he did not immediately relinquish his governorship. He was created First Baronet Milnes in 1801.

Wright's novel approach to portraiture is evident in the unusual composition of the picture and in the unusual painting technique he employed. Milnes is shown standing in a bosque, at the foot of a pair of twin oak trees. He is wearing the uniform of the Royal Horse Guards, his right foot resting on the trunk of a fallen tree and his arm outstretched in a commanding gesture. The overall sense is one of action and confidence, ideally suited to the portrait of a young officer. The pose of the figure clearly recalls Reynolds' grand, full length military portraits of the 1760s of which Wright must have been fully aware; however, Wright's attention to the landscape and the sense of light which infuses it are his own. The figure of Milnes is painted in a relatively soft and smooth technique, with small dots of paint to highlight details such as braid and other military decoration. Surrounding the figure is a lush and full bodied landscape in which Wright has applied the pigments in an entirely different manner, almost as if it had been painted by an another artist altogether. The impasto is thickly and energetically applied, impressionistic in its vigor, and in parts is certainly painted not with a brush but with a palette knife. The effect at close inspection is disjointed, with the figure of Captain Milnes nestled and set back into the landscape. However, from a few steps away, at the distance at which the painting was meant to be viewed, the full force of Wright's technique becomes evident: the flickering brushstrokes of the landscape and the solid strong figure of Milnes synthesize into a dynamic and imposing portrait of a young officer, ready to jump on the mount that his groom holds in the background.

This singular technique also appears in a handful of other portraits of the early 1770's of the same format and size, which clearly demonstrates Wright's growing interest in landscape as an art form. The most famous example of these paintings is undoubtedly the Portrait of Mr. and Mrs. Coltman (circa 1771, National Gallery, London). It depicts a young married couple, intimate friends of the artist, in a landscape posed next to a similar tree and with a groom leading a horse up from the back right. The closest comparison however, is the Portrait of Colonel Charles Heathcote (private collection). The picture depicts the Colonel in full uniform, standing by the ubiquitous oak tree, his hand outstretched. The two military portraits act almost as pendants: they are the same size and demonstrate the same interest in landscape. They were so close, in fact, that when they were exhibited at the Society of Artist exhibition as consecutive numbers, and their descriptions in the catalogue and contemporary press made it difficult to distinguish between the two.υ3 This same thick, lavish, "crusty" use of paint which first begins to appear in these portraits is then employed by Wright in some of his most innovative and important landscapes of the next few years, including the nocturnal Earthstopper on the Banks of the Derwenter of 1773 (Derby Art Gallery) and the famous Old Man and Death of 1773 (Hartford, Wadsworth Atheneum).

Although Wright had somewhat tempered this landscape style after his return from Italy (he left October 1773 to return in September 1775), he produced one more portrait painted with a similar landscape background which is perhaps the more natural mate to the present canvas than the Portrait of Colonel Heathcote. In a letter of May 8, 1776, Wright informs his brother Richard that he has "in hand a small full-length of Mr. Miles (sic), brother to Capt. Miles I painted at Derby some time ago...I expect, in a day or two to have his picture finished; a day will compleat it υ3." This picture is the Portrait of John Milnes, now in the Musée du Louvre (see fig. 1).υ5 It seems highly likely that Wright consciously painted that picture in the same style as the portrait of the sitter's elder brother; again, both pictures are of the same format and size, and Wright poses the younger Milnes against the same oak tree, and with an open landscape beyond. Egerton notes quite rightly that but for the artist's letter which documents that the John Milnes was finished in 1776, one might have dated the painting to before Wright's Italian sojourn, circa 1772. Whether the two paintings were ever hung as pendants is unknown, but they could happily have been so.υ6

In the Wright of Derby exhibition catalogue of 199, Paul Mitchell published a fascinating study of the artist's framing practices, covering the length of his career and based on a large sampling of Wright's surviving output (see "Wright's Picture Frames," 1990 op. cit., pp. 272-288). Some styles of frame seem to have been devised by Wright himself, presumably in tandem with a trusted framer; other paintings were fitted in more standard models. The annotation in the account book for the Milnes portrait tantalizingly mentions that the sitter paid for the frame at the same time he settled up for the painting (see footnote 1). Certainly, the frame on the present painting is entirely appropriate, both in style and date (although apparently re-gilt in the mid 19υth Century), and closely relates to other examples on Wright portraits. Mitchell notes that it is a rococo style of a London specialist, rather than the type of rococo frame that Wright sometimes used, produced by a local Derby artisan. While it is hard to know for certain if it is the picture's original frame, it is certainly very possible. Mitchell notes that Wright's account book notes a payment to the London frame and looking glass maker James Milbourne, of the Strand, London, for "Milnes frame." Certainly, this could be a mention for the present frame, but as Mitchell quite rightly points out, it could be a payment for one of the frames intended for Robert Milnes' brother, John, who as noted was one of Wright's biggest patrons.

1 Wright's account book does not give the date of his portraits, but as Nicolson noted (see op. cit., p. 171) the paintings tend to adhere closely to the chronology suggested by the entries. Thus, the listing for Milnes is amongst those for securely datable pictures of the very early 1770s. Indeed the picture was exhibited at the Society of Artists in 1772. Milnes paid £31.10 for his portrait, and a further annotation notes "Paid at the same time for frame, etc."; for a discussion on the frame, please see the note.

2 The painting has traditionally been called a Portrait of Captain Robert Shore Milnes, although the sitter attained the rank of Captain only a few years after the portrait was painted, in December 1776. Wright's account book styles Milnes as "Captain", and Nicolson (op. cit.) stated that it may have been that the artist simply mistook his sitter's rank. Egerton, however, notes that the army lists of the era are not an entirely accurate guide to promotions as a new rank might only be "gazetted" or published some time after the event. She also suggests that in fact Wright may have entered the portrait in his account books some time after it was painted (and thus presumably when Milnes had attained his new rank).

3 The catalogue of the 1772 Society of Artists exhibition describes numbers 369 and 370 each simply as "A Portrait of an Officer, a small whole length." Wright's "experimental" technique was not fully appreciated by all of his contemporaries; the art reviewer of the Morning Chronicle in discussing the 1772 exhibition notes that the "Officer is a good bold figure; but the tree which he is supposed to stand, as well as the shrubbery, is by much too glaring." It seems that this was in reference to the Portrait of Colonel Heathcote.

5 The Portrait of John Milnes entered the collection of the Louvre in 1985 with the sitter as unknown; however Alex Kidson noted the similarity of the sitter to a securely identified portrait of John Milnes by Romney, painted some years later and also the relationship of the picture to the Portrait of Robert Shore Milnes (for a fuller discussion on the identification of the Louvre picture see Egerton, op. cit., pp. 68-69, cat. no. 27).

6 Egerton (op cit., p. 68), calls them "comfortable but not contrived companions." Wright's own relationship with John Milnes was to prove particularly fruitful; the younger brother would become one of the artist's greatest patrons, purchasing some eleven works by the artist, including Fireworks Display at the Castel Sant'Angelo, Rome (now Walker Art Gallery, Liverpool), the Edwin, from Dr. Beattie's Minstrel (Hambros Bank Limited), as well as the untraced View of Gibraltar during the Destruction of the Spanish Floating Batteries, 1782, which at 420 guineas was the most expensive painting sold during Wright's lifetime.