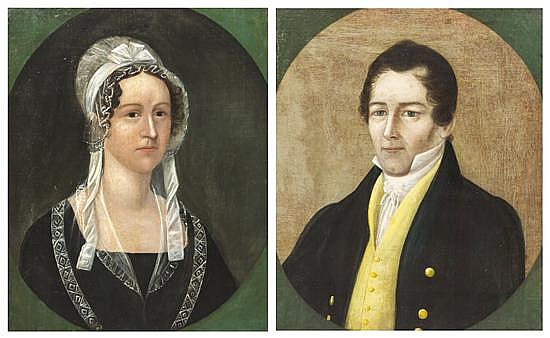 Property from the Collection of Mr. and Mrs. Fred Seff, Chicago, Illinois

In the December 19, 1798 edition of the Baltimore Intelligencer, the artist Joshua Johnson described himself in an advertisement as a "self-taught genius," who could "execute all commands with an effect, and in a style, which must give satisfaction." Known as the earliest African-American painter active in the United States, Johnson was first listed as a portraitist in the Baltimore city directories in 1796. Long thought to be a slave belonging to the artist families Peale and Polk, he was in fact the son of a white man and a black slave, who was given his freedom in 1782, and whose independent career flourished until 1824.

The present pendant portraits were executed during Johnson's period of greatest activity, from 1803-1814, when he became more assured in his painterly skills. Both Mr. Hilmer (Helmer) Schumacher and his wife, Rachel, are painted in three-quarter view and with straightforward gazes, typical techniques of the artist's. Johnson also preferred background colors which complemented his sitters' costumes, as evidenced by the taupe background that sets off Mr. Schumacher's vibrant yellow waistcoat. Likewise, the intense green of the spandrels used in both portraits is seen elsewhere in the artist's work.

Hilmer Schumacher was living in Baltimore as early as 1810, when he married Rachel Cloberg. He was listed in the Baltimore city directories as a sugar refiner for a number of years, and the couple had one recorded son, Frederick, born circa 1812. The Schumacher's portraits were first documented in 1943 by the art historian and genealogist J. Hall Pleasants, when they were owned by a descendant of the sitters.

For Sale from Hindman 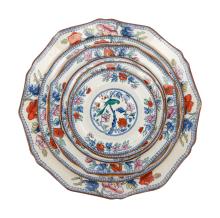 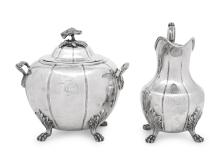 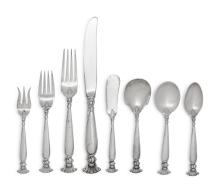 A Wallace Romance of the Sea Silver Flatware Service 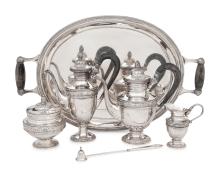 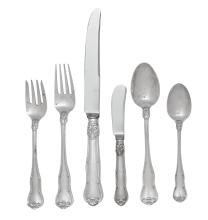