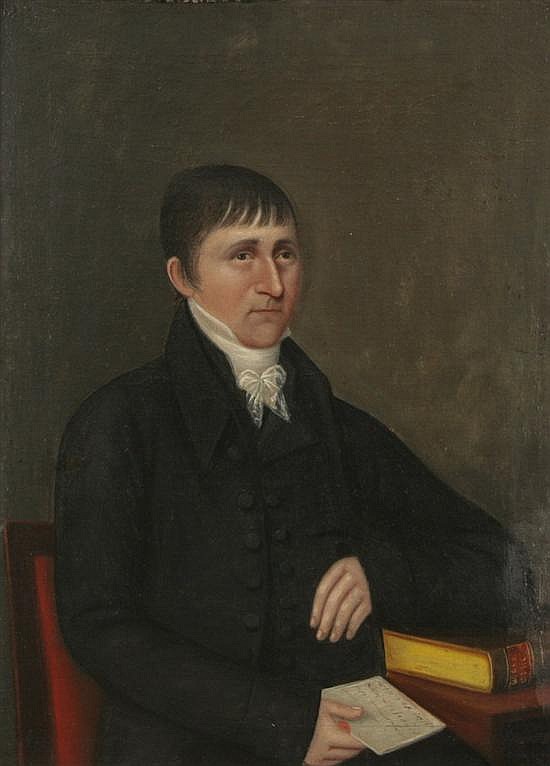 Lined, scattered craquelure. 1/2 in. vertical raised area at top left edge of back of chair; smaller raised area in upper right; stretcher stress from earlier stretcher; nickel-sized area on sitter''s right proper shoulder appears to have been repaired; paint is thin in some areas, especially in background and jacket; 6 in. area of bloom at right edge above book. UV: Heavy varnish makes possible areas of inpaint difficult to detect.

Joshua Johnson, a freed slave of likely
West Indian and French background, is
the earliest documented professional
African-American painter. He lived and
worked in Baltimore from about 1795
to about 1825, painting portraits of
members of prominent Baltimore
families as well as of other locals. He
was largely influenced by the work of
Charles Willson Peale, Charles Peale
Polk, Rembandt and Raphaelle Peale.
According to the exhibition catalogue
mentioned below, 'The gentleman
shown in this portrait traditionally has
been referred to as Elisha Stansbury
(1791-1883), the mayor of Baltimore
from 1848 to 1850. He married Eliza
Eckel, the daughter of Philip P. Eckel of
Baltimore, on May 24, 1817, and he
would have been only fifteen years old
when the portrait was painted, which
does not coincide with the apparent
age of the subject. It is more likely that
the portrait represents the mayor's
father, also named Elisha or Elijah
Stansbury. He was born in 1756 and
died in Baltimore on August 21, 1837.
He was a tailor by trade and was
married by the Reverend Otterbein on
November 1783 to Elizabeth Gorsuch
whose family intermarried with the
Tysons and Ellicots. 'Stansbury sits in a
red upholstered chair ... and holds a
letter with mock writing on it in his right
hand and has his left arm on a book
which rests on the table.
PROVENANCE:
Descended in the family of the sitter
Sold to James McCluskey
Private collection
EXHIBITED:
Baltimore, Maryland, Maryland
Historical Society;
Williamsburg, Virginia, The Abby
Aldrich Rockefeller Folk Art Center;
New York, New York, The Whitney
Museum of American Art;
Stamford, Connecticut, The Whitney
Museum of American Art, Branch,
Joshua Johnson, Freeman and Early
American Portrait Painter,
September 26, 1987-November 9,
1988, p. 146, no. 57,
(illus. in catalogue).