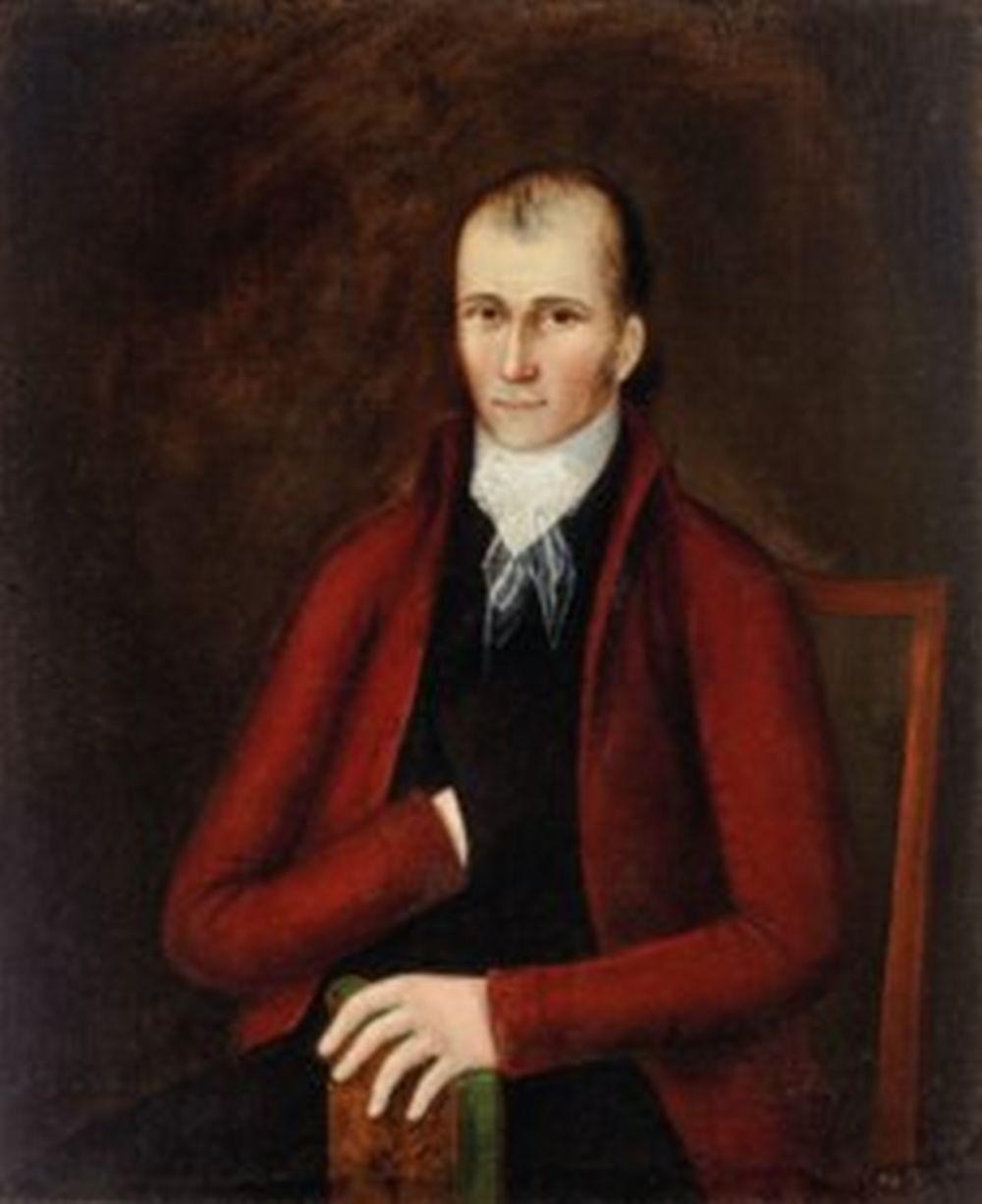 Provenance: Possibly Margaret Ann Roberts, thence by descent Richard F. Harris, St. Joseph, Missouri Peter H. Tillou, Litchfield, Connecticut Collection of Adrienne and Edward Hoffman, Baltimore EXHIBITED: Baltimore, Maryland, Maryland Historical Society; Williamsburg, Virginia, The Abby Aldrich Rockefeller Folk Art Center, Colonial Williamsburg; New York, The Whitney Museum of American Art; Stamford, Connecticut, The Whitney Museum of American Art, Branch, Joshua Johnson: Freeman and Early American Portrait Painter, 26 September 1987-3 January 1988 (Baltimore), 17 January-15 May 1988 (Williamsburg), 18 June-25 August 1988 (New York), 9 September-9 November 1988 (Stamford). LITERATURE: Carolyn J. Weekley and Stiles Tuttle Colwill, Joshua Johnson: Freeman and Early American Portrait Painter (Williamsburg, VA and Balitmore, 1987), p. 105, no. 6. The sitter identified as Thomas Donovan (1765-1858) of Baltimore, this portrait by Joshua Johnson is a captivating example of his early work. In 1799, Donovan was recorded as an innkeeper at 36 Water Street and it is likely that this portrait was painted around this time. Donovan appears to be in his late thirties and this piece exhibits characteristics of Johnson’s early works. There is a hesitancy in this rendering when compared to the crispness of his later works and the highlights in Donovan’s clothing are applied rather lightly. Also, this is one of Johnson’s only works depicting a male sitter with his hand inside his vest. This pose possibly shows influence by Charles Peale Polk whom Johnson emulated in his early works before he gained confidence. While early, this portrait does include many of Johnson's signature details such as almond-shaped eyes and wavy fingertips which indicate that he was finding his own artistic style. Johnson also painted a portrait of Mrs. Donovan, Anne Cole, and their daughter Elinor Donovan which is last recorded in the collection of Dr. and William H. Cosby Jr. The couple had four other daughters and a son. This portrait was likely passed down to Elinor’s daughter Margaret Ann Roberts and descended in the family until being acquired by dealer Richard F. Harris of St. Joseph, Missouri (Carolyn J. Weekley, Stiles Tuttle Colwill et al., Joshua Johnson: Freeman and Early American Portrait Painter (Williamsburg, VA and Baltimore, 1987), pp. 105-106). Johnson is renowned as the first African American professional painter in America. To learn more about the artist see lots 117 and 132. 30 SYD LEVETHAN: THE LONGRIDGE COLLECTION (LOTS 123-131, 136-143 AND 151-163)