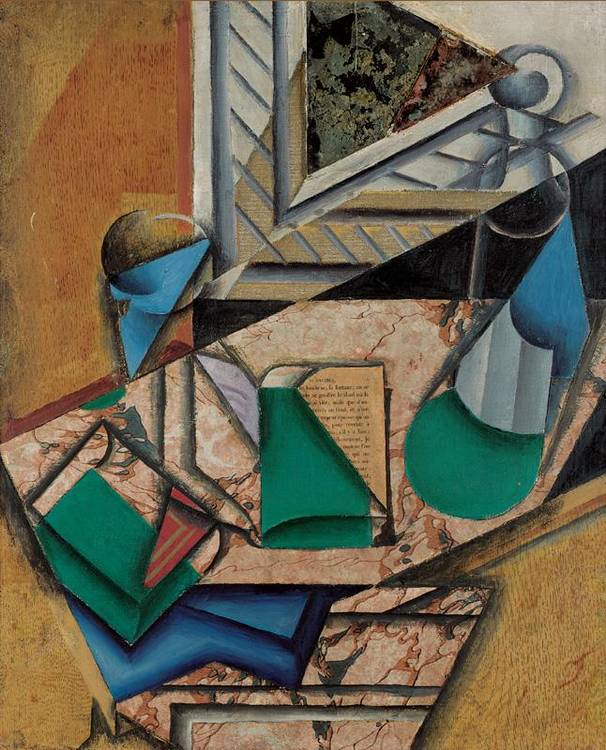 Signed Juan Gris on the reverse

PROPERTY FROM THE ESTATE OF RUTH G. HARDMAN

This detailed still-life demonstrates the creative talents of Juan Gris at his finest. Executed at the height of the Synthetic Cubist movement in 1914, the composition conveys both the visual and tactile effect of a marble console, on which lays a book and above which hangs a mirror. In order to create this work, Gris constructed an elaborate paper collage on canvas and enhanced it with oil and reflective glass. Oftentimes, as in the present work, he made use of 'imitation-wood' paper and outlined the objects of his compositions in oil so that they would appear more prominenent in the composition. And more rarely, as seen in this case, he would incorporate less traditional materials, such as mirror, into his compositions, creating works that were nearly three-dimensional in their ability to engage with their surrounding space. The result of his endeavour here is undoubtedly extraordinary, and this picture is a testament to Gris's unparalleled vision during this important period of 20th century art.

Although Braque and Picasso are considered the pioneers of Cubism and had used papier collé in their compositions before other artists of the avant-garde, it is often argued that Gris made the most of this technique. Mark Rosenthal has written extensively about Gris's paintings from 1914, considering this year to be one of the most important of his career: "In 1914, Gris wholeheartedly yielded to Picasso and Braque's technique of papier collé, where paper fragments are pasted to the picture surface (see figs. 1 and 2). As usual, however, his approach was far more complex than theirs. He often covered virtually the entire canvas with an interlocking structure of diverse papers, an innovation that was intimated in the last two works discussed. Each piece of paper was cut preceisly to fit a place in a predetermined, abstract compositon. This literal structure of parts meant that Gris had at least somewhat embraced the concept of the tableau-objet; that is, the importance of the artwork as a physical entity was meant to exceed its function as a medium of representation" (Mark Rosenthal, Juan Gris (exhibition catalogue), University Art Museum, University of California, Berkeley, 1983-84, p. 50).

By far, Gris's collages were considered some of his most successful compositions, and those that he executed during 1914 are regarded as the best among them. He created these works with both a subtlety and complexity achieved by very few artists of his generation, and was duly recognized for his ability. Mark Rosenthal has written, "A collage by Gris is an immensely subtle enterprise. Underlying what Kahnweiler called a 'flat, coloured architecture.' By this he means an overall structure, largely based on regularly shaped planes that are contiguous or overlapping, such as in Guitar, Glasses and Bottle (see fig. 3) and the Newspaper (see fig. 4), both 1914. Overlying is the texture of cut paper. Each arragement may have three aspects: first, as a pictorial element; second, as a sign of a representational object, by analogy of color or by containing a visual clue; third, as simply a piece of paper ('the thing itself'), with a certain pattern having tactile and material interest incorporated into the whole composition.... Gris drew, painted, and/or modeled on these fragments, so that they are rarely perceived in a completely forthright manner. The still life representation, which is the outermost 'skin,' weaves a relationship with these structural aspects. Abstraction and representation are moot qualities in these highly refined works" (ibid., p. 53).

Over the course of the 1910s, several artists would attempt to adopt the perspectival and compositional devices that the Cubist founders Braque and Picasso had started using at the end of the first decade, but few would be as highly regarded for their talent and vision as Gris. As a result, Gris was considered as one of the leaders of the Cubist movement, along with Picasso, Braque and Léger. Recalling this period and her association with the Cubists, Gertrude Stein identified Gris as an artist of foremost importance among these cultural figures: "The only real Cubism is that of Picasso and Juan Gris. Picasso created it and Juan Gris permeated it with his clarity and exaltation" (Gertrude Stein, The Autobiography of Alice B. Toklas, New York, 1933, p. 111). Among others to recognize his extraordinary talent was the celebrated dealer Daniel-Henry Kahnweiler, who was the first owner of this work. After being forced to sell this painting by the orders of the French government following World War I, Kahnweiler eventually re-purchased it through his Galerie Simon in the 1920s. In the years that followed, this picture was acquired by the French cardiologist, Dr. André Cournand, and later by Arnold Maremont, the successful Illinois industrialist.

This work has been requested for the exhibition Juan Gris (1887-1927) to be held at the Museo National Centro de Arte Reina Sofia, Madrid, from June 21 until September 21, 2005.

Impressionist and Modern Art, Part One