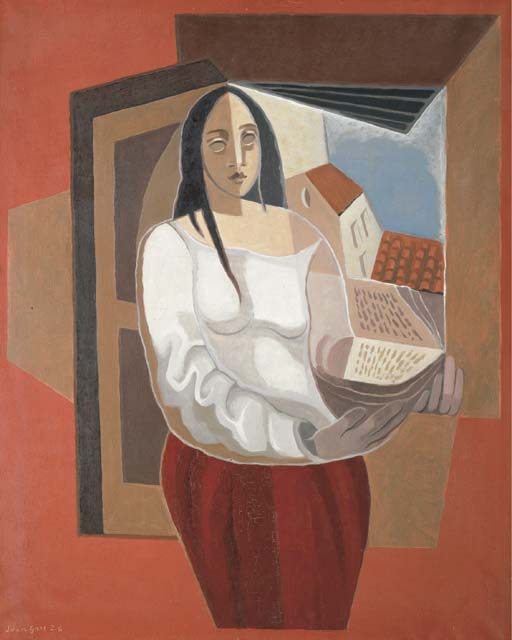 Galerie Simon, Paris (no. 9532).
Svensk-Franska Konstgalleriet, Stockholm.
Acquired from the above by the parents-in-law of the present owner in 1947.

THE PROPERTY OF A LADY

Painted in 1926, during a period in the last few years of Gris' life which Daniel-Henry Kahnweiler considered the most fruitful and beautiful of the artist's career, La liseuse is a lyrical depiction of a young woman in front of an open window. Constructed with typical overlapping forms, the foundation of the work recalls some of the harsh angles of Gris' more classically cubist period, but here the artist combines this with the serpentine line of the woman's body and clothing, presenting an altogether softer, more harmonious composition. Gris further treats us to a compositional device typical of many of his earlier compositions: the open window. Through it we can see red rooftops, in sharp relief against a deep blue sky, that echo the angularity of the room and lend depth and verisimilitude to the composition.

In assessing Gris' painting in the last few years of his life Kahnweiler wrote: 'From the purely technical point of view it was certainly the most rigorous period of his life. Stately and firm, his paintings had become the "flat coloured architecture" of which he talked. Everything was restored to the flat surface... Gris revealed himself at this time as a classical painter: lucidity, purity, the preponderance of the work of art itself, the predominance of the general, the static quality, all the symptoms are there. He is classical too in the way he subordinates his emotion to the work in which it is expressed' (D.H. Kahnweiler, Juan Gris, His Life and Work, London, 1969, pp. 129-130).

La liseuse was used as the basis of a lithograph that Gris produced as one of four illustrations for Gertrude Stein's A Book Concluding with 'As a Wife Has a Cow', A Love Story, published by the Galerie Simon in Paris in 1926. There is also a small gouache of the subject from the same year, which was sold through Alfred Flechtheim in Dusseldorf in 1930.