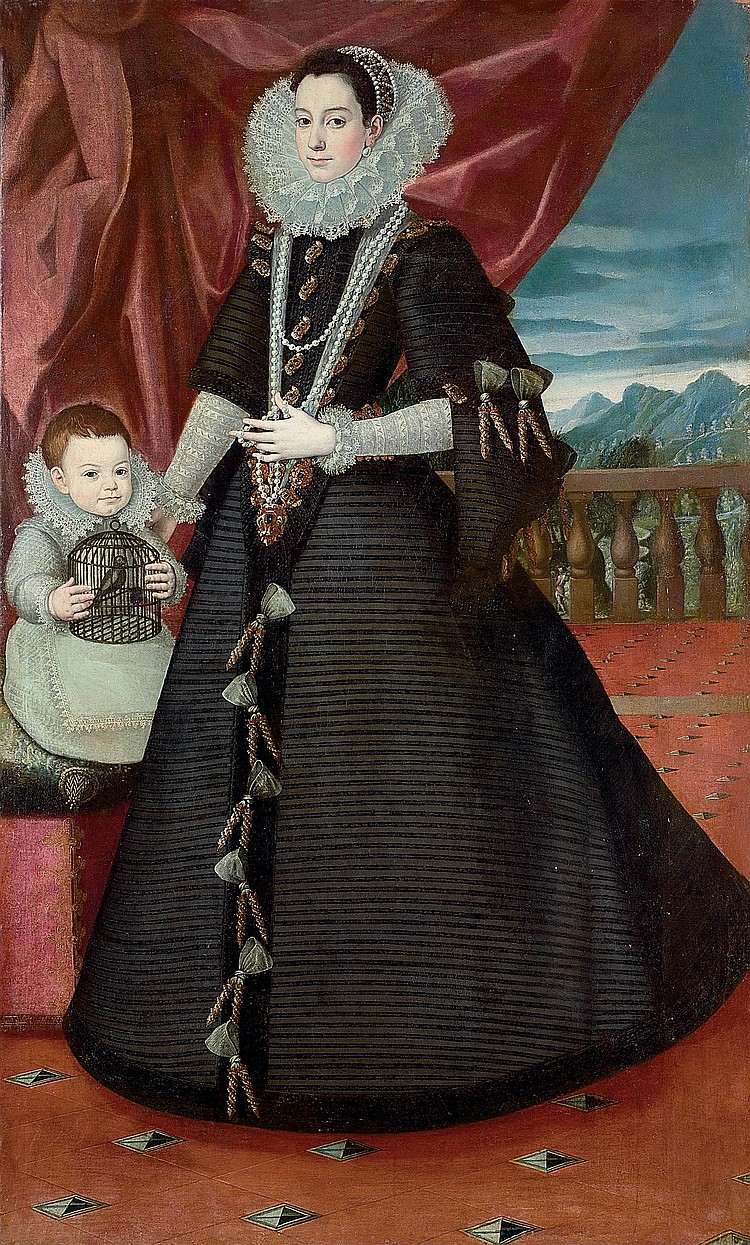 THE PROPERTY OF A GENTLEMAN
No VAT will be charged on the hammer price, but VAT at 17.5% will be added to the buyer's premium, which is invoiced on a VAT inclusive basis.
Please note Payments and Collections will be unavailable on Monday 12th July 2010 due to a major update to the Client Accounting IT system. For further details please call +44 (0) 20 7839 9060 or e-mail [email protected]
This elegant and enchanting portrait of a lady with her young child holding a birdcage has been dated to circa 1606 by Maria Kusche on the basis of the type of lechuguilla or ruff worn by the lady (op. cit., p. 190). Pantoja had been appointed painter to the King in the final years of Philip II's reign, and was thus already fully ensconced in the position when Philip III took over in 1598. In his early years Pantoja had scrupulously followed the path of Sánchez Coello, with whom he had studied in Valladolid. Later, although he was to adapt his style by absorbing new ideas from contemporary Flemish painters such as Pourbus and Rubens, Pantoja never fully departed from the more archaic - and more quintessentially Spanish - manner that is still so evident in this refined double-portrait.

Like his master, Pantoja was often commissioned to portray children, notably the Infanta Ana Mauricia, whom he painted at several moments of her infancy (Kusche, op. cit., pp. 137-49). The portrayal of mother and child together is less frequent in his oeuvre. The most notable exception to this is the much earlier Portrait of Margarita de Cardona with her daughter, of circa 1580, now in the Nelahozeves Castle, Prague (op. cit., p. 41), in which the child is seated in an armchair and holds onto her mother's hand. The charming motif used here of a child holding a birdcage seems to be unique in Pantoja's oeuvre.

According to Maria Kusche (private communication, May 2010) there used to be a label on the reverse of the picture that read Persiñena. This is an area of Aragon which was in the fiefdom of the Counts of Ribagorza, a title that belonged to the Dukes of Villahermosa, who were among the most important patrons of Pantoja. Perhaps significantly for the early provenance for this picture, a portrait by Rolan Moys of circa 1574, that depicts Ana Maria Manrique de Lara, also a member of the Villahermosa family, shares the same basic composition as the present work, of a lady standing on a red tiled terrace with a balustrade and drape, leading to a landscape in the corner (op. cit., p. 192, fig. 137). Other pictures from the Villahermosa family also found their way into the collection of the Dukes of Osuna, from which the present lot was sold in 1896. The collection of this great dynastic family included works by Sánchez Coello, Tintoretto, Rubens, Ribera, Guido Reni, and Goya, who painted portraits of several family members including the Duke and Duchess of Osuna with their children of 1788 (Madrid, Prado).