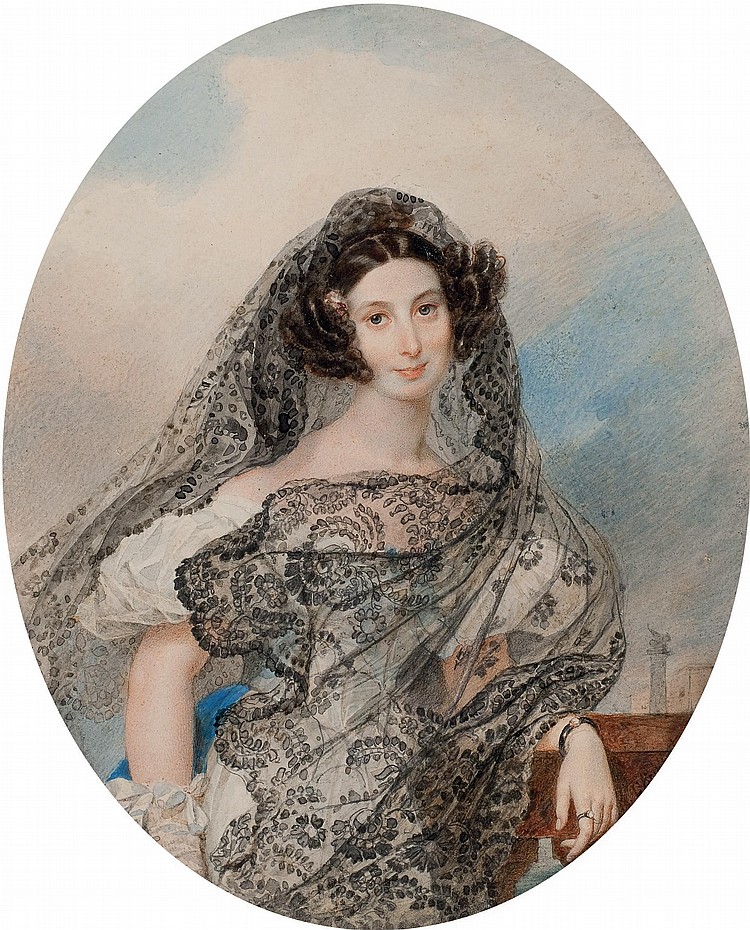 London, Belgrave Square, Exhibition of Russian Art, June - July 1935, no. 347, lent by Alexandre Popoff; the sitter incorrectly identified as Princess Zinaida Volkonskii.
Moscow, Museum of Private Collections, Pushkin's Contemporaries: 100 Portraits in Watercolour from a Parisian Collection, May - July 1999. Moscow, Museum of Private Collections, 'Parisian Discoveries' of Pushkin's Era: In Commemoration of 100 Years Since the Birth of I. S. Zilberstein, 2005, no. 9.

I. S. Zilberstein, 'Parisian Discoveries' of Pushkin's Era, Moscow, 1993, listed p. 260, illustrated p. 255; the sitter incorrectly identified as the wife of the architect Cavos and the portrait itself incorrectly attributed to Alexander Benois.
M. Baruch & I. Sakharova, Russian Portraits in Watercolour, 1825-1855, Paris, 1994, pp. 36 and 37, illustrated.
Exhibition catalogue, 'Parisian Discoveries' of Pushkin's Era: In Commemoration of 100 Years Since the Birth of I. S. Zilberstein, Moscow, Museum of Private Collections, 2005, illustrated p. 64, no. 9.

No VAT will be charged on the hammer price, but VAT at 15% will be added to the buyer's premium which is invoiced on a VAT inclusive basis.
The only Russian artist of the 18th century to be recognised internationally during his lifetime, we are most familiar with the masterpieces of Karl Pavlovich Briullov (1799-1852) executed in oil, which grace the State Tretyakov Gallery, the Pushkin Museum of Fine Arts and the Russian Museum in St Petersburg among others. This portrait of Giovanina Pacini (1803-75), painted exuberantly with strong but light brushstrokes, testifies to his mastery in watercolour. The chiaroscuro, attention to detail and application of semi-transparent layers lend the portrait depth while simultaneously infusing it with air; the subject emerges from her delicate shawl smiling softly.

This beautiful portrait depicts the elder of the two foster children of Countess Iulia Pavlovna Samoilov, one of the richest women in the Russian Empire, a relative of Catherine the Great and Briullov's lover for many years. Briullov was to paint Giovanina Pacini again, this time in a large oil painting, 'The Rider', which now hangs in the State Tretyakov Gallery, Moscow.