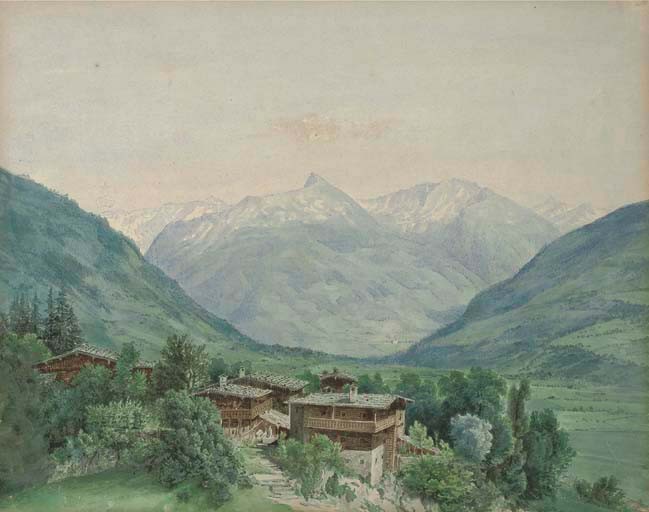 A panoramic view of the village of Hofgastein in the Salzburg Alps, with the peaks of the Hüttenkogel, Graukogel, Feuersangmassiv and Gamskarspitze seen beyond
black lead and watercolour, watermark crowned eagle
12 1/2 x 15 1/2 in. (318 x 396 mm.)

Professor Dr Helmut Börsch-Supan has confirmed the attribution to Karl Friedrich Schinkel in a letter dated 29 January 2005, having studied the original. Another watercolour of the same view is in the Kupferstichkabinett, Berlin (formerly in the Schinkel Museum, Berlin, SM VIII. 43; G. Riemann, 'Schinkel zeichnet im Salzburger Land; Sommerreisen nach Salzburg im 19. Jahrhundert' in Carolino Augusteum. Salzburger Museum für Kunst und Kulturgeschichte; Jahreschrift, Salzburg, XLIII/XLIV (1998), p. 137, fig. 26). In contrast to the watercolour in Berlin, which shows a topographically correct view of the village of Hofgastein, in the present drawing Schinkel has chosen a more idyllic motive by giving greater prominence to traditional architecture of the mountain region. The artist expressed his great love for this architecture in a letter to his brother-in-law Wilhelm Berger dated 15 July 1836, written on the visit to Hofgastein during which he made the present watercolour: 'Die Alpenhütte, sowohl die kleine unbedeutende als die zierlichste grosse Wohnung einer Patriziers eines kleinen Ortes, ist ein klassisches architectonisches Werk wie ein altgriechischer Tempel und gewiss war sie zu Perikles Zeit schon ganz ebenso gebaut. ('The chalets in the little villages, as much the humble ones as the elaborate residences of the patricians, are pieces of classical architecture much like an ancient Greek temple: they are still built in the same way as they have been since the time of Pericles.', quoted in G. Rieman, op. cit., p. 137). As an apostle of Classicism, Schinkel was generally more interested in the ideal rather than the observed elements of a subject, and so would often 'improve' the view when he came to make his representation of it.
The present drawing was executed when the Schinkel family visited Hofgastein in July 1836 to take the waters. Their sojourn in the mountains is recorded in twelve topographical drawings executed by Schinkel during his walks in the area, as recorded in the diary of his youngest daughter Elisabeth. The watercolours made during this visit are among the rare examples of Schinkel's desire simply to record his surroundings, since unusually for his works they are not related to any particular commission. The quality of execution of this watercolour reveals the dedication that Schinkel brought to the project.
This Panoramic view of the village of Hofgastein is a good example of Schinkel's habit of showing landscape views as if from above, a mastery of perspective reflecting his skills as an architect. The concept of taking an overview of the landscape is characteristic of Schinkel not only artistically but also philosophically, with his multiplicity of talents and ability to think in global terms. This is very much in keeping with the zeitgeist of the early 19th Century humanist movement epitomized by Wilhelm von Humboldt, Johann Gottlob Fichte and indeed Goethe.