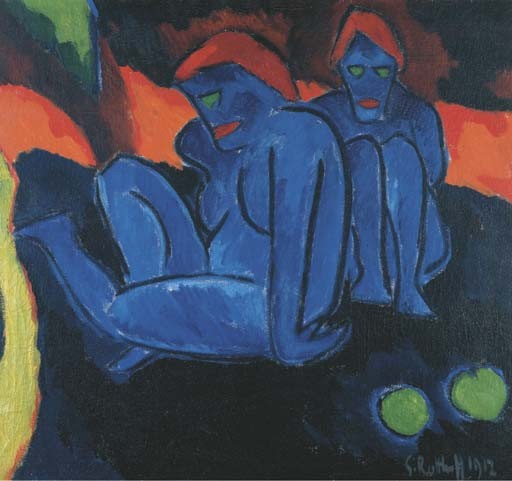 Dr Victor and Hedda Peters, Leipzig.
Dr F.W. Arntz, The Hague.
Acquired from the above by the father of the present owner in the 1960s.

THE PROPERTY OF A EUROPEAN COLLECTOR

'Concerning myself I know that I have no program, only the inner longing to grasp what I see and feel and to find its purest expression. At this point I only know that these are things I come close to through art, not intellectually nor by means of the word.' (Karl Schmidt- Rottluff 'Das Neue Programm: Antwort auf eine Rundfrage über künstlerische Programme', Kunst und Kunstler, vol XII, Berlin 1914, p. 308)

Painted in the summer of 1912 while Schmidt Rotluff was staying in Dangast on the North Sea coast, In der Dämmerung (In the Twilight) is one of the finest and purest pictorial expressions of his art. An exercise in contrasts, with its forms and colours deliberately pared down to an absolute minimum it is among the most raw and simple of all of Schmidt-Rotluff's paintings and as such also one of the finest examples of the principles of Brücke painting.

Among the founding principles of the art of Die Brücke was the aim that their art should be a direct and free expression of the inherent creative force that drives man's desire to create. 'We...want to create for ourselves freedom of life and of movement against the long established older forces. Everyone who reproduces that which drives him to creation with directness and authenticity belongs to us' Kirchner wrote in the Chronik der Brücke. Towards this end, infused by a romantic atavism that invoked primitive man's simple and direct relationship with nature and its forces, the Brücke artists sought a raw art, uncorrupted by the tutored finesse of modern 'civilization'. Championing the use of colour for its own sake and simple reductive form they had been particularly inspired by the revitalising example of artists like Gauguin and Van Gogh whose work, they recognised, had also invoked the mystery and primal force of nature as a vital and mystical power.

By 1912, most of the Brücke artists were living in Berlin. Life in Germany's great sprawling metropolis, brought about a change in much of their work. In his paintings made in the first part of the year, Schmidt-Rottluff had begun to experiment with Cubism, incorporating its straight lines and planar intersections into his art in a way that echoed the hard raw angular geometry of his woodcuts and of his later carved-wood sculpture. Despite producing some outstanding paintings, this 'Cubist' period was short-lived. In the summer of 1912, when Schmidt-Rottulff left for his annual visit to Dangast, the sharp angularity of these Cubist-inspired works almost completely disappeared though its reduction of form to its essentials bore fruit in the paintings he made that summer. Life in Dangast may well have precipitated the end of his brief flirtation with Cubism. From 1907 Schmidt-Rottluff had regularly spent his summers in this small port on the North Sea. His life there, as the art he produced in Dangast demonstrated, was one of a rural idyll and a pervasive theme of man integrated in nature permeates almost all the landscapes and portraits Schmidt-Rotluff made there. It was for him, his equivalent of the Moritzburg lakes where, Kirchner, Heckel and Pechstein had often gone to paint.

In der Dämmerung is one of the most powerful and striking of an outstanding group of paintings of nude figures in the landscape that Schmidt Rottluff painted in Dangast in the summer of 1912. As with the other Brücke artist's paintings at Moritzburg, a pervasive sense of the integration of figure and landscape underpins these works. This integration was symbolic of the symbiotic relationship that exists between man and nature and was celebrated and championed by the Brücke as a necessary healing ideal in the reform of modern culture. In a work such as In der Dämmerung Schmidt-Rottluff has gone further than all the other Brücke artists in reducing the basic pictorial elements to an extreme. Using solely flat planes of polarised colour articulated by simple black outlines, it is a technique, bordering on abstraction that perhaps grew out of the Cubist-inspired works of the spring, which Schmidt-Rottluff developed over the summer of 1912.

Depicting two naked figures reclining in the landscape at twilight, it is a prime example of the pared-down primitivism of the Brücke group's art. Like the murals with which Kirchner Pechstein and Müller decorated their studios in 1912, the formal simplicity of this work may well reflect the influence of the Palau beams at the Museum für Völkerkunde in Berlin - works of tribal Oceanic art that are well-known to have inspired many of the Brücke artists at this time. In their decoration of their studios with murals of naked bathers set like flowers of nature against a tranquil, exotic and simplified landscape Pechstein and Müller had drawn on the example of these beams as well as on the recent simplicity of Matisse's painting. While the subject matter of In der Dämmerung conjures visions of Gauguin's evocations of a pastoral idyll in Tahiti, it is more likely that the radical simplicity of Matisse's own faux-primitive paintings, Music and The Dance of 1909-10 also lay at the back of Schmidt-Rottluff's mind when he painted this work. Set at the hour of twilight when the colours of nature are at their most radiant and intense, the blues and reds of In der Dämmerung actually reverse the colours of Music. Though seemingly non-naturalistic, these two opposing colours - a rich vermillion red and a deep cobalt blue - combine to conjure a powerfully naturalistic atmosphere of two figures in the shadows of a warm summer's evening.

The simplest and most vibrant of the celebrated group of paintings of nudes in the landscape that Schmidt-Rottluff made during the summer of 1912, In der Dämmerung is the only one of this series not now housed in a museum. It was bought directly from the artist by Victor Peters and sold by Peter's widow in the early 1960s to the grandfather of the present owner. In 1971 a few years before his death Schmidt-Rottluff was shown a photograph of this painting. He had not seen the work for decades but immediately recognised himself as the figure seated to the right in the background. In 1989 In der Dämmerung was lent to the major Schmidt-Rottluff retrospective held at the Lenbachhaus in Munich where, of the 350 works on show, it was chosen for the exhibition poster.