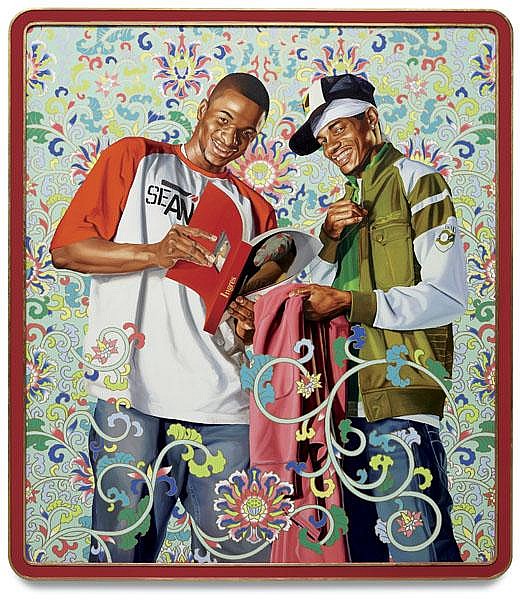 Support the Army and Look After the People
Signed and dated “Kehinde Wiley 07” on the reverse.


Oil on canvas in the artist’s wooden frame.

Kehinde Wiley transcends the boundaries between what is considered high culture and hip-hop culture, contemporary and traditional representation in the present lot, an important piece in his body of work Support the Army and Look After the People, 2007, from the artist’s series The World Stage: China.  Renowned for his compelling portraits of African American male youth in contemporary urban fashion positioned in the tradition of eighteenth and nineteenth century European painting, Wiley advances his oeuvre, bringing his subjects to the “World Stage” with projects in Brazil, Lagos-Dakar, and China.  The World Stage: China series evolved out of an invitation to take a studio in Beijing.  While working there, the artist took great inspiration from his environment, evident in his color choice, his elaborate patterning, and conceptually through his reference to historic propaganda posters from China’s Cultural Revolution.  Wiley found an interesting connection between the way the Chinese national identity was manipulated under Mao, with the way that African American identity is portrayed today.

For Wiley, the illustrations in the posters parallel worldwide generalizations of individuality wherein singular identities are lost or obliterated through prescribed group characterizations of different societies. […]The painting Support the Army and Look After the People bridges the gap between Wiley’s previous paintings and his new body of work.  Two young men occupy the picture plane: the man on the left holds an art book featuring the French Neoclassical painter Jean August Ingres, while the man on the right mends a hooded sweatshirt dangling from his hands.  This dissimilar pairing demonstrates the link between Wiley’s prior concerns and his new interests.  The reference to Ingres points to his fascination with Western art historical masters, while his highlighting of a cheerfully performed domestic skill exposes his reaction to the idyllic scenes central to the propaganda posters associated with the Chinese Cultural Revolution.  Wiley’s paintings, like the posters, encapsulate prevalent societal views of the moment; but also provide an alternate, more valid actuality.
J. Jankauskas, Kehinde Wiley, The World Stage: China, Sheboygan, 2007, p. 7

The vividly colored present lot references a propaganda poster designed by the Revolutionary Committee of Nanjing Textile Factory in 1976.  The original poster in traditional Chinese colors of red and gold, echoed in Wiley’s frame, shows a young army recruit reading from Mao’s red book while an older family member mends his army jacket.  In Kehinde Wiley’s painting, the Chinese figures are replaced by African American youth who the artist photographed in the United States, the army jacket is replaced by a “hoodie” the contemporary clothing staple, and Mao’s red book is replaced by a book on the nineteenth century French painter Jean Auguste Dominique Ingres.  Ingres, had a typical 19th century European fascination with “the Orient”, incorporating textile patterns into many of his works, much like Kehinde Wiley’s use of the Chinese inspired gorgeous floral motif that weaves itself behind and on top of his central subjects.  With the Ingres reference, Wiley rightly positions himself in the lineage of art history, while opening up that history to the world stage.