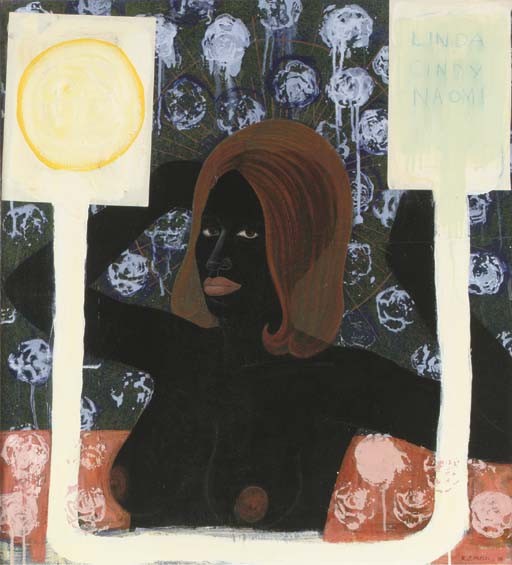 When visiting the Los Angeles County Museum of Art at an early age, the absence of the black figure in the works on display made a deep and lasting impression on the young Kerry James Marshall. As a result, throughout his career he has skilfully combined biographical, political and art histories in his work to tell the story of African-Americans and to create a meaningful context for the black figure within the mainstream of art. His powerful vignettes into the meaning of blackness in the modern society have made Marshall one of the most innovative and influential American artists of his generation.

Born in 1955 in Birmingham, Alabama, Kerry James Marshall spent his formative years in the racially tense and violent ghettos of a South Central Los Angeles embroiled in the Civil Rights Movement. It is therefore only natural that the subject matter of his paintings is drawn from African-American popular culture and is rooted in the geography of his upbringing. "You can't be born in Birmingham, Alabama, in 1955 and not feel like you've got some kind of social responsibility. You can't move to Watts (Los Angeles) in 1963 and grow up in South Central near the Black Panthers' headquarters and see the kinds of things I saw in my development years and not speak about it" (Kerry James Marshall, Deborah Smith in Converstation with Kerry James Marshall, exh. cat. Along The Way, Kerry James Marshall, London, 2005, p. 17). Working representationally, Marshall depicts black figures in contemporary landscapes and interiors. His insatiable curiosity allows him to appropriate a wide array of images ranging anywhere from ancient Egyptian pictography to American abstract expressionism. The powerful impact of Marshall's works is created by their majestic scale and the pure physicality of their painted surfaces.

"I've always wanted to be a history painter on a grand scale like Giotto and Gericault but the moment when that kind of painting was really possible seems so distant, especially after Pollock and Polke. Nevertheless, I persist, trying to construct meaningful pictures that solicit identification with, and reflection on Black existential realities." (Kerry James Marshall in a letter to Arthur Jafa in the summer of 1994.)

For the present work, Super Model (Female), Marshall depicts a nude Black female in three-quarter view from the waist up, a posture and style reminiscent of early Renaissance portraiture. In an appropriation of Byzantine iconography, a golden halo rayonates above the figure's head. Jackson Pollock's influence is evident in the gestural brushstrokes of the abstract background. In the upper left quadrant, he has drawn a sun-like golden ring. In the upper right quadrant, he was written in pencil, one below the other, the names 'Linda, Cindy, and Naomi,' referring to the world famous supermodels. The two tableaux are more than simply physically linked; they signify our society's obsession with celebrity and beauty. Linda, Cindy, and Naoimi have replaced the Madonna figure and become our modern day religious icons. Kerry James Marshall subtly subverts our culture of idolatry and idealism.