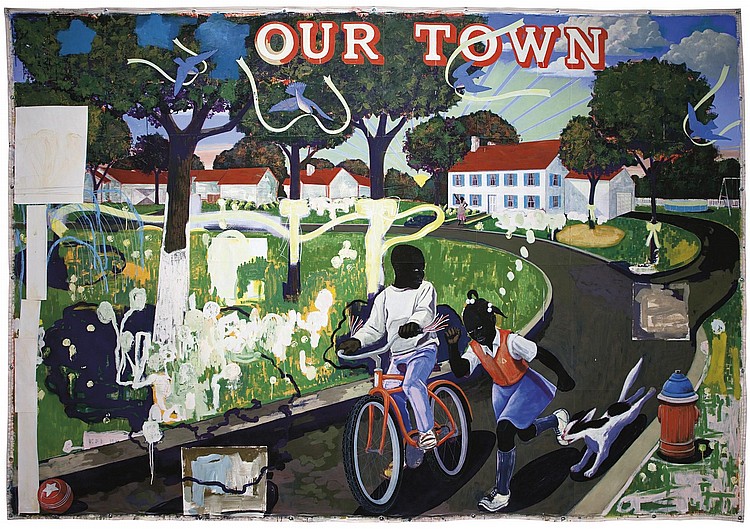 Jack Shainman Gallery, New York
Acquired from the above by the present owner, 2003

Kerry James Marshall's Our Town, executed in 1995, presents the viewer with what appears at first glance to be a joyous vision of an American suburban idyll. With Disneyesque bluebirds darting over sunny, tree-lined streets and clapboard colonial housing, this grand scale painting evokes a fantasy of happiness comparable to family sitcoms of the 1950s or Thornton Wilder's portrayal of the "average American family" in his 1938 "Our Town." Yet, in deliberate contrast to these stereotypically white-bread scenarios, Marshall places black protagonists at the center of the painting in order to address the existential experience of African-Americans and to create a meaningful context for the black figure within the mainstream of art.

Born in 1955 in Birmingham, Alabama, Marshall spent his formative years in South Central Los Angeles, which at that time was embroiled in the often-violent struggle of the Civil Rights Movement. It is against this backdrop that he began to shape his worldview, which naturally lead him to produce work that reflects the social and political reality of black Americans. "You can't be born in Birmingham, Alabama, in 1955 and not feel like you've got some kind of social responsibility" Marshall has explained, "You can't move to Watts [in Los Angeles] in 1963 and grow up in South Central near the Black Panthers' headquarters and see the kinds of things I saw in my developmental years and not speak about it" (K. J. Marshall and D. Smith in Conversation, quoted in Along The Way, Kerry James Marshall, exh. cat., London, 2005, p. 17).

Many of Marshall's paintings directly reference his youth and Our Town consciously induces nostalgia for the idealism of that era. An apron-clad housewife and children running through traffic-free streets with a classic cruiser bicycle recall the perceived perfection of the 1950's, especially the sanitized, overly-perfect characters of the Dick and Jane primers. The visual optimism of the image becomes ambiguous, however, when one considers the yellow ribbons adorning the trees, indicating the family is awaiting the return of a loved one or of military troops who are temporarily unable to come home. The surreal, abstract passages of overlaid paint and collage and the sullen, appraising glances of the children also work to subtly undermine this otherwise pristine celebration of suburbia, creating a complex and compelling image that is steeped in a sense of lost innocence.