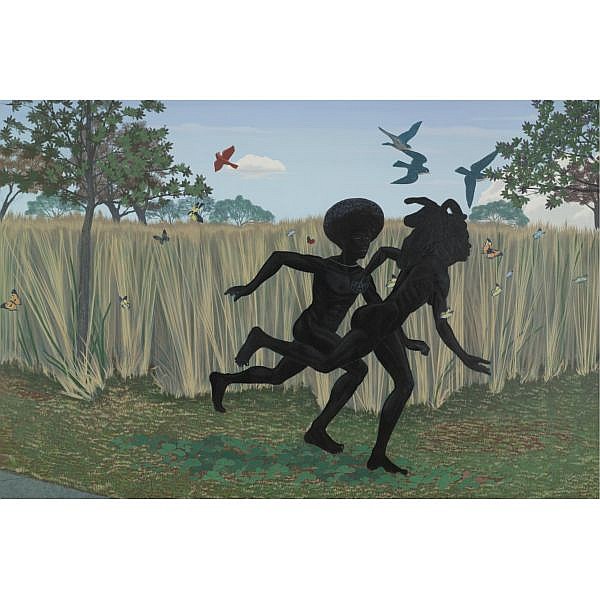 acrylic on fiberglass, in artist's frame

Jack Shainman Gallery, New York
Acquired by the present owner from the above

Executed in 2003.
PROPERTY FROM A PRIVATE AMERICAN COLLECTOR
Kerry James Marshall was born in Birmingham, Alabama in 1955 during the formative years of the Civil Rights Movement. He later learned that his hometown was known the world over for the hard and unyielding position that had been taken by the city fathers on keeping the city racially segregated at all cost and it stamped both his desire for freedom and his will to create art with a social message.

Marshall moved to Los Angeles in 1963; just ahead of the Watts riots, and he soon learned that people in LA were equally ambivalent about the matter of integration of the races and black upward mobility, particularly when it meant parity for the black community. Visually minded and always sensitively coherent about the omissions of black history from his otherwise classical western education, Marshall, upon entering the Otis Institute of Art in Los Angeles, found a way to address a number of these troubling issues through the study of art by making it. The act of painting provided him with a way of solving some of the problems of history while at once giving him a visual voice that particularized an Afrocentric way of seeing black people as human beings going about the joys of life uninhibited by white racism and the aftermaths of European and American slavery.

Marshall is a serious painter of social history; a history that references the African American experience. The iconography of his art is, by design, stylized to fittingly reflect and extend the accomplished artistry of pioneering African American artist who came before him such as Aaron Douglas, Jacob Lawrence, and Charles White among others. He emphasizes the omissions of art history by reminding the viewer that African American artists are most often treated invisibly in American art. Still, an overall presence of Marshall's own aesthetic approach to painting remains the most powerful thing about his work. Vignette is a painting that addresses the issues of race and history in America by using black subjects as symbols of black power.

But the work is with certainty more than an abbreviated visual statement about the subject of race. The visibility of a black couple, both nude, running through a peaceful contemporary landscape leaves the viewer guessing about their destination as well as their origin. But Marshall does not wish to have such questions interfere with the verve of the work since its visual impact is what he wishes us to see. In subtle ways, Marshall has made his black couple the prototype for a free society, perhaps a society in which one envisions seeing Adam and Eve running joyously unbound in the Garden of Eden, free and capable of living the good life. Birds and butterflies, acknowledged symbols of the flight to freedom in the work of some artist of color, such as South Africa's Peter Clarke and African American artist Walter Williams, glide by in this peaceful bucolic setting slightly reminiscent of what one sees in Henri Rousseau's magically painted landscapes where the bountiful spread of nature is unmistakably certain. The male figure's coiffure seems more like a halo than a signature element of the black cultural revolution of the 1960's, while the female leads their stride gliding along with dread locks decoratively reminiscent of Medusa's living head gear. The prairie land on which this romantic run through the edge of a field takes place can also be seen as a swift stride through life where there are no forms of oppression based on one's black skin color. It is a place where one envisions seeing the lamb lying down peacefully with the lion and where the brotherhood of humankind, without racial distinction, is the prize to be had at the end of the couple's journey. A carpet of shamrock cushions the ground beneath their feet as they run uninterruptedly beyond a world that is fraught with the social problems we associate with race in America.

Vignette, upon first glance, seems to be a simple slice of black visual history, perhaps two runaway slaves destined for the Underground Railroad rendered poetically to show blackness as a political statement in a romantic way. Yet it is much more than the above in that it forces the viewer to confront his and her own story in the context of the real meaning of race and politics in American society. Marshall does so with the full knowledge of the history of image making in nineteenth century America. Vignette highlights a subject that few artists, across the color line, attempt to deal with, and when it is done, none deals with it so poignantly head on as does Kerry James Marshall. David C. Driskell, October 2007