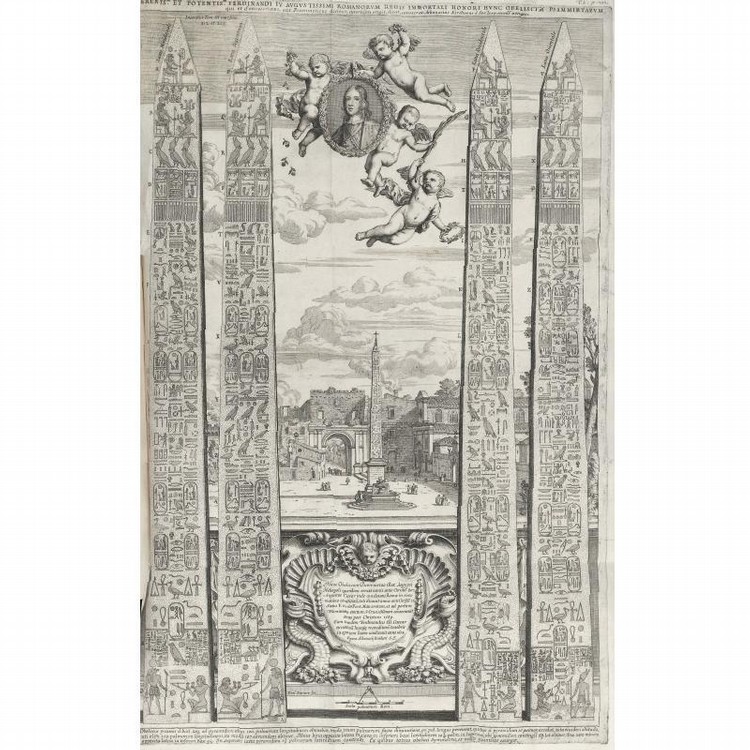 first edition. "No work by Kircher contributed more to his ambiguous legacy than the Oedipus Aegyptiacus, published in Rome between 1652 and 1655. Along with its companion volume, Obeliscus Pamphilius (Rome, 1650), it set forth Kircher's solution to the riddle of the hieroglyphs. These works presented "translations" of hieroglyphic inscriptions - utterly mistaken, as subsequent Egyptology revealed - and claimed to recover the lost "hieroglyphic doctrine" supposedly encoded by the enigmatic symbols. Kircher argued that the legendary Egyptian sage Hermes Trismegistus had invented hieroglyphic writing after the biblical flood to encode and preserve the pure wisdom of the antediluvian Patriarchs. But later Egyptian priests polluted the hermetic wisdom with magic and superstition, creating a mixed legacy, which was then transmitted to different civilizations. Kircher proposed to translate the hieroglyphs by comparing the Egyptian inscriptions with texts from far-flung traditions that he believed to contain the same teachings. To a great extent these were the esoteric traditions associated with Renaissance occult philosophy and Neoplatonism: the Chaldean Oracles, the Orphic verses, the Kabbalah, the Corpus Hermeticum, and so forth. But Kircher gave pride of place to Oriental sources and claimed that he had been able to crack the hieroglyphs because of his use of hitherto untapped sources in Near Eastern languages" (Daniel Stolzenberg, Egyptian Oedipus: Antiquarianism, Oriental Studies & Occult Philosophy in the Work of Athanasius Kircher (PhD Dissertation, Stanford University, 2004)).

There was a substantial number of works by Kircher in the Macclesfield library, (see Macclesfield Science I-O, 14 April 2005, lots 1150-1164, which are preceded by a note on Kircher's life and work).