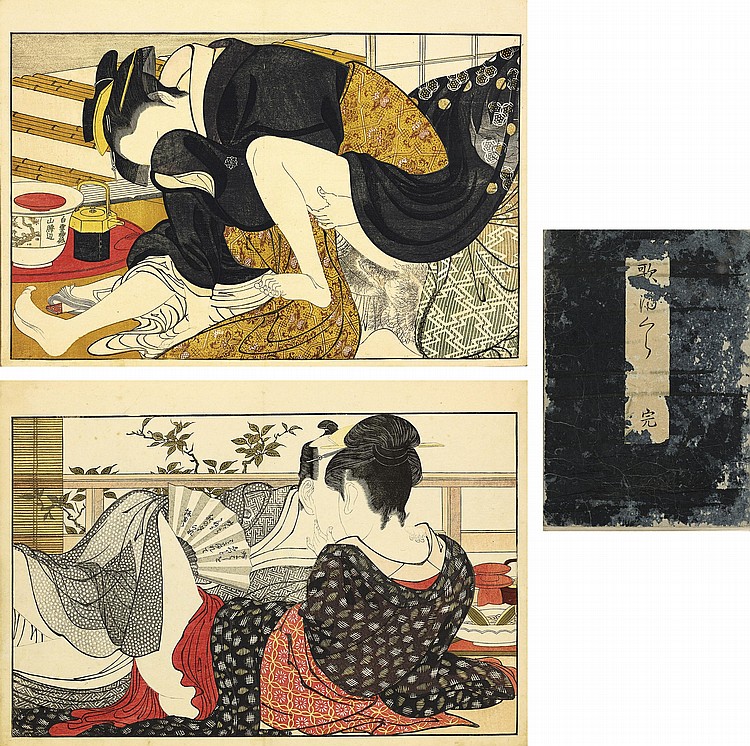 Illustrations:
1. Abalone diver raped by scaly river monster (kappa) as her companion looks on in horror and fascination

2. Woman discovering another woman's love letter hidden in the robe of her young lover

3. Lovers beside a standing lantern

4. Lovers in front of plum blossom and bamboo-decorated screen

5. Maid from a samurai mansion with her lover

6. Kept mistress with a young lover beside a chrysanthemum-decorated screen

7. Widow and her lover beside an open veranda

8. Lovers beneath a blossoming cherry tree

9. Young woman fighting off rape by a hairy older man

10. Lovers in the private second-floor room of a teahouse

The Utamakura is one of Utamaro's early masterpieces and includes twelve erotic scenes that range from tender to terrifying. As Richard Lane observed, Utamaro was not only the artist preeminent of the demimonde, but one of the greatest and most prolific artists of erotica in the long history of Japanese art. Jack Hillier called this book "The ne plus ultra in the genre. Every refinement that the block-cutters and printers could display was demanded of them. A red-brown outline for features and limbs was used instead of the customary black; intense attention was given to the sharpness of the details, whether of features, hair or dress patterns; an extremely wide range of pellucid colors was drawn on, with immaculate registry" (Hillier, The Art of the Japanese Book [London: Sotheby's Publications, 1987], vol. 1, p. 415).


Two of the images contain text. No. 9, the rape scene, includes the exchange: "Let go of me Rihei, you old fool!" and "Save your words and just keep still." No. 10, lovers entwined on the second floor of a teahouse, has a poem by Yadoya no Meshimori (1753-1830) inscribed on the man's fan: "Its beak caught firmly in the clamshell, the snipe cannot fly away of an autumn evening" (translations by Timothy Clark, in Asano Shugo and Timothy Clark, The Passionate Art of Kitagawa Utamaro, exh. cat. [London and Tokyo: British Museum Press and Asahi Shinbun, 1995], vol. 2, p. 279). Meshimori was a classical literature scholar and a leading light of kyoka (light verse) poetry circles of the day. The preface, thought to be written by the poet Torai Sanna (1744-1810), alludes to Sei Shonagon, the tenth-century court lady who wrote The Pillow Book (Makura no soshi).

The order in which the prints are mounted in the album offered here is the same as that of the British Museum volume. That set lacks the preface here and the sheets are trimmed. Another set is in the collection of the Victoria and Albert Museum. A third was sold in these Rooms, 17 March, 2009, lot 69. See also, Julia Meech and Jane Oliver, eds., Designed for Pleasure: The World of Edo Japan in Prints and Paintings, 1680--1860, exh. cat. (New York: Asia Society and Japanese Art Society of America in association with University of Washington Press, Seattle and London, 2008), pl. 87.