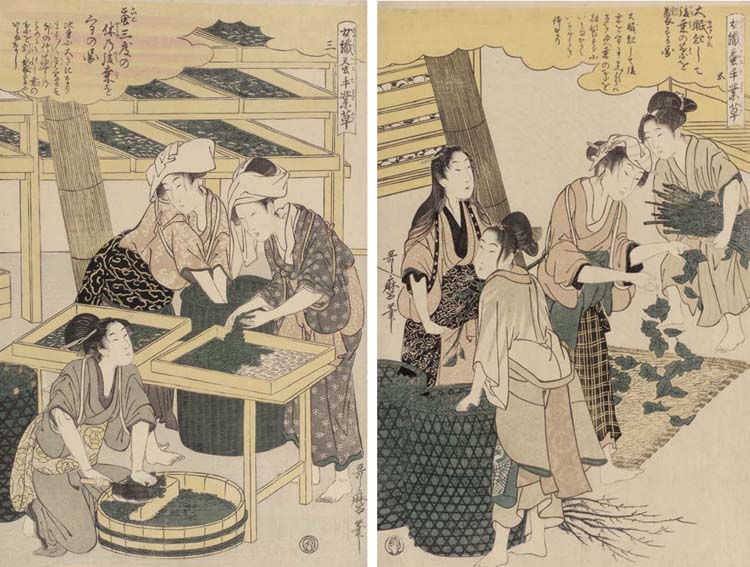 These are genre scenes showing the stages of sericulture, traditionally women's work. It is a series of twelve designs, each sheet individually numbered from one to twelve, which in fact form a complete twelve-sheet composition. According to Asano Shugo and Timothy Clark, who discuss this set in Kitagawa Utamaro/The Passionate Art of Kitagawa Utamaro (Tokyo and London: Asahi Shimbunsha and Trustees of the British Museum, 1995), p. 204, the color scheme emphasizes purple (and avoids red) in the so-called "purple picture" ( murasaki-e ) manner. The text, written within cloud-shaped borders at the top of each print, is taken verbatim from the series of twelve chuban prints designed by Katsukawa Shunsho and Kitao Shigemasa c. 1772, Kaiko yashinaigusa (Cultivation of silkworms) (see lot 3). The illustrations, on the other hand, are not copied so closely. Other impressions of the complete set are held in the Musées Royaux d'Art et d'Histoire, Bruxelles; The Art Institute of Chicago; Elvehjem Museum of Art, University of Wisconsin-Madison. The three prints that complete this set of twelve, nos. 7, 8 and 12, were sold in these Rooms, 22 March 2001, lot 20.