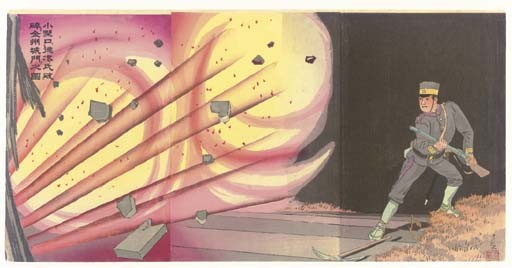 Japan and China fought the first Sino-Japanese War during 1894 and 1895, primarily over control of Korea. Although brief in duration, lasting from August 1894 until May 1895, the war galvanized the Japanese with patriotic fervor and a thirst for territorial expansion. A succession of quick and easy victories proved the clear-cut superiority of Japan's military forces. Woodblock-print artists, benefiting from an insatiable public demand for news from the front, did much to reinforce the ugly chauvinistic perception of China as backward and primitive, populated by a cowardly and ignoble species. Kobayashi Kiyochika produced more than 80 triptychs for the Sino-Japanese War.

The Japanese victory at Pyongyang in northern Korea on September 16, 1894 cleared the Chinese troops out of Korea and was followed by the important naval battle in the Yellow Sea (September 17), in which the Chinese suffered heavy losses. On October 26, the Japanese put down a pontoon bridge across the Yalu River and captured Jiuliancheng on the Chinese side of the river, an early victory in the Manchurian campaign. On November 21 they also captured Port Arthur by attacking from the landward side. Approaching Weihaiwei on the Shandong Peninsula, where the northern fleet of the Chinese navy was concentrated, the Japanese met fierce resistance at the strongly fortified Liu-kung Island. The town of Weihaiwei, however, was deserted by the Chinese and was occupied by the invaders on February 2, 1895. Intense cold, snow and ice numbed the Japanese troops. The Chinese admiral surrendered to the Japanese flagship, the Matsushima, on February 12th. Toward the end of March Japanese troops siezed the Pescadores Islands near Taiwan. The Treaty of Shimonoseki ending the war was signed on April 17, 1895. China recognized the independence of Korea, and ceded the Liaotung peninsula (modern Lianing Province), the islands of Taiwan and the Pescadores to Japan.

The outbreak of the Russo-Japanese War in 1904 once again raised the demand for triptychs, this time exploiting popular anti-Russian sentiment; Kiyochika's output in 1904 and 1905 included 18 triptychs and several sets of single-sheet comic prints. The war began on February 8, 1904, when the Japanese launched their surprise attack on the Russian fleet at Port Arthur and then landed troops to drive the Russians out of Korea, a humiliating defeat that assured Japan's position as a world power.