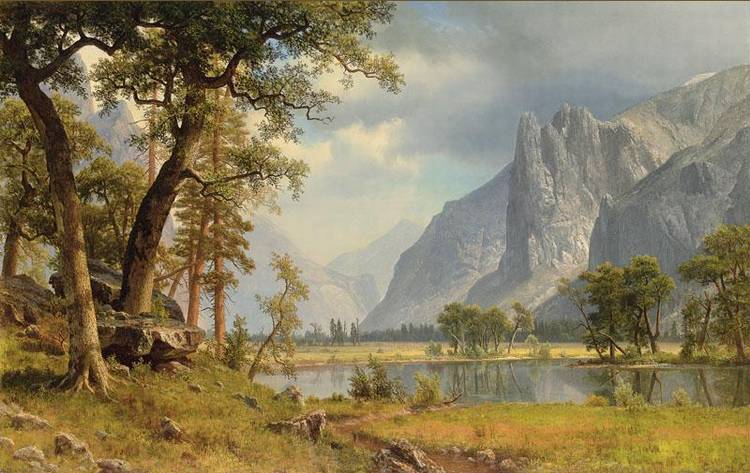 PROPERTY FROM THE COLLECTION OF JO ANN AND JULIAN GANZ, JR.

Albert Bierstadt's dramatic views of the majestic American landscape earned him broad popularity as one of America's most distinguished artists of the mid-19th Century. Bierstadt was overwhelmed by the natural splendor of the West and, beginning in 1859, he returned there many times, visiting the territories of Yosemite, the High Sierras and Yellowstone and finding inspiration in the magnificent views of the spectacular and unspoiled wilderness. While others had preceded him in the West, he was the first and probably the greatest American painter to fully capture the grandeur of this landscape and to record the many moods of its climate and terrain. The golden serenity of an Edenic vision of wilderness depicted in Yosemite Valley reflects both Bierstadt's ecstatic portrayal of the majestic scenery he encountered and his response to the nation's desire for renewal and a return to peace in the aftermath of the Civil War.

Bierstadt set out to record the American landscape focusing on the natural wonders of these largely unexplored and undocumented regions. His idealized interpretations of the West were in keeping with the image of the frontier held by many who would never travel there and his paintings were highly sought-after by patrons willing to pay record prices for his spectacular canvases. Edgar P. Richardson commented, "Bierstadt was one--and one of the best--of those who discovered the grandeur of the American West and made our nation aware of it" (Painting in America, New York, 1956, p. 230). According to Robert Hughes, "The West made America unique among nations, and nobody was painting big panoramas of it. Other artists with Luminist affiliations... had all been on painting expeditions west of the Missouri, but their paintings tended to be fairly small, without the heroics of Church?and Church's territory was the Hudson Valley and South America. They did not express the idea of a providential mission into the wilderness that was at the heart of Manifest Destiny. Bierstadt set out to do so" (American Visions, New York, 1997, p. 194). Bierstadt's reaction to his first view of the Yosemite Valley is recorded in a letter of August 3, 1863 to John Hay, "We are now here in the garden of Eden I call it. The most magnificent place I was ever in, and I employ every moment painting from nature" (Albert Bierstadt: Art & Enterprise, Brooklyn, New York, The Brooklyn Museum, 1991, p. 178).

Bierstadt's response to the visual spectacle and unspoiled landscape of Yosemite, which he recorded in letters and personal notes, is especially poignant given that the battle of Gettysburg had taken place only a month before and the conflicts of the Civil War continued in the East even as Bierstadt and his companions descended into the Yosemite valley. The War left many Americans distressed and questioning their traditional values. The West seemed to afford a reconnection with the antebellum era and an opportunity for renewal not unlike the promise of America to the first generation of settlers. Bierstadt's views of the Western territories provided an escape from the harsh realities of the recent national conflict and the ensuing bitterness of reconstruction. In Yosemite Valley, painted in 1866 after the war had ended, the morning sun suffuses the valley in golden light representing not only the dawning of a new day in the valley, but also the beginning of a new era of peace in post-war America. Bierstadt's deliberate and unusual exclusion of animals from the scene reinforces the deep sense of solitude felt by the viewer. The light-filled landscape is distilled to its most basic elements: earth, rock, water and sky; it is a landscape of absolute stillness and rugged purity. The large trees in the left foreground and the looming Sentinel rock on the right frame the valley and the river running into it. The composition gives the viewer the sense of having entered into hallowed ground, a sacred space where nature is all powerful.

In April 1863, Bierstadt embarked on an overland trip to the West accompanied by Fitz Hugh Ludlow, a New York writer who documented their journey. Ludlow's reports were subsequently published in a number of periodicals including the New York Evening Post and the Atlantic Monthly. According to Nancy K. Anderson, "Several factors may have influenced his decision, by early 1863, to travel west to the Pacific shore. Among the most intriguing of these was an exhibition in December 1862 at Goupil's gallery in New York of oversize photographs of California (including views of Yosemite Valley and the Big Trees) by Carleton Watkins (1829-1916). The Post published a glowing review of the 'unequaled' photographs: 'The views of lofty mountains, of gigantic trees, of falls of water which seem to descend from heights in the heavens and break into mists before reaching the ground, are indescribably unique and beautiful. Nothing in the way of landscape can be more impressive or picturesque'" (Albert Bierstadt: Art & Enterprise, p. 79; figures 1 & 2). Bierstadt and Ludlow had the opportunity to see Watkins' photographs again upon their arrival in San Francisco en route to the Yosemite Valley. In addition to encouraging the artist to visit Yosemite, the precision of Watkins' photographs surely influenced Bierstadt's sense of composition. Matthew Baigell notes the connection, describing Yosemite Valley as, "one of the artist's most harmoniously composed Yosemite scenes. The balances between forms and the continuities of movement (for example, from cliff profiles to tree trunks to reflections in the water) are studied more carefully than usual and point to the influence of Watkins. Even though Watkins, as a photographer, had less control over his subjects than a painter would have, he had the breathtaking ability to position his camera so that linkages between units and patterns of surface movement appear obvious and inevitable. He also attempted to restrict the number of forms and details in a scene, a characteristic that has a sympathetic echo in this work" (Albert Bierstadt, New York, 1988, p. 38).

Bierstadt and Ludlow finally arrived in Yosemite in July, with fellow artists Enoch Wood Perry and Virgil Williams who joined them from San Francisco. Though Bierstadt's initial response to Yosemite is not documented, Ludlow wrote of the first view into the valley from Inspiration Point, "That name [Inspiration Point] had appeared pedantic, but we found it only the spontaneous expression of our own feelings on the spot. We did not so much seem to be seeing from that crag of vision a new scene on the old familiar globe, as a new heaven and a new earth into which the creative spirit had just been breathed, I hesitate now, as I did then, at the attempt to give my vision utterance. Never were words so beggard for an abridged translation of any Scripture of Nature" (Albert Bierstadt: Art & Enterprise, p. 81). The connection between God and this magnificent landscape must have been strongly felt by the group at a time when the country was engaged in such dramatic strife. The interpretation of the divine spirit Bierstadt found in the mountain valleys of the western panorama characterized the monumental depictions of Yosemite he produced thereafter.

Bierstadt and his party spent seven weeks in the Yosemite Valley camping and sketching the surrounding scenery. Ludlow recorded the artists' activities, noting that they were up at dawn, and set to work shortly thereafter. "Sitting in their divine workshop, by a little after sunrise our artists began labor in that only method which can ever make a true painter or a living landscape, color-studies on the spot; and though I am not here to speak of the results, I will assert that during their seven weeks' camp in the Valley they learned more and gained greater material for future triumphs than they had gotten in all their lives before at the feet of the greatest masters. ... At evening, when the artists returned, half an hour was passed in a 'private view' of their day's studies" (Gordon Hendricks, Albert Bierstadt: Painter of the American West, New York, 1974, p. 132). Bierstadt returned to New York at the end of the year and by January of 1864 the sketches and objects he collected during the trip were on display in his studio (figure 3). The artist referred to these resources regularly as he elaborated upon the views he had sketched, expanding them into large, panoramic paintings (figure 4). "Repeating the practice he had initiated following his first trip west, Bierstadt filled his studio with sketches, photographs, Indian artifacts, and stuffed animal heads secured on his overland journey. Once again, the artfully arranged objects served as an effective backdrop for a remarkable succession of paintings that began to appear almost immediately upon his return" (Albert Bierstadt: Art & Enterprise, p. 83).

Stephen Edidin writes of the present painting, "This view of Yosemite Valley is taken from the north bank of the Merced River in the west end of the valley. In the middle distance are Sentinel Rock on the right, Royal Arches, Washington Column, and North Dome partially obscured. Bierstadt took certain liberties with the setting: what is probably Cloud's Rest in the center background is not located there in reality, and the two foreground trees are not the indigenous black oaks, but rather valley oaks" (An American Perspective: Nineteenth-Century Art from the collection of Jo Ann & Julian Ganz, Jr., Washington, D.C., National Gallery of Art, 1981, p. 114). Bierstadt's dramatic views of Yosemite and the surrounding territories fully capture the idyllic and contemplative nature of the western landscape. Ms. Anderson writes, "In Yosemite Valley... he found a landscape so spectacular, so unique in its grandeur, that he was able to offer what had been desired but not realistically expected: a national landscape for which there was no equivalent. In a letter published in the Post in October 1863, Ludlow hinted at what might be expected from Bierstadt's brush: 'Bierstadt,... after years spent in making alpine color-studies, asserts that no where in Switzerland, nor indeed throughout all Europe, is there scenery whose grandeur can for one moment be held comparable with that of the Sierra Nevada in the Yosemite district'" (Albert Bierstadt: Art & Enterprise, p. 85).

This painting will be included in Scott Ferris' forthcoming catalogue raisonné of the artist's work. We are grateful to Mr. Ferris for his assistance in cataloguing this lot.

This painting will be included in the catalogue raisonné currently being prepared by Richard V. West.