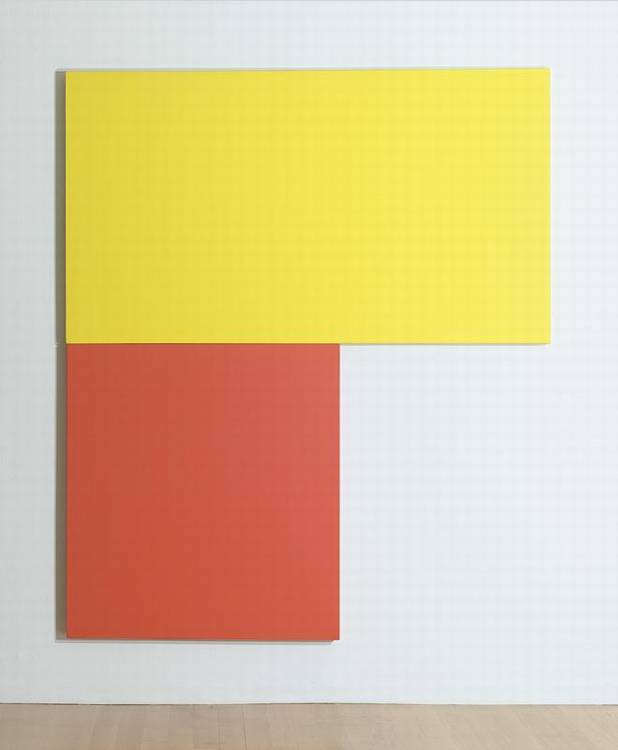 signed with the initials and dated 1971 on the overlap; numbered 464A Yellow and 464B Red respectively on the stretchers

oil on canvas, in two parts

Acquired by the present owner directly from the artist in 1971

Ellsworth Kelly is an artist whose art defies art history by refusing to be linked to any one particular group, movement or school. His ideas transcend traditional boundaries and explore the basis of all art and architecture from the ancient Egyptians, to the modernists of Europe, to his contemporaries in New York. Throughout his career, Kelly has been linked (albeit incorrectly) to Hard Edge painters, Op-Art painters and most often, Minimalist artists. Although he may share some of the same artistic tendencies, such as reductive form and monochromatic use of color, Kelly's use of these approaches to painting pre-dates them all. More appropriate is the fact that Kelly was heavily influenced by artists in Europe, such as Malevich, Mondrian and Arp. However, where these artists were concerned with the idea of creating space and form with color and composition, Kelly has his own ideas about color. Color, plane and shape, independent of form, provide their own reality - Kelly's own reality - in a visual vocabulary that has remained fresh, exciting and intriguing to the viewer for over five decades. As Diane Waldman remarks "Kelly combined his interests in ancient art and architecture with early twentieth-century Modernism to create a body of work that is a seamless blend of past and present, almost transcending time" (Diane Waldman "Ellsworth Kelly" in Exh. Cat., Ellsworth Kelly: A Retrospective, Solomon R. Guggenheim Museum, New York, 1996, p. 11).

Ellsworth Kelly was born in Newburgh, New York in 1923. He grew up taking art classes from a young age and after graduating high school, moved to Brooklyn to take classes at the Pratt Institute. During World War II, Kelly enlisted as a member of the 603rd Engineers Camouflage Battalion (composed mainly of artists) and was sent to France in 1944. His initial time in Paris was not long, but after his return to the States, and a short time at the School of the Museum of Fine Arts Boston, he returned to Paris to study at the Ecole des Beaux-Arts. While there, he attended class infrequently, instead preferring to roam the streets and museums soaking in the art and architecture (he was especially enthralled by the simple, compact shapes of the Romanesque style which can be seen as forms in paintings throughout his career). While in Paris during this time, Kelly visited many artists such as Picabia, Brancusi, and Mondrian. Most importantly, though, he became friendly with Jean Arp. Arp and his wife introduced Kelly to the idea of using collage, a monumentously important application for Kelly, although he would come to use this technique for very different reasons and a very different outcome. Kelly would later use multi-panel paintings, as a literal, anti-illusionist means of depicting space through the division of monochromatic surfaces. In 1954, Kelly moved back to the States, and took an apartment in New York, where he felt very much a foreigner. New York artists such as Robert Rauschenberg, Jasper Johns and Jackson Pollock were deep in the throes of action painting and Pop art. However, Kelly remained true to his original "reality" of color as form and continued to pursue his own, unique ideas. In 1968, Kelly started to experiment with the overall shape of his paintings, expanding beyond the traditional square or rectangle. Shortly thereafter, he would leave New York City, for the countryside of upstate New York.

Chatham XIII: Yellow Red is an extraordinary work of art aptly named for Kelly's studio in Chatham, New York where he moved in 1970. The Chatham series, a total of 14 paintings, all conform to the same inverted L-shape, where Kelly plays with the idea of color and shape implying 'weight' by joining panels of monochromatic canvas which differ in size. A horizontal rectangle is always placed on top of a vertical rectangle, which hangs below it to the left. Each Chatham painting is a variant on the above form, but is altered in its panel colors and dimension of each canvas. In this respect, the viewer begins to perceive that one or the other of the panels is either supporting the weight of the other, or putting weight on the other. In the present work, the smaller, bottom red panel (50 by 46 inches) appears to support the top yellow panel (46 by 81 1/2 inches) which is clearly larger. The squat, strong shape of the red canvas, as well as the perceived psychological strength of the color red, does indeed hold the lighter, happier yellow panel on top - even though the actual size of the yellow panel is much larger. The voided space of the wall on the lower right also plays a factor in the relationship between the proportions of shape, color and weight. It is no mistake that the width of the bottom panel is the same as the height of the top panel. Details such as this were well thought out by Kelly before putting paint to canvas. As Roberta Bernstein explains "In working out these relationships of color and shape, Kelly continued his practice, dating back to his early Paris period, of making collages from colored papers. Then, in pencil drawings, he established the exact measurements for each variation in a series, a necessary step for ordering stretchers but also a way for him to refine the proportions using a process that is intuitive rather than mathematical or systemic" (Roberta Bernstein "Multipanel Paintings" in Exh. Cat., Ellsworth Kelly: A Retrospective, Solomon R. Guggenheim Museum, New York, 1996, p. 48). The Chatham paintings are a culmination of many of Kelly's early ideas and later executions. The artist has addressed the canvas as a structured object, not an area of painterly gesture, with receding and advancing colors and shifting perceptions of weight.

With his self-imposed minimal artistic vocabulary, Kelly has succeeded in experimenting with perception without diluting what he considered to be the fundamental factors of artistic representation - color and form. Even with only two primary colors and two geometrically pure forms, Chatham XIII: Yellow Red succeeds in drawing the viewer in to question the very idea of what a painting is and can be. Kelly has once again defined the space without dominating it and has beautifully and uniquely created his own 'reality of color'.