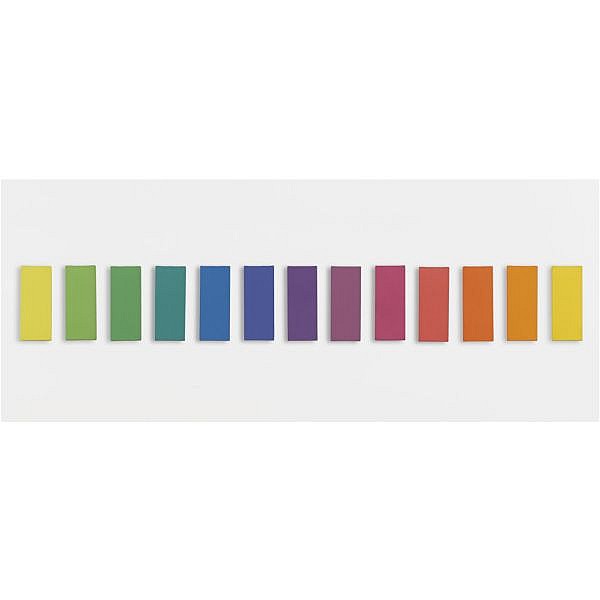 oil on canvas in thirteen parts

Henry Geldzahler, New York (acquired directly from the artist in 1969)
Stephen Mazoh & Co., Inc., New York
Acquired by the present owner from the above in 1987

Painted in 1969.
PROPERTY FROM A DISTINGUISHED PRIVATE COLLECTION
Ellsworth Kelly has long been regarded as today's preeminent abstract geometric painter. Known for his serene, eloquent canvases which stress line, edge, and plane with breathtaking economy of means, Kelly's use of color is equally paramount in his art and Spectrum VI is among the most important and encompassing statements on chromatic aesthetics by this artist. Kelly's Spectrum series spans from the first canvas in 1953 to collages in 1972, with the remaining 5 canvas paintings created from 1966 to 1969. This series of monochromatic vertical bands of color arranged in a horizontal row emerged from Isaac Newton's explanation of the spectrum and the relationship between light and color. From the colors produced by passing white light through a prism, Newton chose seven to define his spectrum, partly to harmonize the spectrum with the seven distinct notes of a musical scale. Therefore Kelly's work engages with an edited optical event which he then elaborates into his own individualized spectrum. Consisting of 13 bands of color, with the exception of the 1953 Spectrum I which comprises 14, Kelly's spectrum is not simply the Newtonian red, orange, yellow, green, blue, indigo, and violet. Yellow, the lightest color, is retained by Kelly in a state closest to Newton and the Spectrum works all begin and end with yellow. By chromatically bracketing his Spectrums, Kelly creates a continuum for the viewer within which he mixes his own palette. Moving progressively through the general range of the other Newtonian colors, shades of yellow-green, greenish-blue and so-on appear while some of the purer colors on the Newtonian scale such as red do not. When Spectrum II was exhibited at the Sidney Janis Gallery in 1967, Josef Albers asked Kelly how he arrived at his colors and Kelly affirmed that he did so intuitively. (Exh. Cat., New York, Mitchell-Innes & Nash, Ellsworth Kelly Spectrums, 1999, n.p.) Kelly's flat monochromatic shapes articulate a single field of color which in turn becomes form, abandoning the traditional use of color as representational. No longer depicting objects, Kelly's color now united figure and ground into one entity - a single shape wedded to a monochromatic field. Gottfried Boehm notes in his essay In-Between Spaces, "The decisive point in Kelly's development was reached when he abandoned the traditional dynamic of painting's organization, when form emancipated itself from its customary support, the ground, so that it could from then on lead an independent existence in the visual world." (Foundation Beyeler, Ellsworth Kelly, Basel, 2002, p. 33.) In Spectrum V and VI (Collection of the Metropolitan Museum of Art, New York), Kelly goes further and the new ground or support for the painting as object is the wall. The consistency in tonal range, thick saturation of color, and the physical separation of color forms in Spectrum VI create an exceptional defiance of the traditions of easel painting and an extraordinary work in the artist's oeuvre. Spectrum VI and the more monumental Spectrum V are the culmination of the series and important precursors to the next phase of the artist's career. Spectrum I was a composition on a single canvas (1953) and Kelly progressed to joined panels abutting each other in 1966-1967. In Spectrum V and Spectrum VI, the separation between panels and the relative proportions of panels are just as integral to Kelly's conception of the work as the interval spaces in Donald Judd's famous Stacks. Early in his career Kelly notes, "In October of 1949 at the Museum of Modern Art in Paris I noticed the large windows between the paintings interested me more than the art exhibited... Everywhere I looked, everything I saw became something to be made, and it had to be made exactly as it was, with nothing added. It was a new freedom:...'' (Exh. Cat., New York, Matthew Marks, Ellsworth Kelly: Matrix, 2003, p. 8). In the late 1960s and 1970s Kelly further engaged the wall as a support, releasing his color forms from the confines of the traditional square or rectangle. Color panels became unevenly aligned, introducing a new element of tension as they balance atop one another or jut from each other at different angles creating the implication of bending outward. In the catalogue for the Mitchell-Innes & Nash Ellsworth Kelly: Spectrums show, David Batchelor thoughtfully comments, "perhaps [the Spectrums] were a way of testing [Kelly's] visual acuity against a known standard. Perhaps they are a way of registering how unknown and uncertain that standard really is. ....The spectrum, like the painting, is both quite real and quite abstract." (Mitchell-Innes & Nash, op. cit. p. 9)