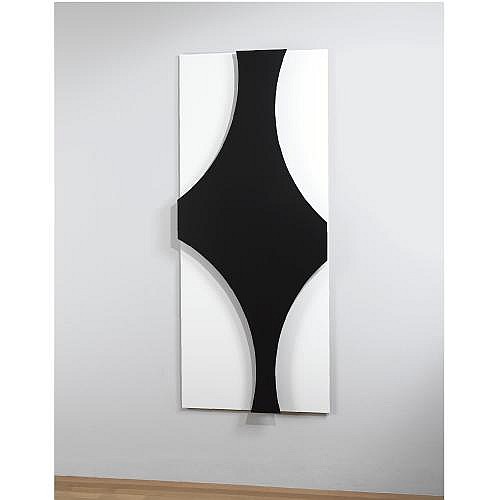 Executed in 1959, this sculpture is unique.


Whether in his monochromatic canvases or his sculptural work, Ellsworth Kelly investigates art as object. The artist's famous monolithic colored canvases were "shapes" of color, progressing from compositions of geometric color forms balanced within the frame to shaped canvases and multi-panel paintings that defied the traditions of easel painting. Kelly instead directly addressed the nature of the painted canvas as aesthetic object with spatial interrelationships between the art and the wall, as well as the art and the viewer. Black Venus from 1959 stands at the beginning of Kelly's related explorations into three-dimensional form.

As noted in the catalogue for the 1982 retrospective of Kelly's sculpture curated by Patterson Sims and Emily Rauh Pulitzer, "Black Venus accomplishes Kelly's goal of moving painting into three dimensions and having each color occupy its own plane or panel. Raised about three inches off the white surface, which in turn is installed one inch from the wall, the black element cannot recede. Its shadows create a gray area of transition between the work's two levels." (Exh. Cat., New York, Whitney Museum of American Art, Ellsworth Kelly: Sculpture, 1982, p. 71). In the previous year of 1958, Kelly made a series of 7 small wood reliefs, layering a curvilinear shape onto a larger rectangle, with no color or tonal variations. His first metal sculpture, Black Venus is a dramatic leap forward in formal innovation within Kelly's oeuvre, and the first of 14 metal sculptures (wall-mounted and free-standing) that would establish Kelly as a sculptor of note. The three-dimensional depth between the panels is graphically heightened by the sublime contrast between black and white - the motif of positive versus negative and solid versus void that is prevalent in the artistÂ?s work.