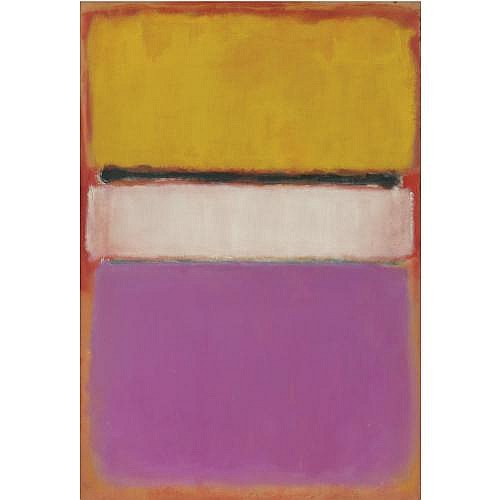 signed and dated 1950 on the reverse oil on canvas

PROPERTY FROM THE COLLECTION OF DAVID AND PEGGY ROCKEFELLER

White Center dates from an annus mirabilis in Mark Rothko's long career-the crucial moment of 1950-when the artist finally established the signature style which continued, with many refinements, until his death in 1970. One of the largest canvases out of the sixteen Rothko painted during that key year, it was also among the most fully resolved (for example, the even bigger No.5 in the Museum of Modern Art, New York, still retains calligraphic markings which evoke an earlier phase). Certainly, White Center's dazzling amplitude and finesse invite an otherwise overused label-the appellation of masterpiece. In short, its commanding scale, sumptuousness and sheer intensity bespeak a modern master in the first full flush of his mature creativity. As such, White Center is also a summation.

In hindsight, Rothko's indelibly recognizable format-one or more rectangular presences hovering upon or within a field-may suggest some foregone conclusion, the logical outcome of his studied progress towards abstraction. Yet in fact Rothko only crystallized his "classic" image at mid-century after a pictorial quest beginning as far back as 1924. Through the 1930s the artist explored various representational idioms until, as he later recalled, "whoever used it [the figure] mutilated it. No one could paint the figure as it was and feel that he could produce something that could express the world. I refuse to mutilate and had to find another way of expression." ('Address to Pratt Institute, November [sic] 1958', in Miguel LÃ³pez-Remiro, Writings on Art: Mark Rothko, New Haven & London, 2006, p. 126). Consequently, from around 1940 onwards Rothko (whose output seemingly entered a new phase with the advent of each fresh decade) delved into themes from Greek mythology-allied to an increasingly imaginative biomorphic vocabulary that drew from MirÃ³, Picasso, Dali and other surrealists-until in 1947 he reduced the figurative remnants to brightly tinted patchworks. In such so-called "multiform" canvases of the late 1940s the irregular shapes float, coalesce and disintegrate as though possessed of inner life. As Rothko wrote at the time, "I think of my pictures as dramas; the shapes in the pictures are the performers... They are organisms with volition and a passion for self-assertion." ('The Romantics Were Prompted', 1947, in LÃ³pez-Remiro, p. 58). The last batch of these "multiforms" was exhibited in Rothko's fourth successive annual show at the Betty Parsons Gallery in January 1950. By then, however, his vision had left behind even those compositions to ponder what he called "an unknown space".

With White Center Rothko breathed a palimpsest of hues into this spatial terra incognita, seeking to convey what he avowed were "basic human emotions-tragedy, ecstasy, doom, and so on" (Selden Rodman, Conversations with Artists, New York, 1957, p. 94). That color might, first and foremost, carry the brunt of expression is an insight Rothko doubtless had seen confirmed by two European painters whom he admired, Bonnard and Matisse.

Firstly, Rothko can hardly have missed Bonnard's memorial show in 1948 at the Museum of Modern Art. There, he would have beheld both the dappled quality that distinguished Bonnard's painterly touch as well as his high-keyed palette rich with orange, vermillion, violet and lilac. Such exotic tones return in White Center's chromatic scheme. As for Matisse, Rothko commemorated his death in another climactic work four years hence, the tellingly titled Homage to Matisse. Perhaps only certain Matisses, too, such as The Dream (1939-40, private collection), foretell the specific gamut of White Center: namely, gold, red and lilac in tension with white and black. (Rothko could well have seen The Dream when it traveled to the United States in 1948 for the Matisse retrospective at the Philadelphia Museum of Art). Lastly, the stern rectangular ordonnance holding this luxuriance in check may cast a backward glance to Mondrian. Antithetical as the Dutch painter's strict neo-plastic principles might look to Rothko's often effusive sensibility, a surprising connection exists between the two. Witness Rothko's observation: "Sensuous? He [Mondrian] was the most lascivious of painters, licking all those brushstrokes on the canvas" (Rothko quoted in Virginia Pitts Rembert, Mondrian, America and American Painting, Ph.D. diss., Columbia University, 1970). Since Rothko saw "sensuality" as "the basis of being concrete about the world" and "tension" as "curbed desire", the mingled severity (of design) and sensuousness (of color) in White Center mark a synthesis, the fused opposites in a dialectic that extended to his earliest years.

"Dialectic" aptly describes the contest between figure and ambience, sentience and space, that preoccupied Rothko from his first endeavors onwards. His early protagonists often faced enigmatic voids and, sometimes, their proportions grew to fill their surroundings. The rationale for this curious interaction lay in one of Rothko's most fundamental tenets. It was the belief, as he wrote, that "since there are no gods, man must measure himself" ('Fair Composition' notebook, n.d.). With his turn into full-fledged abstraction, Rothko took the idea of projecting human measure or consciousness into space - a concept akin to the well-known nineteenth-century notion of empathy or EinfÃ¼hlung, literally "feeling in" - to its acutest conclusion.

On the one hand, the effaced expanses of White Center summon distant associations with the hypnotic blankness that Romanticism had eulogized. Here we may recollect such precedents as, say, J.M.W. Turner's field-like emptiness ("that chap Turner learnt a lot from me," quipped Rothko after visiting a show of the Englishman's work in 1966), the poet StÃ©phane MallarmÃ©'s linkage of the whiteness of the blank page with the empty azure of the sky and even Lewis Carroll's "The Hunting of the Snark" (1876), which included a mock-epic paean to the void:

"Other maps are such shapes, with their islands and capes!
But we have our brave captain to thank"
(So the crew would protest) "that he's bought us the best -
A perfect and absolute blank!"

Indeed, Rothko even owned a copy of this poem.

On the other hand, Rothko's mission was not merely to foreground the sheer strangeness of space - a medium that ubiquitously encompasses us yet which in its immateriality also eludes the grasp - but also to humanize it. The space that White Center projects, therefore, mixes the material and the metaphysical. Why else should Rothko have once stated that he "wanted to paint both the finite and the infinite"? (Dore Ashton, About Rothko, New York, 1983, p. 179). Floating like a mirage before our eyes in its vaporous geometry, this imageless icon also has a gripping immediacy.

On a physical plane, the impact of White Center inheres in the complexity that underlies its ostensible simplicity. At first glance, the unwary viewer might discern little more than a mere four shapes arrayed upon a ground. Look closer, though, and everything becomes changeful, nuanced and contrapuntal - like a fugue of feelings translated into colors. Thus, Rothko rubbed down the orange ground in the lower sections so that there it almost evaporates before the gaze. Yet when we look towards the top half of the composition, this selfsame "ground" has modulated into a blood red aura advancing around the white, black and crowning orange rectangle. Likewise, the even application of the lowermost rectangle counterpoints the hazier, mottled surfaces of those above it. The apparent lateral symmetry, too, is deceptive: notice how the white ends at its right in staccato vertical dabs whereas its leftward edge splays out and slightly downwards. The shadowy black band also seems to reemerge beneath the white as a horizontal turquoise strip - a premonitory whisper amid the loudest chords of light. Throughout, more is sensed in this glowing faÃ§ade than even what is seen outright. So White Center evolves slowly over time, meeting our presence with its haunting absences, a sentinel with a shimmer. Coming from an artist who famously noted that "silence is so accurate", White Center voices the eloquence of unspoken speech. And if words had to be found for its visual music (albeit with the proviso that Rothko always looked inward rather than to nature), they might well be Walt Whitman's memorable lines in "A Prairie Sunset" (1888):

The Light, the general air posses'd by them - colors till now unknown...
Pure luminous color fighting the silent shadows to the last.

Fittingly, White Center has a history that matches its quality. Briefly owned by Eliza Bliss Parkinson (the niece of Lillie P. Bliss, one of the founders of the Museum of Modern Art), White Center then passed - on the advice of Dorothy C. Miller, one of the foremost curators of her era - to David Rockefeller, becoming the first abstract work of art to belong to this most illustrious of collectors. 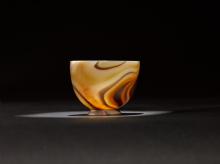 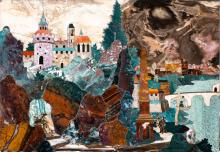 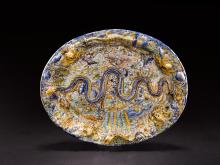