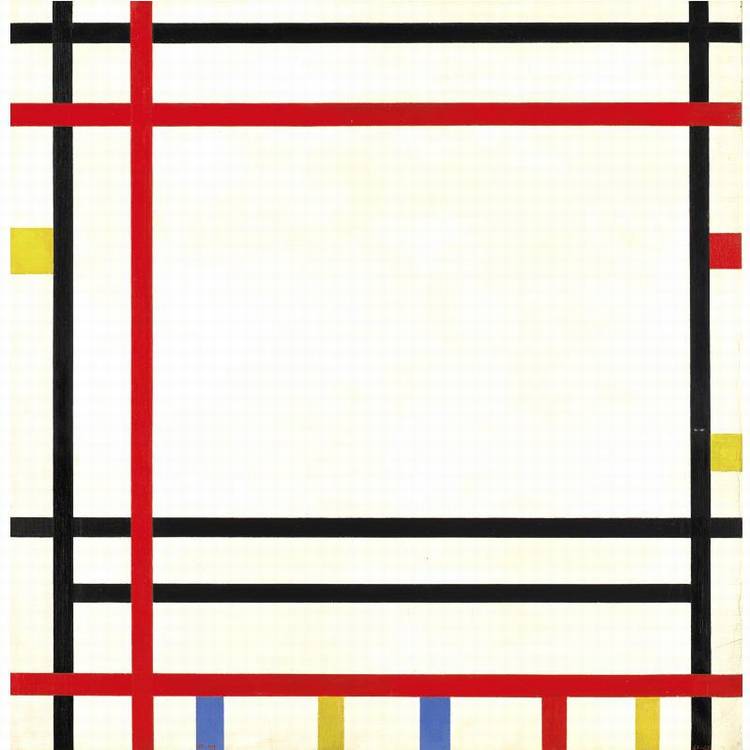 PROPERTY FROM THE COLLECTION OF HESTER DIAMOND

"For Men of the City, the city must be sublimated in the painting - the whole [of] city life must reflect in it." Mondrian wrote these words while he was living in New York in 1942, around the same time that he completed this striking composition. The present picture brilliantly exemplifies this statement, as it embodies the dynamic energy and structural sophistication of the modern metropolis (see fig. 1). During the years that Mondrian lived in New York (1940-1944), he began only six new paintings and completed only three of them: New York/ Boogie Woogie, 1941-42 (the present work); New York City, 1942 (Musée National d'Art Moderne, Centre Georges Pompidou, Paris, see fig. 2), New York City 1 (incomplete; Kunstsammlung Nordrhein-Westfalen, Düsseldorf); New York City 2 (incomplete, Private Collection); Broadway Boogie Woogie, 1942-43 (The Museum of Modern Art, New York, see fig. 3), and Victory Boogie Woogie, 1942-44 (incomplete, Gemeentemuseum, The Hague, see fig. 4). Other pictures that he worked on during these years were compositions that he had begun in Paris or London and brought with him when he immigrated to the United States in October 1940. Unlike his earlier canvases, these later paintings were inspired, from start to finish, by the sights and sounds of New York City. Mondrian was enraptured by the lure of Manhattan, its urban landscape unlike anything he had ever experienced in Europe. The linearity of the skyline and the grid of its streets created an environment that seemed to be a living example of Mondrian's theories of Neo-Plasticism that he promoted in the 1920s and 1930s, and the neon signs of Times Square and the pulsing rhythm of New York jazz enlivened the spirit of his paintings during these years. Working in New York until his death in 1944, Mondrian produced canvases that demonstrated a fresher and more developed application of his original aesthetic. These paintings are considered the most innovative works of his career and ultimately came to define urban modernism in the 20th century. New York/ Boogie Woogie, which is the first canvas that he started and finished in New York and the first of his legendary Boogie-Woogie series, led this revolution of style.

Mondrian began this picture at the beginning of 1941 and continued working on it intermittently until 1942. It was not uncommon for him to work in stages on his compositions, sometimes calling a work finished and then returning to it at a later date to add structural elements. In the beginning of 1941, Mondrian exhibited the present work, then titled New York and only composed of black lines, at the Riverside Museum. When New York went unsold at that exhibition, he decided to revise the composition over the course of the next year. His friend, Carl Holty, described what happened: "...He had one picture that was shown at the Riverside Museum in one of the abstract artist shows. And it had a hollow center, a white rectangle, there were two sets of bars around it. And, oh, my, this was the last word. Well, nothing happened. It didn't get sold. It came back to the studio. I came there one day, and I noticed that he had cut this plane down with another plane. And I said, 'What happened here, Piet?' And he looked at me as though it was my fault and said, 'It was empty as hell. Anybody could see that.' So this was intermediate, the introduction of these small planes that sort of framed the hollow center, you know, the old Oriental idea of bringing the empty space to light by what you do around it had already hit him" (reprinted in Joop M. Joosten, Piet Mondrian, Catalogue Raisonné of the Work of 1911-1944, Toronto, 1998, p. 403).

Photographs from October 1941 feature the artist at his studio on 56th Street with this picture before he completely finished his revisions (see figs. 5 & 6), the point in the history of the picture now referred to as the "first state." By now, Mondrian had added three red lines - two horizontals at the top and bottom, and one vertical intersecting them on the left edge. The composition was later enhanced with the yellow, blue and red color bars along the edges, and the finished work made its debut in this "second" state when it was exhibited at the Valentine-Dudensing Gallery in 1942. This painting, which was re-titled Boogie-Woogie for the exhibition, finally sold in March to Mary E. Johnston of Cincinnati, who had visited the Valentine-Dudensing Gallery with Mondrian's friend, Charmion von Wiegand. In his correspondence to von Wiegand after the sale, Mondrian expressed his disappointment about receiving only $400 for the picture, but seemed pleased that "the Boogie-Woogie was sold" (quoted in Yve-Alain Bois, Angelica Z. Rudenstine, Joop Joosten, Hans Janssen, Piet Mondrian (exhibition catalogue), New York, 1995, illustrated p. 289).

"Boogie Woogie" refers to the improvisational, syncopated piano music that originated among African-American musicians and became popular in New York jazz clubs during World War II. On his first night in New York City, Mondrian heard this music, and, as he later remarked to Sidney Janis, he decided to "put a little 'boogie woogie' into his pictures." These resulting pictures, with their flashes of color and the rhythmic arrangement of lines, became known as Mondrian's Boogie Woogie paintings, and the present work is the pioneer of this now iconic series.

The history of the painting accounts for its dual title, New York/ Boogie Woogie, and the recently published catalogue raisonné on the artist has titled this work accordingly. Several Mondrian historians, such as E.A. Carmean Jr., continued to refer to this work as New York due to the original title written on the stretcher. Carmean writes, "A painting which well typifies Mondrian's style soon after his arrival in Manhattan is the appropriately entitled New York. This large, nearly square canvas is constructed around a central rectangle... Around the perimeter of the work on three sides are the freely positioned unbordered color elements in red, yellow and blue which were developed at this time. Inserted between structure and frame they give a new staccato pace to the composition, while also acting as a secondary border. Significantly, Mondrian does not use here any of the large color areas from his earlier paintings; rather color is now kept at the approximate scale of the linear structure which it supplements and supports. The greatest change in New York is in this structure itself, for in the composition Mondrian reintroduces colored lines; in New York we find continuous red lines as well as black. Inflection of the pictorial surface which had previously been the result of double (or triple) black lines is now caused directly by a colored structure" (E.A. Carmean, Jr., Mondrian: The Diamond Compositions (exhibition catalogue), National Gallery of Art, Washington, D.C., 1979, pp. 57-58).

After Mondrian escaped war-torn Europe and moved to New York, he found himself in the center of a metropolis that was thriving with creative talent. Other artist émigrés, such as Marcel Duchamp, Fernand Léger, and André Breton were now all living in New York, and their presence in the city marked the beginning of the transatlantic shift of the avant-garde that would redefine the city as the artistic capital of the world for the next several decades. A significant factor in New York's emergence as a cultural capital was the influence and reception of Mondrian's pictures among young artists. Carmean tells us that, "In spite of the difficulties caused by the war, Mondrian appears to have been happy in New York, perhaps more so than at any time in his life. In addition to his friendship with Harry Holtzman - who had helped him escape to America - Mondrian became the colleague of several other, younger abstract painters, such as Charmion von Wiegand, Fritz Glarner and Carl Holty. New York was host to many major European artists at the time - Ernst, Léger, and Masson for example - and Mondrian was regarded by the younger American artists as equal in stature to these masters (recognition that he did not have in Paris). There was considerable interest in his work; two one-man exhibitions were held at the Valentine Dudensing Gallery in 1942 and 1943 respectively and he was able to write and publish new essays" (ibid.).

The paintings that Mondrian executed in New York were much more intricately designed, colorful, and optically engaging than his earlier works. One of the notable innovations of these pictures is the artist's use of tape, which he applied directly to his canvases and then painted over in oil. The technique was employed to its greatest extent in Mondrian's last picture, Victory Boogie Woogie, which remained incomplete at the artist's death in 1944 (see fig. 7). These pictures, however, expand on the Neo-Plastic theories that Mondrian had first developed in the 1920s, when he called for simplifying art to the point of pure abstraction. With his paintings, composed of harmonious intersections of lines and pure planes, Mondrian attempted to "complement society not as propaganda or as applied art but by its plastic expression alone. To understand this, it is necessary to know what this pure art involved, to know that it is a genuine and living expression of the universal equilibrium" (Harry Holtzman and Martin D. James, eds., The New Art - The New Life: The Collected Writings of Piet Mondrian, Boston, 1986, p. 278). As the first painting that he began in the United States and one of only three that he actually finished, New York/ Boogie Woogie is an outstanding New World manifestation of Mondrian's career-long artistic pursuit.

Fig. 7, The artist's 15 East 59th Street studio after his death in 1944. Victory Boogie Woogie, which remained unfinished, sits on the easel on the right