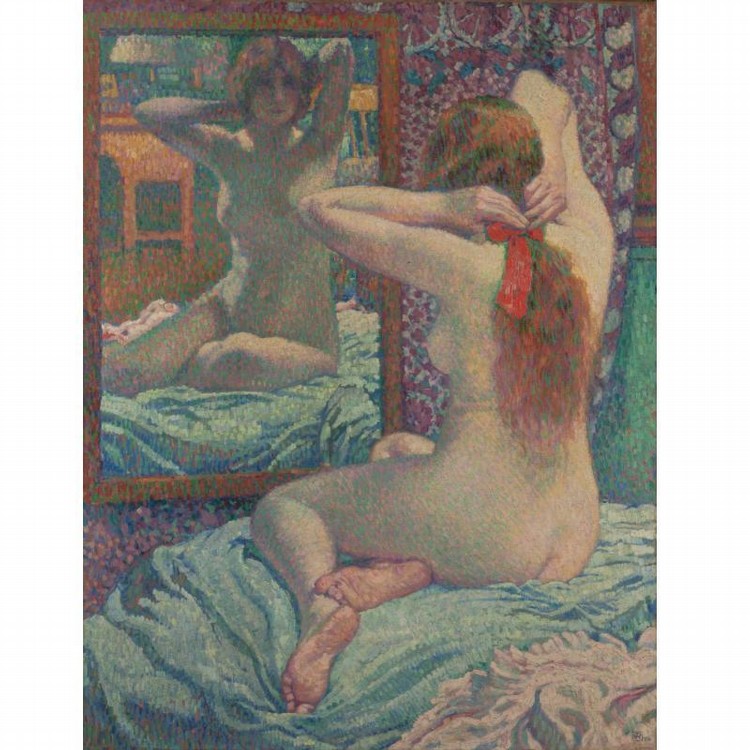 PROPERTY FROM THE COLLECTION OF CHARLES AND ROSE WOHLSTETTER

Signed with the monogram and dated VR 06 (lower right)

Dr. R. Hamet, Paris (possibly by descent from the above)

Hammer Gallery, New York (acquired from the above 1983)

Mr. Christopher Stenger, Chicago (acquired from the above 1984)

Hammer Gallery, New York (acquired from the above)

The captivating Le ruban écarlate is one from a select group of nudes that van Rysselberghe completed between 1905 and 1906, and it is by far the most spectacular of them all. The picture dates from the height of the artist's international celebrity, and was completed shortly before the opening in February 1906 of the Berlin Sezession exhibition, where it was exhibited for the first time. Earlier that month, Van Rysselberghe also completed a larger sanguine drawing of the same composition. The spectacularly finished and vivid quality of both the drawing and the present oil evidence the apparent pleasure the artist must have had in depicting this intimate scene.

The image of a nude before a mirror has many precedents in the history of art, and the present composition is a continuation of this theme at the dawning of the 20th century. Van Rysselberghe's model at her toilette recalls several of Degas' sensual bathers from the Impressionist era, as well as renditions by the Old Masters, including the great Rokeby Venus by Diego Velázquez. Van Rysselberghe's nude, however, has been reinterpreted for a modern audience and incorporates a stylistic realism that is influenced by photography. This picture also shows the development of the Pointillist technique that van Rysselberghe perfected in the late 1890s. As opposed to those earlier compositions, which usually depicted seascapes or harbor scenes, the brushwork in the present painting is tighter and more emphatically linear. The Pointillist or Divisionist aspects of the painting are largely utilized in the background in order to create the illusion of depth and dissolution. This effect is most noticeable when considering the two images of the model, who appears much more solidly formed in the flesh than in her distant reflection.