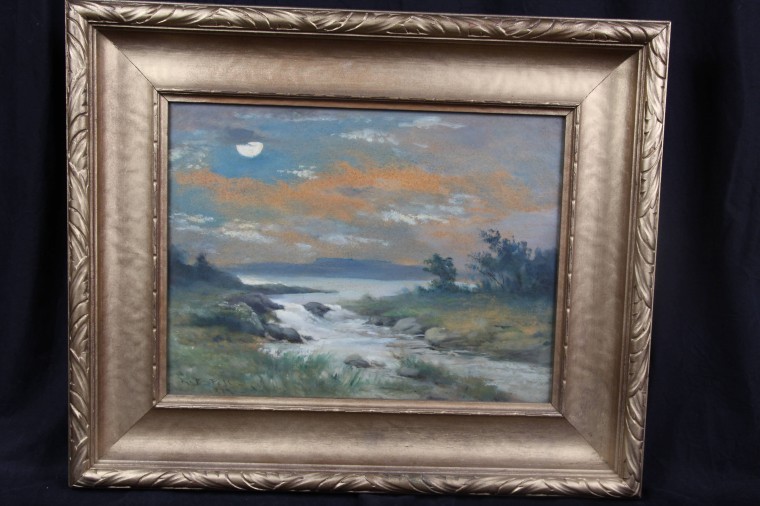 This is a very rare Original Oil on Artist Board by well listed American Artist Ella Ferris Pell (1846-1922). Signed and dated 1917 by the artist, in the original period frame and depicting a view of the Hudson River. The faded label on the back of the frame reads The Chatterton Shop, 175 Main Street, Fishkill on Hudson, NY. Painter, sculptor and illustrator Ella Ferris Pell went from her birth in 1846 in St. Louis, Missouri to a pauper's grave in Fishkill Rural Cemetery in New York in 1922. In between, a seemingly successful career does not explain her poverty-stricken destiny. Pell graduated in 1870 from the Design School for Women at Cooper Union in New York City after studying with the well-known sculptor William Rimmer. While still a student there in 1868, her sculpture of Puck received favorable notice in the New York Evening Post newspaper. She then attended the Academie des Beaux-Arts des Champs-Elysees in Paris in the 1880s, studying religious painting with Jacques-Fernand Humbert, portrait and genre painting with Gaston Casimir Saint-Pierre, and history painting with Jean-Paul Laurens. In between her studies in New York and France, Pell traveled in North Africa, the Near East and Europe for more than five years, exhibiting works including Water Vendor, Cairo, Egypt and La Annunziata, painted during her journeys, at the National Academy of Design in New York City. In the Paris Salons of 1889 and 1890, Pell exhibited The Angel Making Adam See the Consequences of His Sin, in the former and Salome and Portrait of Madame T., in the latter. Pell was regarded as an extremely able academic painter with a certain Baroque handling of light and dark exemplified in her fine and well known painting of Salome. Returning to New York City in the 1890s, Pell painted two mystical paintings, Storm Gods of Riz-Veda and The Evolution of Soul, as well as Agnus Dei, painted in 1899 and in the collection of the Columbus (Ohio) Museum of Art. In a more commercial vein, Pell had Christmas card and Easter designs published by color lithographer, Louis Prang. She also illustrated Through the Invisible, a love story by Paul Tyner which appeared in 1897.The Fort Ticonderoga Museum in New York has fifty-eight of her paintings in the Pell Family Collection. Source: Jules and Nancy Heller, North American Women Artists of the 20th Century, Askart.com,

From the collection and living estate of Valverde from Charleston SC area.

We ship inhouse using UPS ground for items over 1lb, USPS for items below 1lb and freight on a pallet for heavy items. We combine to save you money and charge $4 over the cost for handling and boxes. Normally we can ship 100lb on a pallet if oversize around $150 to a business address in the US. We use USPS for overseas shipments - quote at www.usps.com.

Customers can pickup in Killen AL to save shipping costs within 30 days.

Bidders can bid live (at Killen AL gallery), absentee or online. Full catalog with up to 11 photos per item are on www.estateroadshow.com. Lots are sold within a 1 minute time frame ... online bidders agree that bidding might be cut off and sold if delayed beyond the 1 minute. If you want the item, bid accordingly, this is our policy. Items are guaranteed to be as claimed or items can be returned. We normally sell all items at no reserve.

Due within 24 hours of event. You can call us for all credit card payments, use Paypal ([email protected]) or mail a check to:

We will not use the CC you have on file with AuctionZip.

We ship inhouse using UPS ground for items over 1lb, USPS for items below 1lb and freight on a pallet for heavy items. We combine to save you money and charge $4 over the cost for handling and boxes. Normally we can ship 100lb on a pallet if oversize around $150 to a business address in the US. We use USPS for overseas shipments - quote at www.usps.com.

Customers can pickup in Killen AL to save shipping costs within 30 days.

ONLY Floor Live bidders will be charged 4% sales tax, no taxes for online.

We guarantee our condition reports to be accurate. The full catalog is available online at www.estateroadshow.com showing several photos. Bidders have 24 hours after they receive an item to report not as described condition. Bidders will pay return postage.