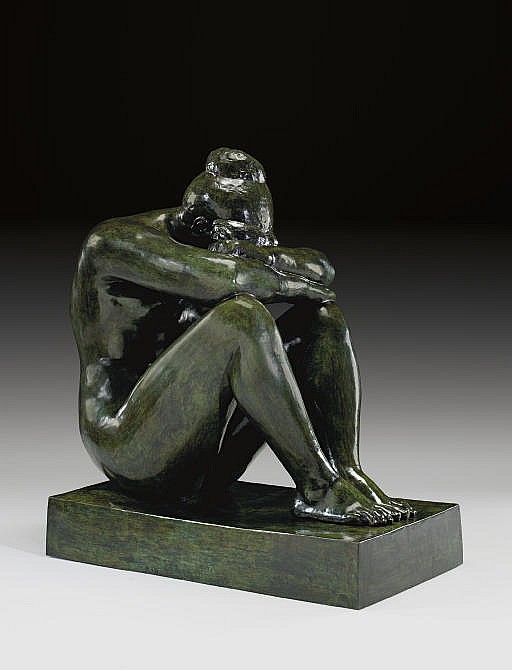 PROPERTY FROM A DISTINGUISHED EUROPEAN COLLECTION


Dina Vierny has confirmed the authenticity of this sculpture.

La nuit is among the best-known and most widely admired of Maillol's monumental sculptures. It is one of his earliest larger-than-life figures, and its scale notwithstanding, it retains the intimacy and simplicity of expression that collectors have long prized in Maillol's smaller tabletop sculptures. The figure is nominally emblematic of the night, an allegorical conception which the sculptor has expressed in a posture of rest and repose. Maillol chose not to identify night with unconscious sleep, and he has instead suggested a temporary state in which the figure has simply desisted from activity, and entered a passive period of rest, a state of mind and place removed from the cares and labor of daily living. There is an emotional aspect present here as well, which runs in a deeper current than is normally encountered in Maillol's sculptures; this repose carries a suggestion of world-weariness, tinged with introspection and perhaps even melancholy.

In titling this sculpture, Maillol was intentionally setting up a comparison with Michelangelo's La notte , one of four reclining figures that adorn the Medici Chapel in Florence (fig. 1). Michelangelo's embodiment of the night is characteristically muscular and heroic. There is little sense of repose; in her uneasy sleep this woman struggles with nightmares and inner demons. Rodin was acknowledged as the great heir to Michelangelo's powerfully expressive approach to modeling the figure. Linda K. Kramer has written, "Maillol admired Rodin's genius. He saw him as the master who had transformed the sculpture of his epoch, but he could not imitate his predecessor Maillol needed to find his own voice" (in Aristide Maillol: Pioneer of Modern Sculpture , unpub. doc. diss., New York University, 2000, p. 71). Maillol aimed to evoke emotion on a more modestly human scale, in which sculptural form would be based on an idea that suggested rather than declaimed the feelings it meant to inspire. Maillol dispensed with Rodin's overriding adherence to naturalism and expressive, tactile surfaces. John Rewald observed, "He did this in a style from which all grandiloquence is absent, a style almost earthbound and grave. The absence of movement is compensated by a tenderness and charm distinctively his own; and while all agitation is foreign to his art, there is in his [sculptures] such quiet grace and such warm feeling that they never appear inanimate" (in op. cit. , pp. 6-7). Maillol's restraint, and the degree to which he avoided dramatic gesture and outward display, are the hallmarks of a new classicism he brought to art at the turn of the century, which he transformed into his own widely influential vein of modernism.

Maillol commenced work on La nuit in 1902, and by the end of the year produced the initial version of this subject in plaster and stone, in the form cast here in bronze, in which the figure was modeled separately from its base. He took the pose from a small figure initially titled Tristesse , which he had executed as part of a proposal for a monument to Emile Zola, who died in September 1902. Maillol sought to express in the posture of this figure his dejection at the treatment which Zola had received at the hands of the government and public alike for his most famous and then still controversial act of advocacy, his defense of Alfred Dreyfus, a Jewish army officer unjustly convicted of treason amid a growing wave of anti-Semitism in France. Dreyfus was released from prison in 1898, but until he was finally exonerated in 1906, his case remained a dark and troubling chapter in recent French history, and a cause for intense soul-researching among many artists and intellectuals. Now transformed into a larger-than-life figure, the crouching woman became La nuit , which mysteriously evokes a private sadness and withdrawal from the world, while offering hope and eventual renewal through the power of meditative silence and rest.

Vollard had given Maillol his first one-man show in June 1902; it included tapestries and about thirty of his small figures. Vollard made some sales, and fellow artists were especially enthusiastic about the sculptures. Rodin, while examining Maillol's seated figure Léda , is reported to have remarked, "I swear I do not know of any modern piece of sculpture that is of such an absolute beauty, an absolute purity, so evidently a masterpiece" (quoted in Ibid. , p. 13). This reception encouraged Maillol to work more extensively on a larger scale, and in addition to La nuit , the sculptor also created during the next several years two other landmark monumental works of this early period, La Méditerranée (fig. 2) and L'Action enchainée (sold, Christie's, New York, 4 May 2005, lot 28).

Among Vollard's clients who began to collect Maillol's figures was the German Count Harry Kessler, who detected in them the influence of ancient Greek sculpture, which Maillol had studied in the Louvre. In April 1908, at Kessler's invitation, both he and Maillol traveled by boat to Greece, stopping along the way to study the Roman art in Naples and Pompei. Rewald noted that "Maillol felt at home at once in Greece; and this journey to the land of his 'ancestors' was less a revelation of unknown beauty than a confirmation of his own ideas and feelings" ( ibid. , p. 16). Maillol was especially drawn to Greek sculpture of the archaic period, with its simple presence and stately sense of expression, which he favored over the more naturalistic depiction of the human body seen in Greek marble sculpture of the fifth century B.C. and the Hellenistic period thereafter, which had strongly influenced Michelangelo and Rodin. Maillol wrote, "I prefer the primitive art of Olympus to that of the Parthenon. It is the most beautiful thing I have seen; it is more beautiful than anything else in the world. It is an art of synthesis, a higher art than ours today, which seeks to represent human flesh. If I lived in the VIth century I should have found happiness working with those men" (quoted in Ibid. , p. 17).

Maillol made some further refinements to La nuit following his return from Greece. In addition to its kinship with ancient Greece, this sculpture also reflects on the statuary of dynastic Egypt. Bernard Lorquin has pointed out, "It has the geometrical perfection of an Egyptian cube sculpture [fig. 3], but is all above all a new conception of human presence as expressed by sculpture. The introspective attitude of Night , its silence and inwardness prefigured what other attempted by every possible means. I am thinking particularly of the sculptures of Alberto Giacometti, in which the figure is reduced to its own inward being" (in Maillol and America , exh. cat., Marlborough Gallery, Inc., New York, 2004, p. 8).

Maillol first exhibited the newly finished limestone La nuit at the 1909 Salon d'Automne (it is presently in the Kunstmuseum, Winterthur; for a later bronze version, see fig. 4). Because he was on the organizing committee, he was able to place the sculpture in the middle of the rotunda of the Grand Palais. Rodin, who was in charge of the sculpture section, had planned to display one of his own works in the same location. When he learned that Maillol's La nuit was already in position, he conceded the space to his younger colleague, and declared, "Leave Maillol's figure where it is." When Rodin viewed La nuit the following day, he praised it and remarked, "One forgets too often that the human body is an architecture-a living architecture" (quoted in B. Lorquin, op. cit. , p. 66).