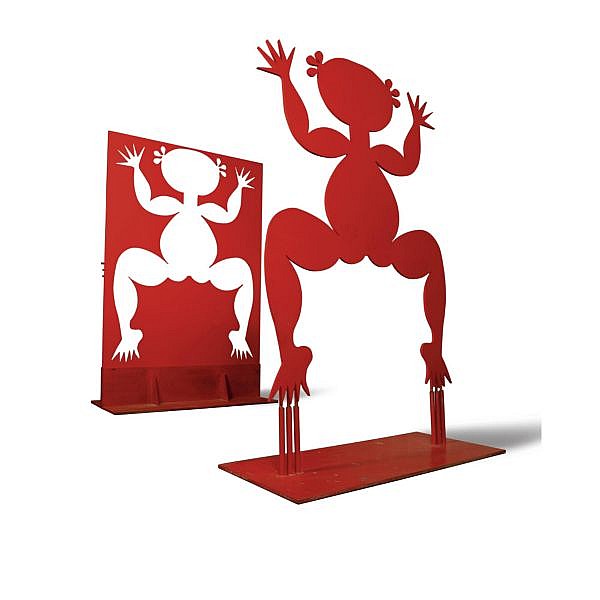 Chambers Fine Art, New York
Acquired by the present owner from the above

Executed in 2007.
Among the generation of Chinese artists who came to maturity in the 1980's, Lü Shengzhong has established a unique position. At a time when many artists of his generation either emigrated (Cai Guo Qiang, Huang Yong Ping, Xu Bing) or remained in China while absorbing a broad range of influences from Western art, Lü Shenzgzhong held firm to the area he had pursued in the Folk Art Department of Beijing's Central Academy of Fine Arts. While traveling extensively in China and developing considerable expertise, Lü conceived the idea that traditional paper cutting techniques, evolved over centuries, might be developed and utilized for highly ambitious, large-scale environmental works.

As Lü has remarked, "With the ending of the Cultural Revolution, China opened its long-closed doors to the outside world. 'The moon in the West is brighter than the one in China.' The public tried to imitate the West, the model for those Chinese who were eager to succeed. It was a very interesting time but it did not, in my opinion, leave behind much of lasting importance. Artists, too, tried to copy the west in so many ways. Even if a copy of a masterpiece looks more authentic than the original, it is still a copy. I am not always comfortable with the idea of "copy-ism" as you might call it. Thus, in the mid-1980's, I walked away from the cultural confusion of the time, and turned back to the villages, to traditional Chinese folk art."[1]

The present work, Shape and Shadow I (Lot 29), is among the most recent manifestations of an image that first appeared in 1985 and has dominated Lü's work since the early 1990's, the Little Red Figure. As Gao Minglu has pointed out, this animated silhouette can be traced back to Neolithic times and to ancient painted pottery and bronzes. Similar generic forms existed in Egypt, the Middle East and in various European cultures.[2]

Lü Shengzhong has created many hundreds of thousands of Little Red Figures during his working life. From Hall of Calling the Soul at the Central Academy of Fine Arts in Beijing in 1990 to more recent installations such as The Realm of Great Peace (2003), the Little Red Figure has been the matrix from which Lü has derived endlessly complicated dialogues between positive and negative space. Lü identified so closely with the technique of paper cut that, until recently, he was reluctant to experiment with materials more traditionally associated with sculpture when important public commissions gave him the opportunity to create works for the open air.

For the Guangzhou Triennial in 2002, however, Lü created Red Soul: Form and Shadow I, an installation of two groups of positive and negative forms. This was followed by Shape and Shadow: Mother and Son and a sequence of other unique Shape and Shadow works. In the present work, executed in red painted steel, the positive form of the Little Red Man confronts from a distance of several feet his negative form cut out of a rectangular sheet of steel. Although Lü began working in two dimensions as he elaborated the technical aspects of his craft of paper cutting, there has always been an inherently sculptural aspect to his practice given the paper/figure's status as object, however thin.

As Lü Shengzhong's Little Red Figure has grown in scale and permanence of material - from minuscule but vast multitudes pasted to sheets of paper or quivering in the breeze in some of the larger environmental works, and from paper to steel - it has become a presence to be reckoned with. It is simultaneously positive and negative, playful and serious, immediately recognizable in its specificity and yet intimately related to a basic representation of the human being that has survived from the earliest phases of recorded history to the folk art of today. [1] Lü Shengzhong, "The Way Forward," First Encounter, Chambers Fine Art, New York, 2000-2001, p. 5. [2] "Lü Shengzhong's Shaman and the Little Red Figure," The New Emerging from the Old, Lü Shengzhong: Works 1980-2005, University Art Museum, University of Albany, 2005, p. 42.